Promo: CATCH MY HEART: A VALENTINE'S COLLECTION by Lyssa Layne

The stories found within the pages are outtakes from some of your favorite Lyssa Layne books. 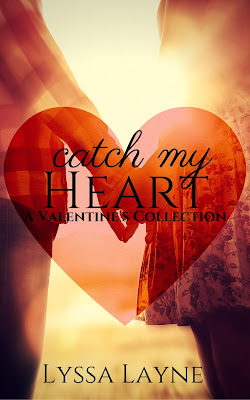 Follow these characters from your favorite Lyssa Layne books as they experience Valentine's Day in an unexpected, non-traditional fashion…

Love is a Fire/Burst Into Flame - Andy Garrity lost the love of his life almost three years ago. Giving in to his daughter-in-laws, he decides it's time to get back in the saddle and go on a first date for the first time since high school. Before he even meets his mate, Andy's having second thoughts and ready to pass on this opportunity at love.

Everybody's After Love/My Favorite What If - James Paul and Brianna Rossi are expecting their second child in less than a month. Brianna can't wait to have a daughter while James Paul is thrilled to have a new princess to spoil. Brianna has the perfect day planned for her husband until she’s blindsided in a way she never imagined.

Loved by the Linebacker - Recovering from a torn ACL, Blake Purser isn't used to taking it easy. He also isn't used to not having his best friend, Camila Lemos, spend more time with her boyfriend and his brother Evan than him. His long-time on-again, off-again girlfriend, Molly Feiser, is doing her best to entertain him during the off season but Blake isn't prepared for her latest news.

Holding the Other - Lee Maverick and Miranda Wallen are the king and queen of country music. The married couple have ruled the charts for the last ten years and fans love the chemistry between them. Before the night is over, this Valentine's Day will be one for the records.

My Favorite What If - Sloan Talbott and Jacob "Smitty" Smith are spending their first Valentine's Day as a couple. In the short time they've been together, they've carved out the perfect nook for just the two of them. Having spent the last six months in Italy, it's time they head back to the States and learn to be together with their meddling families surrounding them 24/7.

Love's not easy. Love's not perfect. Love hurts. Love doesn't last forever. Can these couples endure love at its ugliest or will it break them down more than they can endure?

“Love is a fire. But whether it is going to warm your heart or burn your house down, you can never tell.” -Joan Crawford

Dr. Katy Malone has sworn off love after losing those she loves most in her life including her father, a member of the FDNY. She has decided to spend her time focusing on her medical research. Her ex-fiancée, and fellow doctor, isn't ready to give up on loving her though.

Firefighter Nick Garrity is on a search for the future Mrs. Garrity. As he pushes thirty, with no prospects in sight, he's afraid he'll never find her. A devoted member of FDNY, he loves the thrill of his job and the satisfaction it brings him. He strives to teach the proby firefighter, Patrick Doyle, the ropes and pass on his passion to him.

When Doyle tries to impress the guys on the crew, he ends up in the care of Dr. Katy Malone. One look at Dr. Malone and Nick knows he's found his future wife but can he convince her to love again?

“In everyone’s life, at some time, our inner fire goes out. It is then burst into flame by an encounter with another human being. We should all be thankful for those people who rekindle the inner spirit.” -Albert Schweitzer

For Dr. Katy Garrity, life is a whirlwind, and the New York Fire Department is the heart of the storm. After claiming so many people she loved, including her own husband, Katy is left adrift, trying to keep up with a busy career, a baby son, and her loving extended family.

Her only anchor is Jesse O'Neil, her late husband's best friend. The charming former playboy has put his entire life on hold to care for Katy and her son. It's inevitable that sparks will flare between them, but all of life seems to be conspiring to keep them apart. Especially Katy's own heart, which shies away from trusting another firefighter.

Will the flames of passion burst into a lifetime of love? Or will secrets burn away their connection, causing Dr. Garrity to be burned again?

Jules Rossi’s world is about to be turned upside down when her big brother, Paulie, announces his engagement. Having been raised by her brother after their parents died, she’s used to him being her knight in shining armor and isn’t ready to share him with anyone else.

Throughout all the wedding festivities, Jules’ path continues to cross with Paulie’s future brother-in-law, Bentley Ladner. Bentley soon begins to take on Paulie’s role in Jules’ life, which neither of the Rossi siblings is too sure about. Can Jules cope with the secrets Bentley is keeping? Or will she lose his support when she finally decides to give love a chance?

In a man's world, Camila Lemos is one of the top sports agents in the market. The athletes beg for her attention, not just for business, but in the bedroom as well. However, feisty Brazilian beauty Camila is more than meets the eye and refuses to become involved with any of her clients, no exceptions.

Linebacker Evan Purser is the newest man in his family to join the NFL. Guided by his older brother and fellow teammate, he signs with Camila. Once the agent and the linebacker meet, anything but sparks fly.

As the tension rises, so do the feelings for one another, but neither will admit it. Evan can’t let go of the past. Camila’s not sure she can risk her reputation for love. When the walls are broken down, will a touchdown be scored or will it be yet another fumble for both?

On Valentine's Day, Country Music King Lee Maverick's life took a drastic turn when his wife, fellow country crooner Miranda Wallen, asked him for a divorce. It's exactly what both of them wanted but after ten years touring together, Maverick is unsure what his career will be like without Miranda.

Kyle Kelly, or KK as her friends call her, has been waiting for her big break into the country music scene. After another broken heart from a local guitar player, KK decides to give up on her musical aspirations, but her best friend, Brianna Rossi, refuses to let it go that easily.

Thanks to her best friend, KK joins the newly divorced Maverick in his singing endeavors. After spending the first part of the tour fighting their attraction for one another, they finally give in to the inevitable. Both think they've found their happiness... until Maverick's ex wants back in the picture, exactly where she left off.

One year after Jacob "Smitty" Smith is stood up at the altar, his good friend Jules encourages him to redeem his honeymoon package before it expires. Reluctantly, he agrees, and finds himself sitting beside free spirit Sloan Talbott, who is attending her sister's destination wedding at the same resort. Both have been hurt. Neither is looking for love. Will one week in paradise be a fling to remember or could it possibly lead to something more?

Lyssa Layne is first, and foremost, the proud momma to her precious daughter, AR. In addition to working full-time and being a mommy to AR, she is also an avid St. Louis Cardinals fan, a runner, blogger, and an infertility survivor.


Having watched one too many medical dramas and being inspired by author Rachelle Ayala, who introduced her to the world of indie writing, Lyssa decided to try her hand at writing a romance story. Her attempt turned into the Burning Lovesick series. You can find Lyssa's own interests throughout her stories although all stories are fictional.