Release Day-Review and Excerpt: Last to Know by Micalea Smeltzer 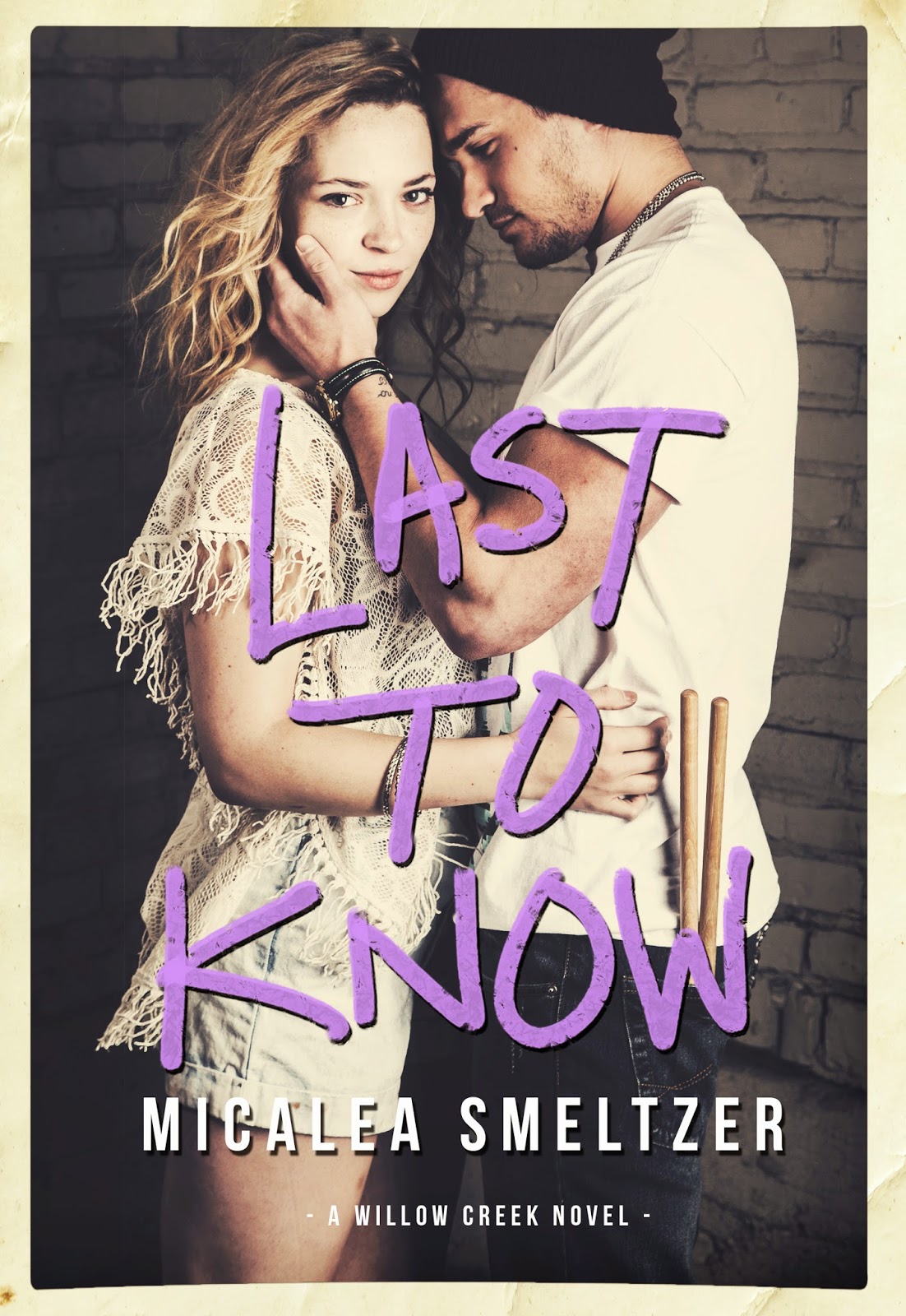 He was just a boy.
And I was just a girl.
But if that’s all there was to the story it wouldn’t be very interesting, would it?

Up and coming band Willow Creek is back in their hometown for the summer. For the drummer, Maddox Wade, this summer was meant for writing music and playing gigs.

Falling in love was not part of the plan.

One look at Emma Burke and those plans cease to matter.

Emma is quiet and guarded. She’s still hurt from her father walking out two years ago. She doesn’t want to trust Maddox, but with his dark hair, smoldering good looks, and infectious smile he’s impossible to resist.

Together Maddox and Emma embark on an unforgettable summer of adventures and first love.
Everything is perfect…or so Emma thinks.

There are things she doesn’t know, and when she finds out the truth it might shatter everything she’s built with Maddox.

No one said love was easy, and for Maddox and Emma it just might be impossible.

This is a Young Adult book. The following books in the series will be New Adult.

Only I would get arrested on my first date. And not even for something cool like smoking pot or indecent exposure. Nope, we got arrested for fleeing the scene—which somehow turned into resisting arrest—and were being charged a fine for trespassing.

“This is unbelievable.” I grasped the metal bars of the holding cell in my hands. “You told me we wouldn’t get arrested for feeding the ducks,” I hissed.

“Hey, at least it will be a nice story to tell your grandchildren one day,” Maddox reasoned. “And we didn’t get arrested for feeding the ducks.” I guess he was right about that—but feeding the ducks, did lead to the reason for our arrest, so it still counted in my mind.

I turned around to glare at him where he sat on the thin metal bench. “You think this is real funny, don’t you?” I shivered, because my clothes were still wet.

“I think it’s hysterical,” he grinned. “I mean, who knew swimming in a pond could get you arrested?”

“Apparently when there are signs telling you not to swim,” I glared at him. He wasn’t taking this seriously at all.

“Admit you were having fun,” he challenged. “Sometimes a little fun is worth the consequences.”

“And sometimes a little fun leads to getting arrested!” I shrieked. “And other times it leads to babies!”

He laughed, leaning his head against the cinderblock wall. “Boy, that escalated quickly. From arrests to babies—does this mean the next time we want to have some fun we try for the baby part?” He grinned crookedly, waggling his brows.

My mouth fell open. “You are unbelievable!”

“And you’re adorable when you’re angry,” he smirked.

“Oh, if you think this is angry then you haven’t seen anything yet.” I put my hands on my hips and leaned forward, leveling him with a glare.

“I see your boobs, does that count?”

Well that was one hell of an opener for the Willow Creek series.  Last to Know was thoroughly entertaining, wonderfully sweet...and I devoured this book over just several hours-I simply could not put it down.

Emma was so quiet and innocent, more of a bookish wallflower (and so totally relatable for me).  Having been hurt in the past by her father walking out on her and her mother, she doesn't trust easily.  Maddox...totally cocky, amazingly sweet and romantic, absolutely delectable...and carrying around his own traumatic family issues from the past-no matter how great his life is now.  And the two of them together just click perfectly.

The writing-pretty much flawless, flowing so smoothly and drawing me in so completely that before I knew it I was at the end (and reading that awesome bonus scene).  I loved the banter between Emma and Maddox, it was funny and the two of them played off each other so well.  The characters-both lead and secondary-really are what make this story...well developed, relatable, and you'll come to care about all of them.

The cast of supporting characters was extremely strong, adding amazing depth to the story, and guaranteeing that you'll want to hang around for the entire series to hear all of their stories.  Maddox has a twin brother, Mathias-almost his total opposite who was probably my favorite of the bunch (aside of Maddox himself of course!), and after hearing the small bit about his backstory here in Last to Know, I just can't wait to read his story next.

This rating is a no brainer, 5 outstanding stars, and I'd recommend this as a mature YA read due to some profanity.

Micalea Smeltzer is a bestselling Young and New Adult author from Winchester, Virginia. She’s always working on her next book, and when she has spare time she loves to read and spend time with her family.