Cover Reveals, Excerpt and Giveaway-Relaunch of The Gravity Series by Sarina Bowen 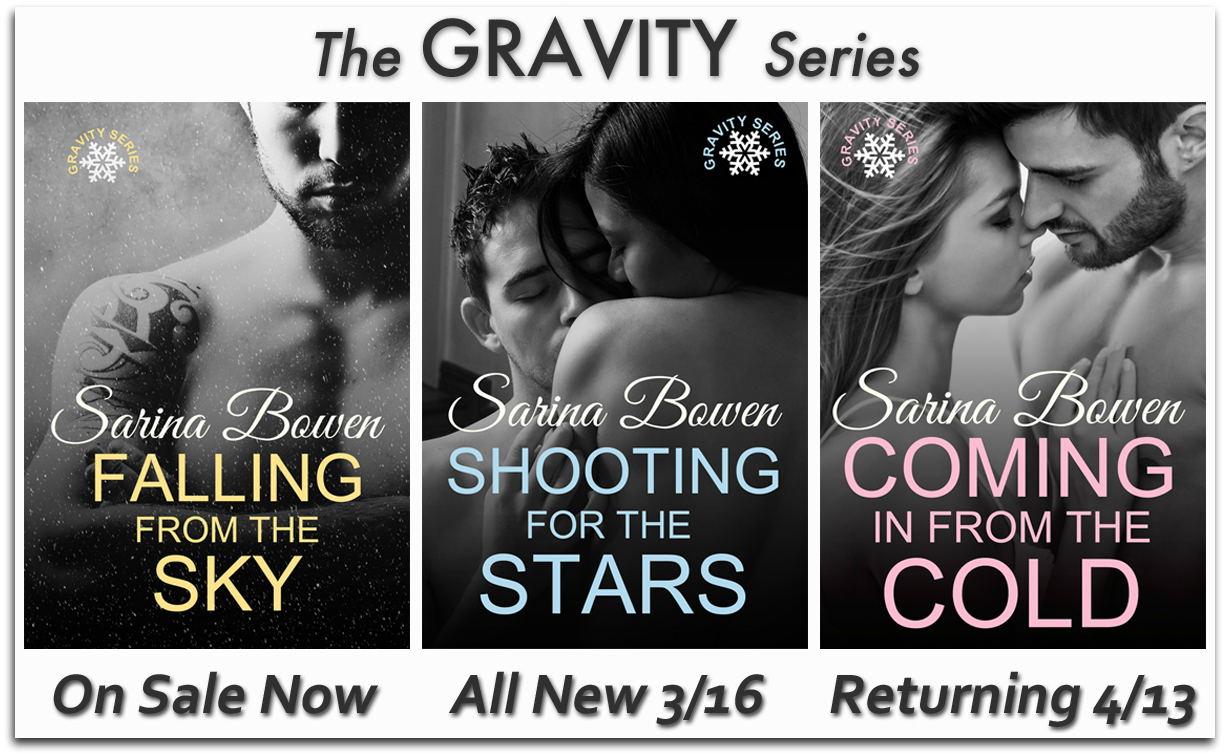 She's the woman he doesn't remember. He's the man she can't forget.

Bad boy Hank “Hazardous” Lazarus used to have everything: a gorgeous girlfriend, a career as a freestyle snowboarder and a spot on the US Olympic team. Nine months ago, after a bad crash in the half pipe, he woke up in the hospital, unable to move his legs. Now he’s landed there again, but gravity is not the culprit. With his family pressuring him to try a groundbreaking treatment, Hank self-medicates with too much tequila instead.

Doctor Callie Anders has the courage to restart a patient’s heart with a thousand volts of electricity, yet she’s afraid to risk her own. So she doesn’t confess to the clinic’s newest patient that they met just before the accident, an encounter that he doesn’t remember. Even as their friendship develops, she won’t admit she regrets turning down his dinner invitation, or that her heart stutters every time those inked shoulders roll through the door of the therapy department.

With another Vermont winter coming again, Hank needs a hand out from under the avalanche of his disappointments. If only Callie were brave enough to take the job.


"One of the highlights of my 2014 reading year." —Jane Litte at DearAuthor.com

"What a book! I’m always looking for different, inspiring, more in my books and Sarina Bowen delivers every time." — The Bookish Babe

"Sexy and heartwarming, Falling From the Sky is a story of redemption, trust and falling in love." — Mandi Schreiner of SmexyBooks

EXCERPT from FALLING FROM THE SKY

“Callie,” he cleared his throat. “You look really familiar.”

That wasn’t what she had expected him to say. It would have been as good a time as any to mention that they’d met about ten minutes before his accident, but she couldn’t bring herself to do it. Who would want to be reminded of that afternoon? “I’ve been here all week,” she said instead. “But we don’t expect you to keep track of the dozens of people who prod you all day.”

She sat down on a stool next to his bed. “That’s my fault. I need to know that they’re looking at your vitals every three hours. It helps me sleep.” She winked, and was rewarded with half a smile. “Now, quick—before the room is invaded again by nurses’ assistants—how’s your pain? Is there anything you need?”

Hank lifted one hand to his face, and Callie was glad to see it. If his injury had happened farther up his spine, he wouldn’t have been able to do that. With his palm, Hank rubbed several days’ worth of whiskers, which only served to make him look more rugged, while he considered her question. “Let’s see…I need a full rack of Curtis’ ribs, with spicy sauce and a baked potato. And I need to get the hell out of this hospital.”

She nodded obligingly, even though she couldn’t fulfill any of those requests. But if he was talking about food and getting out of here, those were both good signs. “You’ll be transferring to a rehab facility soon.”

“Yeah,” he sighed. His gaze wandered again, his eyes aiming at the window.

“The rehab place will let you sleep through the night,” she said, keeping her voice light. “And you’ll have your own clothes. I hear the food is better, too.”

“Couldn’t really be worse,” he said, turning to face Callie again. His dark eyes locked onto hers, and Callie felt the moment stretch and take hold. He didn’t say anything more, but he didn’t have to. Silently, an understanding passed between them. It didn’t matter if the food got better. Hank Lazarus was in for a sh*tty time, truly the sh*ttiest time of his life. The distance he’d come these past five days was a descent from the highest high to the lowest low. And there wasn’t a damned thing either of them could do about it.

“Hang in there,” Callie whispered. “This right here is the very worst part.”

He didn’t break their staring contest. “You promise?” he rumbled, his voice pure whiskey and smoke.