Blog Tour-Review, Excerpt and Giveaway: Cinderella and the Ghost by Marina Myles 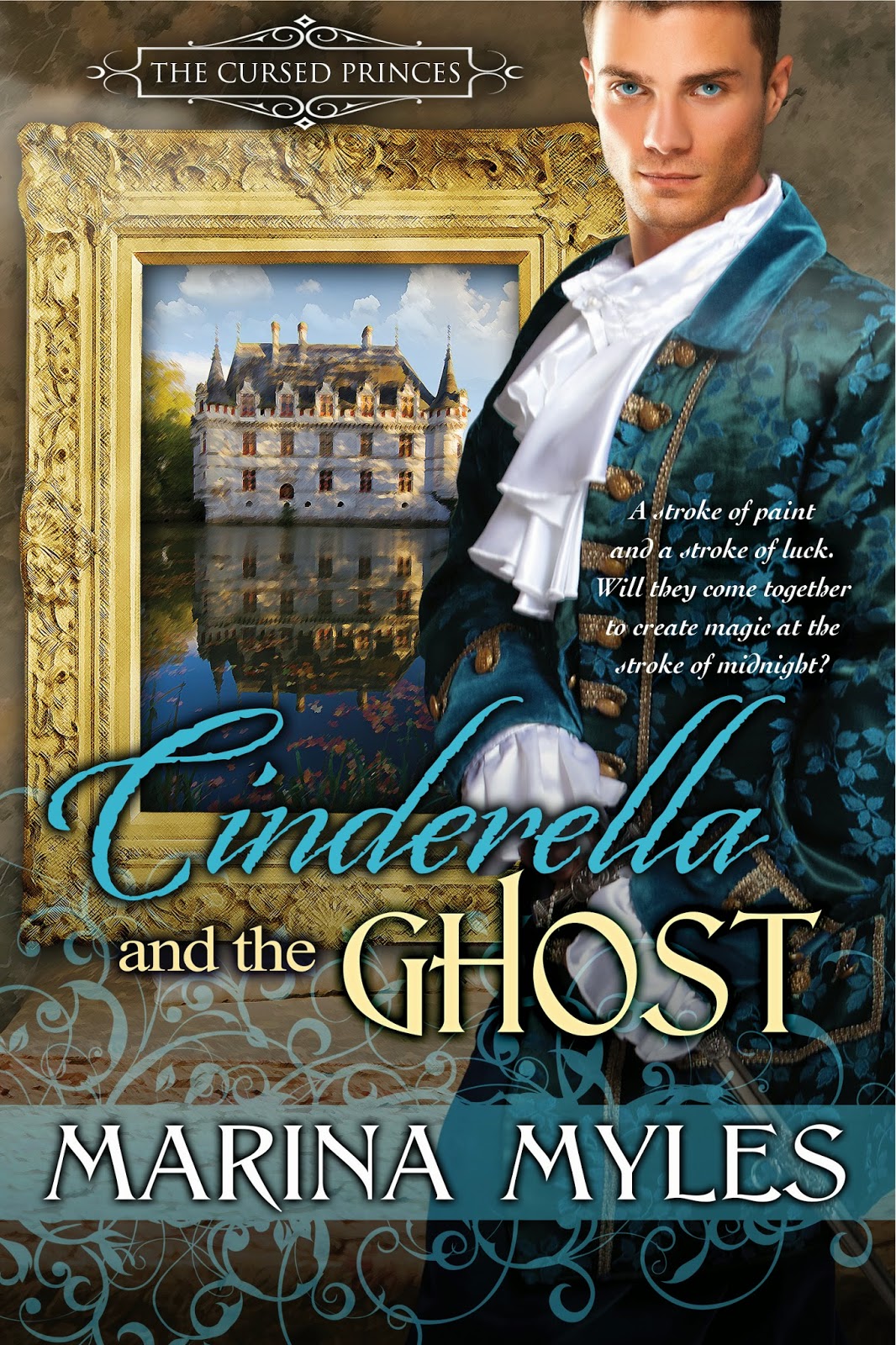 Synopsis
A stroke of paint and a stroke of luck. Will they come together to create magic at the stroke of midnight?

When her demanding stepmother died, Ella Benoit knew just how far their fortunes had fallen, unlike her spoiled stepsisters. So she never expected the bequest from her late father.

A chateau in France and the freedom to live her own life, all at once!

The chateau has seen better days, but Ella knows she can put the ruined house to rights. The life-size portrait of its first owner, Jean-Daniel Girard, seems to watch her work with approval, even pleasure. With bright blue eyes, strong features, and an athlete’s body, the viscount is a tempting sight even now, more than three hundred years after his tragic death.

But the more she looks at the portrait, the more convinced Ella is that she’s met Jean-Daniel before. In another life, perhaps—or maybe, as the form who haunts the halls at night, invading Ella’s dreams…

Excerpt – CINDERELLA AND THE GHOST

As Ella passed the drawing room, she halted. Eerie goose bumps blanketed her arms. Drawn to the room, she felt as though she’d been in it before.

She crossed the threshold under a sudden trance. Icy stabs of déjà vu assaulted her because the ornate furnishings and draperies seemed extremely familiar. Perhaps, she considered, I’ve seen the room in one of Adelaide’s real estate or decorating magazines.

Taking a few steps forward, she noticed a huge blank spot on the east wall. The area’s wallpaper not only showed a variance in color, it outlined a missing, life-sized painting or tapestry.

How odd. Why had the art work been removed? Where was it now?

An unrelenting force summoned her closer to the blank spot. Her inquisitiveness grew. If the missing object was indeed a life-sized painting, it must have taken forever to complete. She wondered about its subject. A landscape? More likely, a portrait.

Prodded to start a hunt, she went through several rooms on Château de Maincy’s main level. She searched the front parlor, the back parlor, and the music room. Her favorite was the ballroom. As she entered, a spark met her toes. Wide-eyed, she noticed that rays of sunshine cast a sparkling aura over its faded parquet floor. A glittering chandelier hung in the center of the gold-toned room and anchored the enormous space.

When the chandelier caught a beam of sunlight, Ella received another spark. She put her hand to her warm cheeks. She could almost hear strains of a quadrille—and the drone of chatter as if she were at a party.

Not a party. She rephrased the thought. A ball.

Eyes blurred, she slipped into a deeper trance. Suddenly, she was wearing a stunning costume and was stepping into waltz with a debonair nobleman sporting a mask. The nobleman pulled her tightly against him. Other guests wearing masks looked on.

It was a masquerade ball! More scenes flashed before Ella. Warm wind gusted into the room and then—

Exiting the trance, she realized that the hair on the back of her neck stood on end. Why in heaven had she experienced that?

Her father had written that Ella had been at the château before. Yet she had no conscious memory of the visit. Maybe, she thought as she rubbed her eyes, the atmosphere of this house is too seductive to resist.

Still reeling from the vision, her attention shifted to a long-case clock in the corner. Its shattered face was visible through a hinged glass panel that hung ajar. The top of the clock bore a large, vertical gash.

Ella inched closer. The open door revealed that the time-piece had been frozen at twelve o’clock. She touched the immobile hands—and in the bright light of the room, she noticed that the clock’s maker had etched his name and creation date into a groove bordering the clock’s pendulum.

All at once, Ella remembered standing in front of the long-case clock, precisely like this. But how could that be? She must have repressed memories from her visit here as a child. Yet, she couldn’t explain the vision of herself dancing with the handsome man.

Once she confirmed that a life-sized painting wasn’t hanging in the ballroom, she made her way up the grand staircase. Inexplicably, she felt drawn to where she was going. When she reached the second floor of the house, she studied a wall of faded frescoes depicting late seventeenth century life. When something told her to go on, she padded to the third floor landing.

A palpable hush filled the corridor ahead of her. Then a charged stream of energy rushed through the hall. Since all the curtains were drawn over the arched windows, the hallway sat in darkness and shadow. Ella should be doing so many things. Unpacking. Cleaning. Deciding which bedroom would be hers. But a sense of urgency prompted her feet to continue.

What will I find in this part of the house? Glimpses of the valiant but very dead Jean-Daniel Girard?

Gulping, she opened door after door and peeked in. She finally came to a storage space, with an additional staircase leading up to an attic. Creeping up those stairs, Ella surveyed the articles on the landing. Broken mirrors and articles of furniture draped in white sheets lay strewn about. Tangled strings of cobwebs swathed the wood paneling.

A glowing beam of sunlight angled into the room. Ella’s pulse sped. In the corner, she spotted an item covered with a black cloth. The object reclined against the far wall—and appeared to be larger than she was. Pushing the curtains open, she allowed more sunlight to bathe the space. Hands quivering, she moved back to the draped item and pulled away the black cloth.

The painting’s gilded frame was stunning. On it, Ella located a nameplate.

Slowly, as though her life was being altered with every centimeter, her stare ascended to the nobleman’s astonishing face. Instantly, the world fell into a compelling silence.

Jean-Daniel Girard was tall, muscular, and inarguably handsome. In fact, his good looks were so striking that Ella could barely breathe as she gazed upon them. More than that, she knew she’d seen his face somewhere before. While she racked her brain about where she’d seen it, her gaze roamed over Jean-Daniel’s sold body, penetrating aquamarine eyes, and angular features. He could be described as classically handsome. The epitome of male beauty, really. And thankfully, that classic quality helped him transcend the fanciful clothing and wig he wore.

Ella took a step in and studied him some more. True to subjects painted in that era, he wasn’t smiling. Rather, he seemed a pensive and a bit melancholy. However, she could tell from the laugh lines bracketing his generous mouth that he grinned often.

Incredibly lifelike, Jean-Daniel seemed capable of emerging from the painting right then and there. Ella’s skin tingled.

Her gaze drifted to the adorable dog sitting at the viscount’s feet. A splendid example of a hound, it possessed a gleaming brown-and-white coated, an open mouth, and a protruding tongue. Oddly, the dog seemed to be smiling.

“I can tell you loved your master,” she murmured.

Mesmerized by the man in the painting, Ella stared at his image for what felt like hours. The more she analyzed it, the more she noticed its “lost soul” quality. She crossed her arms. No, that wasn’t it. Instead, there seemed to be something underlying the viscount’s solemn face. As if he weren’t solemn at all. As if he possessed a sense of unfinished business.

To die so young…

She finally looked at the portrait’s backdrop. A vivid depiction of Château de Maincy surrounded Jean-Daniel. A cluster of servants was working in the fields adjacent to the splendid house. Wide-eyed bluebirds perched on the tree branches over his wigged head.

So that’s the way the estate looked in its heyday.

Stepping closer, she zeroed in on Jean-Daniel’s astounding eyes. They seemed to come alive—and for the briefest moment, he did as well. If only they were on a first-name basis! The thought exhilarated her.

While she and the figure locked stares, a new layer of goose bumps sprang up on Ella’s arms. She retreated. Despite the warmth of the room, a chill barraged her body.

“Jean-Daniel Girard is quite swoon-worthy, non?” whispered an unfamiliar voice.

Yes, I’m definitely one to love stories based on fairy tales, and now that I’ve read Cinderella and the Ghost, I’m wondering how I haven’t read anything by this author previously-and I’m now adding the rest of this series to my TBR list.

Although there are some places where the story gets a little sluggish, for the most part it moves along well and kept me entranced with its fantastic fairy tale storytelling.  That I just HAD to see what would happen next kept me flying through the pages.  The setup is just right, and prepares you well for the upcoming events.

This…*sigh*  Who wouldn’t want to travel back in time to save the one with whom they’re meant to be?  Especially when it’s Jean-Daniel.  The setup does a great job of letting us see who he really is-not the runaround playboy he once was, but the caring man in love with Ella.  Of course the fact that he’s absolutely gorgeous and stunningly sexy just adds to his allure.  And Ella’s character, meek and timid at the start, goes through a wonderful growth process to become a stronger person by the end.

There’s a great cast of secondary characters in both modern day and their counterparts back in 1703.  With the characters and the storyline doing such a great job in paralleling the original Cinderella fairy tale while throwing in the twist of time travel, Cinderella and the Ghost is an entertaining read that will keep you riveted to the story until the end.  The only loose end that I wish had been addressed was what happened to Jean-Daniel from 1703 in the end.

A fascinating take on the Cinderella theme, throwing in some pretty cool supernatural elements made for a solid 4-star read for me.  I’d definitely recommend to readers who love paranormal stories and variations on classic fairy tales…but make no mistake, this is definitely an 18+ read ;-)

Tour Giveaway
10 free iTunes downloads of CINDERELLA AND THE GHOST during my blog tour.
U.S. residents only.

Marina Myles’s love of books began as soon as she read her first fairy tale. During her college days in Dallas, she received degrees in English Literature and Communications—and enjoyed the unique experience of being a Dallas Cowboys Cheerleader. Now that she lives under the sunny skies of Arizona, she hasn’t left her glamorous life behind completely. After all, she gets to divide her time between her loving family, her loyal Maltese, and worlds filled with fiery—but not easily attained—love affairs.

Represented by Louise Fury of The Bent Agency