Spotlight-Excerpt & Giveaway: OVER THE IVY WALL by Rosa Sophia 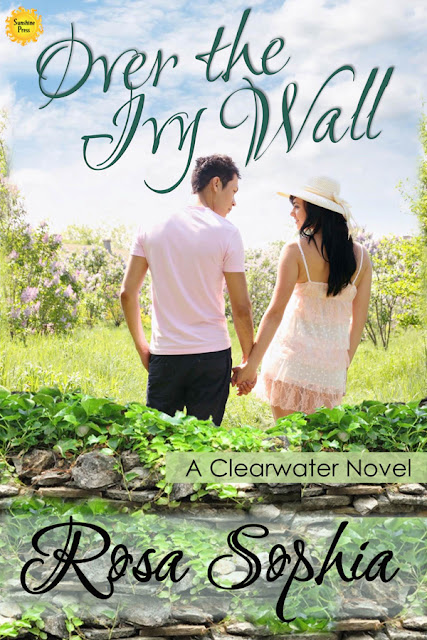 OVER THE IVY WALL
Rosa Sophia
Series: Clearwater Book 10 (multi-author series, standalone novel)
Genre: Romance, New Adult
Publisher: Sunshine Press
Publication Date: February 3, 2015
Add to Goodreads
Her only escape is Over the Ivy Wall...
Clara Pendleton is a prisoner in her home. Always searching for new places to hide from her uncle, whose drunken attention terrifies and confuses her, she finds a tiny clearing in the back of the property near a disintegrating section of the ivy-covered wall that surrounds the estate.
Gaven Bridge has been sent to Clearwater to live with his Uncle Daniel. Never fitting in, he doesn't believe he'll ever meet anyone who understands him. But when he goes out for a walk in the woods, he happens upon a young lady sleeping soundly on a patch of moss.
A deep bond is fostered between them, helping Clara find the courage to change her life. When she finally decides to climb over the ivy wall and out into the world, there is no going back. Will Clara escape her horrible past, or will it destroy the love she and Gaven share?
"I fell in love even more with Clara and Gaven as their stories unfolded. To know where they came from, the downfall of their lives due to things beyond their control, captured my heart and mind and left me missing them once the final page was turned."
- Crystal's Many Reviewers

Available for 99 cents only, or FREE on Kindle Unlimited.
Available at Amazon.com

She saw her uncle parking his red pick-up truck just as she darted toward the back of the house. He called out, “Clara, where’re you headed?” He sounded jovial enough, but she wasn’t buying it. He was never happy, especially not when Aunt Nan said he was having a rough week.

He followed her around the side of the house; she could hear his footfalls. He was a big man, and didn’t go unnoticed. There wasn’t much to the gardens, which Nan had once kept up herself until she hurt her back. Now a gardener came twice a week to look after the back yard, where rocks mapped out circular beds and little walking paths weaved around reflective ornaments and a few inquisitive-looking lawn gnomes.

Beyond that stretched a patch of wilderness and huge bushes that flowered during the spring and summer months. She’d seen animal paths through there, but would she fit? She panicked.

With only seconds to decide, she dove into the underbrush, throwing her jeaned knees onto the dirt, leaves, and twigs. She could at least tuck herself in here until he left, then figure out where else to go. She shoved her body in as far as she could, until she knew she couldn’t be seen.

Then she froze, knowing he was out there.

“Clara, where’d you scamper off to? It’s nearly dinnertime. Your Aunt Nan will be wondering where you went.”

She slowly shifted, careful not to make a sound. Through the dense foliage, she made out a corner of one of his shoes, then a flash of brown she was sure must be his slacks.

Maybe he’d given up. Or maybe he guessed she’d gone back inside. Regardless of the reason, it seemed as if he’d left a moment later. She didn’t want to check, frightened he waited for her out there.

She sat for a while as the sun began to set, and it grew darker faster inside the bushes. She brushed a spider off her arm, tugged her bag against her chest. She looked to her left and right, trying to decide what to do next. This path must’ve been made by raccoons or some other night creatures. It continued on, seeming to widen. Curiosity begged her to investigate…

Other Books by Rosa Sophia

Be sure to also check out the sequel to Over the Ivy Wall:
Buy Link: Available at Amazon.com

Rosa Sophia is the author of several novels, including Meet Me in the Garden and The House Guest (Limitless Publishing) as well as Over the Ivy Wall and Orion Cross My Sky (Sunshine Press). Rosa is an automotive mechanic, but everyone thinks she is a librarian. She lives in Florida and hopes to earn an MFA in Creative Writing one day. As a trigeminal neuralgia patient, she also writes about her condition-- read Orion Cross My Sky and Meet Me in the Garden --in the hope that it will spread awareness of this rare disorder.
Official website
Connect with Rosa Sophia: Facebook

Follow the book tour from July 3 - 15, 2017.
Discover more features, excerpts, reviews, interviews, fun facts and other extras on the tour.
To check the latest tour schedule, visit the Over the Ivy Wall Book Page at Book Unleashed.
In partnership with