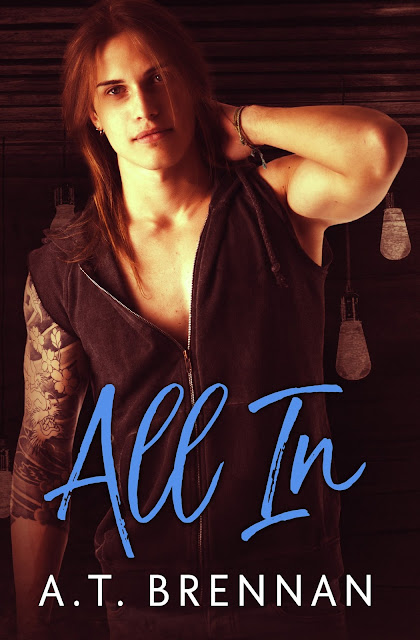 “I learned a long time ago that nothing is free, not even help.” ~ Blaze

Almost getting killed in a gay bashing should have been one of the worst moments of my life, but with everything I've been through, it was just another day, except for the gorgeous man who stepped in to save me. There is something about Galen that draws me in and makes me want know him, and the more time I spend with him, the more I feel free to be myself. Galen doesn't seem to know what he wants, but I'm a man who stays true to himself, and Galen seems to be someone worth taking a chance on.

"Then you happened and all you have to do is touch me and I lose myself." ~ Galen

I never thought I'd stumble on an attempted murder, but that's exactly what happened one night while I was trying to get home. After chasing away the assailants and helping the enigmatic young victim home I tried to put the incident out of my mind, but I couldn't get him out of my head. I might not have ever thought about being with a man before, but the more time I spend with Blaze, the more I learn about who I really am. Blaze has scars that run deep, but as he opens up to me I find myself questioning everything I thought I wanted, and wondering if I'm a good enough man to give him what he needs.

The alarm on my phone was going off and I’d reached up to silence it while half asleep. That move had sent a wave of pain through my body that was so sharp it felt like a cinder block had been dropped on me.

It took me almost thirty seconds to get myself close enough to the phone to silence the alarm, and then a full minute to sit up.

My entire body hurt from my ankles to the tips of my fingers. I felt like death warmed over, but I had to get up.

Last night had been buckets of f*cked up, and not just because I’d almost had my head stomped.

Getting jumped sucked, almost getting killed was sobering, but it was meeting Galen that had my head spinning.

Who would have thought my Good Samaritan would be the hottest man I’d ever seen, and he’d been nice.

I had no idea why he’d wanted to help me, why he’d insisted on taking care of me. Other than my makeshift family at the bar no one had ever shown me that kind of concern, and it was a little unnerving.

The weirdest part was how he hadn’t wanted anything in return, and he’d actually given me his card and offered his legal services for free. What the actual f*ck? Nothing was free, but he was straight so I was guessing he didn’t want the type of repayment that was normally demanded from me.

I think I need a cold shower after that.  All In was HOT.  Not only was it hot, it’s an excellent story, written very well with strong characters who are flawed, with complex pasts, and to whom I quickly became attached early on in the story.  For a debut M/M novel, A.T. Brennan did an amazing job and I’ve now put her on my list of authors to watch in the genre.

From the moment Blaze and Galen meet, there’s a strong emotional connection between them—it’s obvious and only gets stronger and deeper the more time they spend together.  Blaze has been so beaten down in his life and keeps surviving through his sheer strength of will, and Galen wants nothing more than to be there for him…never expecting the powerful attraction that erupts between them.  Galen is truly one of the good guys, helping for no other reason than because it is the right thing to do—something Blaze has not really seen for most of his life.

Chemistry?  Just make sure you keep a fire extinguisher handy.  You’ll be hard pressed to find two men more right for each other than Galen and Blaze, and that’s never more evident than when things get hot and heavy…again…and again…and…yeah, keep the batteries charged as well.  Their intimate scenes are distinctly erotic and while you might think otherwise, they’re actually not necessarily gratuitous as they do demonstrate how deeply the connection between the two men goes, and how it continues to strengthen over time.  And it’s not just those scenes that show the development of their relationship—there’s a heck of a lot more to this story than sex (that’s just a really nice bonus).

What Blaze goes through will make your heart hurt for him, and some parts of that might be disturbing for some readers as he does go through a gay bashing, and some portions of his younger years while he was still living at home move past the disturbing point as well.  His self esteem is damaged by his past, and it’s Galen who helps him heal.  At the same time, Blaze helps Galen realize who he really is inside, and Galen’s strength of character shines once he comes to terms with his true self—especially when it comes to his family.


Filled with a load of emotion that had me not wanting to put this book down, All In was a 5-star read for me, and I highly recommend it to any M/M romance fan.  I would put it in the hurt/comfort category, with a bit of coming out as well.  This is definitely re-read material for me, and I’m really looking forward to reading more in the series—this author has impressed me with her M/M debut novel, and I’ll be keeping an eye out for more to come.  This book is meant strictly for readers 18+ for adult language, explicit erotic sexual content, and some disturbing scenes as mentioned previously.


GIVEAWAY:
Win an ebook of your choice (gifted via Amazon)

A.T. Brennan, who also writes under the name Mandie Mills, is a romance and erotica author. A native of Ottawa, Canada, she enjoys picking up and moving from city to city every few years. A former member of the Canadian Armed Forces, current entrepreneur and freelance writer, she enjoys spending her days working on her many projects and her nights writing and not getting enough sleep. Currently she lives on Canada's East Coast with her family, both two- and four-legged. She enjoys collecting books and exploring the different sides of romance and romantic expression in her works.