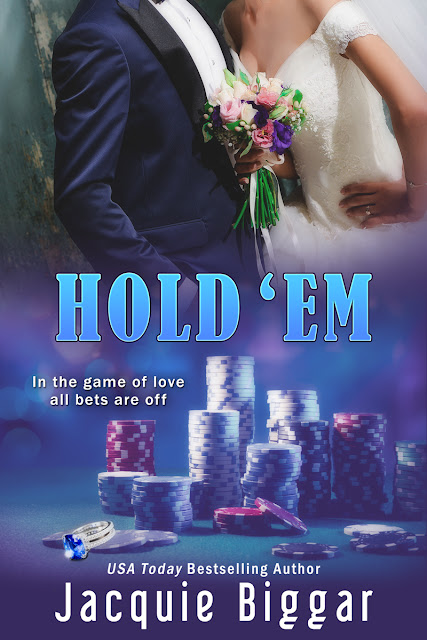 In the game of love all bets are off

When professional poker player Matthew Shaughnessy wins the pot of a lifetime, he didn't expect to land himself a fiancée.

Cassandra Gardener is left with little choice but to play the part of a Texan's fiancée for a week if she wants to clear her father's gambling debt.

Can two people with so much to lose win the biggest bet of all- love?

Cassandra gazed in astonishment at the small town laid like a sparkling blanket in the foothills outside of Austin, Texas.

“This is your home?” She came from a well-off family and had grown up visiting her friends sprawling mansions and fancy condos, but this was something altogether different. They’d landed in Austin’s International Airport mid-morning and had traveled south almost non-stop since. She was hungry, tired, her butt hurt, and she really needed to pee, but all of her discomforts were temporarily forgotten as she took in the scene on the horizon.

She looked at Matt and caught the gleam of his smile in the dashboard lights.

“Yep, that’s home,” he said, voice ringing with pride. “Not what you expected, Princess?” He slowed to a stop and rested his arm on the steering wheel to look at her. “It still grabs me that way, and I grew up here. It’s been in our family for five generations and Grannie has managed it for the last fifty years. We have two hundred forty-seven employees and run cattle and horses across two hundred and fifty thousand acres. It hasn’t all been a bed of roses, but an oil find back in the seventies helped make her what she is today.”

“It’s beautiful, Matt.” Cass was unaccountably moved by the obvious love he had for his childhood home. With a father who had been in the military before his appointment to the Canadian Senate, she’d lived in a variety of countries and houses—she could never call them homes. She envied him his heritage.

Uh, sure,” she answered, while inside the jitterbugs started dancing again. Anyone who managed an operation this large had to do it with an iron hand. She pictured Matt’s grandmother with a baseball bat in one hand and a horsewhip in the other.

He shifted into gear and the truck started rolling toward the pit of doom. “Don’t worry, they’ll love you.”

Sure they will. Until they found out the engagement was a big, fat hoax—then, all bets were off.

The ranch house sat on a knoll overlooking the rest of the complex. As they drove up, lights flickered to life behind gauzy white curtains. The double Spanish style entry doors of the hacienda-type structure swung open, and what seemed like half the village spilled out onto the courtyard.

Cassandra turned accusing eyes on Matt. “You told them we were coming.”

He grinned and shut off the truck. “Of course, I did. The eldest son is bringing home his future bride. It’s cause for celebration.”

Before she could blister him with the words on the tip of her tongue, he hopped out and held his arms open to a gorgeous young woman who’d been practically jumping up and down since they pulled up. More arms opened, and more, and soon he was swallowed from view. Cassandra wished she could vanish herself. Back to before she ever knew Matthew Shaughnessy.

Short of sliding into the driver’s seat and disappearing into the sunset—oh, so tempting as it was—Cass pulled up her big girl panties and opened the door of the truck. The noise hit her first, a cacophony of laughing and crying, and what seemed like a hundred voices talking all at once. This was ten times worse than meeting Jeff’s family. For one thing, he hadn’t deserted her like bait left out for the wolves to find.

A pair of muscular arms wrapped around her waist and lifted her off the seat to her startled shriek. She had a blurred vision of laughing blue eyes, then she was swung around and set down in the middle of the crowd. A younger, carbon-copy version of Matt leaned down and kissed her cheek before he stepped back after a stern warning from a tart voice.

And then Cassandra was face to face with the matriarch of the Shaughnessy family.

Far from the dragon lady she’d been imagining, Matt’s grandmother looked as though sugar wouldn’t melt in her mouth. Slim, tiny, with smooth unlined skin and hair that still retained much of its natural thickness and wave—though Cass had been told the chemo was taking its toll—she rolled closer and held out her hand, the wheelchair cutting a swath through the crowd.

“So, you’re the young lass who stole my grandson’s heart.”

Cassandra squirmed under her piercing gaze and cursed Matt for leaving her alone. She gently took the old woman’s papery hand in greeting, but when she tried to let go, Grannie tightened her grip.

“Let’s have a look at you then,” she said as if Cass was a horse at market. Should she show them her teeth?

“Gran, let my fiancée go, you’re scaring her,” Matt’s laughing voice came from behind Cass. She turned… and his lips grazed her cheek to take possession of her mouth.

She froze, shocked to the core by the heat and textures bombarding her senses. His mouth stilled, then moved against hers, soft and demanding at the same time. The noise faded, taken over by the buzzing of her pulse and the encouraging murmur coming from his throat—or was it hers?

A loud war-whoop from nearby broke them apart. Cass stared into his chocolate brown eyes and saw the same bemused arousal that she was feeling. Not good. Not good at all.

She yanked herself out of his grasp and turned back to Grannie, ignoring the cheers for more from the crowd. “Is there some place I could get cleaned up? It’s been a long trip.”

Grannie’s speculative gaze turned sly. “Of course, honey. We don’t stand on ceremony around here. I know how you young people are so I had Sophia put you in the adjoining suite next to Matthew. Matt, take her to your room, son.”

“Oh, but,” Cass protested, but Matt cut her off.

“I missed you, Gran.” He leaned down and gave his grandmother a hug filled with a little boy’s love. “We’ll let you get off to bed and talk more in the morning. I can’t wait for you two to get to know each other.” He grinned at Cassandra and grabbed her hand. “C’mon, darlin’, time to hit the hay.”

Cass stumbled along behind him, not sure how she’d managed to fall down this rabbit hole.

JACQUIE BIGGAR is a USA Today bestselling author of Romantic Suspense who loves to write about tough, alpha males who know what they want, that is until they're gob-smacked by heroines who are strong, contemporary women willing to show them what they really need is love. She is the author of the popular Wounded Hearts series and has just started a new series in paranormal suspense, Mended Souls.

She has been blessed with a long, happy marriage and enjoys writing romance novels that end with happily-ever-afters.

Jacquie lives in paradise along the west coast of Canada with her family and loves reading, writing, and flower gardening. She swears she can't function without coffee, preferably at the beach with her sweetheart. 🙂

Jacquie lives on Vancouver Island with her husband and loves to hear from readers all over the world!

You can join her street team on Facebook, her exclusive Review Crew or sign up for her newsletter.