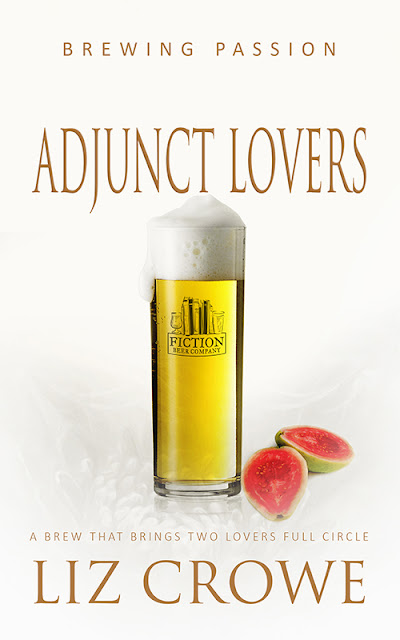 When Ross and Elisa open their new business in Detroit, they believe they’ve embarked on a dream life, complete with their beloved, precocious daughter. But owning and running a restaurant is not for the faint of heart, and Elle quickly becomes laser-focused and obsessed, while Ross spends his days consulting, or concocting new beers on his pilot system—and wondering why she won’t agree to set a date for their wedding. When their restaurant—named “Komfort” for its focus on the comfort foods of various cultures—is featured on a nationally televised tour of hot new eateries, its popularity shoots into the stratosphere, and Elle’s stress level reaches a breaking point.
Faced with a mutual inability to communicate beyond their robust sex life, Ross issues an ill-considered ultimatum: the restaurant or him. Stunned when she refuses to consider such a ridiculous demand, he’s forced to come to terms with his own selfish tendencies. Hoping to repair the damage he’s done, he concocts a new beer inspired by her, using a recipe for a classic German-style Kölch. He crafts the final product using a special ingredient designed to catch Elle’s attention. It does. But not necessarily the way he’d planned.
“Adjunct Lovers” fills in the story begun in LIGHTSTRUCK, and provides a closer look at Ross’s and Elle’s complex personalities as they make their sexy way toward happily ever after—with the help of a very special brew. 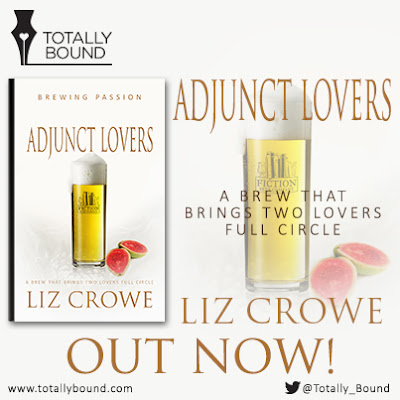 “Thank you,” she said. “I appreciate it that you came when we called.” He raised an eyebrow at her, as if expecting more than this dry, generic declaration. She kept her fingertips dug into his arm, clinging to him as figuratively as she was literally. “I…I love you.”
“I know that, Elisa.” He plucked her hand off his arm. She let it fall to her side. “But I don’t quite get where we stand right now.”
She dropped her gaze, wrung her fingers, then let a rush of ill-conceived anger speak before she could edit herself. He’d spoken in English but she let fly in their native tongue. “Where we stand? Where we stand is here, together.” She gestured upward to the building’s original art-deco marquee they’d kept as their sign, putting up a different message every week, as if it were still a theater. “This was your f*cking idea, Hoffman. You wanted it and you helped make it happen. But now, you have got to stop making me feel guilty for running it, for managing it, for trying to make it as successful as…as…as you are. You with your fancy consulting jobs, overpriced pilot systems and f*cking dangerous motorcycles.”
His eyes narrowed.
Elle was suddenly hyper aware that they were causing a scene. Her face flushed hot but her hands and feet stayed ice cold. Another symptom of her pregnancy, she knew. But that was not something she wanted to share with him, not yet. “A motorcycle that cost how much? How much did you pay for that deathtrap, hmm? Mister ‘I’m German and we’re savers?’ Jesus, Ross, I don’t even know when this place will turn a real profit. I mean, it’s getting better but…I…I’m terrified. Every day I’m afraid we made the most horrible mistake ever using your money, our friends’ money. Oh Christ.” She put her hands over her face, mortified that she’d been yelling at him in German while the staff pretended not to notice.
Part of her wished, hoped, prayed that he’d take her in his arms and assure her that it hadn’t been a stupid mistake. That she’d make it work, he knew it. That he’d never have put his own money into it if he thought any different. That she, he, they would be fine.
But when she dropped her hands, he hadn’t moved an inch. His eyes were sharp and his face flushed with what she knew damn good and well was rage. Her own barely concealed fury rose to meet it.
“Do you honestly think,” he began, using German this time, his voice low and dangerous-sounding. “That I would have given up that much of my savings, that I would have gone to Austin and Evelyn on your behalf, that I would have spent a year playing Mister Mom for our child if I didn’t believe that you would make this work?”
She sucked in a breath. Something her grandmother had said to her once, about how men show affection, rose in her roiling brain.
‘Our men, they’re strong, like oxen. They’re stubborn, like mules. They’re responsible, like elephants. They are fighters, not lovers. Don’t ever confuse yourself into thinking otherwise. They’ll prove their love to you through their acts, the things they do to support you and your family. But they will rarely show affection. Forcing one to do so will make him retreat from you and withhold the love he has for you until you leave him be and let him show it the way he feels is best.’
She’d never once in her life ever recalled that, until this moment, standing on the busy sidewalk, staring at her own stubborn, strong, responsible, loving German. She reached for him but he backed away, holding up his hands. Retreating and withholding, just like her old-fashioned Oma had warned her that he would.
Of course, her Ross was affectionate. He had no qualms about kissing her, holding her hand, showing his love for her in public or private. But he was, in his genes, a good German man, even if he’d been raised like a spoiled American. “I’m disappointed in you, Elisa. And I’m hurt that you’d think for one god damned second that I didn’t support you in this.” He parroted her wave, indicating the sign over their heads. “Now, I need to go get our daughter and take her out for the day. You know, the way I always f*cking do every god damned weekend of our lives while you’re here, living your dream and running your restaurant.” He paused and put his hands on his hips.
“But…” She started after him, hating herself and formulating her apology, combined with agreement that they should set a wedding date, considering her condition. When he turned again, he almost ran right over her.
“And one more thing. I bought my motorcycle with money we agreed I could use for it. Same goes for my motherf*cking pilot system. So I will thank you not to act like I hauled off and spent the bloody rent money on it and left you without a fridge full of food or our child without clothes on her back.”
He stared down at her, but she met his gaze, unintimidated, unafraid. She reached for his hand, ready to beg his forgiveness, but he yanked it away from her. “I’m not in the mood, Elisa. Go on. Run your precious Komfort. I’ll take care of everything else.” 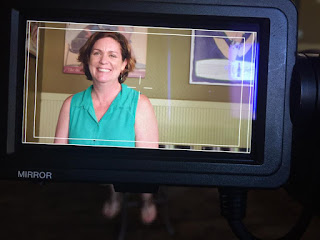 Amazon best-selling author, mom of three, Realtor, beer blogger, brewery marketing expert, and soccer fan, Liz Crowe is a Kentucky native and graduate of the University of Louisville currently living in Ann Arbor. She has decades of experience in sales and fund raising, plus an eight-year stint as a three-continent, ex-pat trailing spouse

Her early forays into the publishing world led to a groundbreaking fiction subgenre, “Romance for Real Life,” which has gained thousands of fans and followers interested less in the “HEA” and more in the “WHA” (“What Happens After?”).
With stories set in the not-so-common worlds of breweries, on the soccer pitch, in successful real estate offices and at times in exotic locales like Istanbul, Turkey, her books are unique and told with a fresh voice. The Liz Crowe backlist has something for any reader seeking complex storylines with humor and complete casts of characters that will delight, frustrate and linger in the imagination long after the book is finished.
Don’t ever ask her for anything “like a Budweiser” or risk bodily injury.