Review & Giveaway: DOWN ON THE FARM by Silvia Violet (Ames Bridge #1) 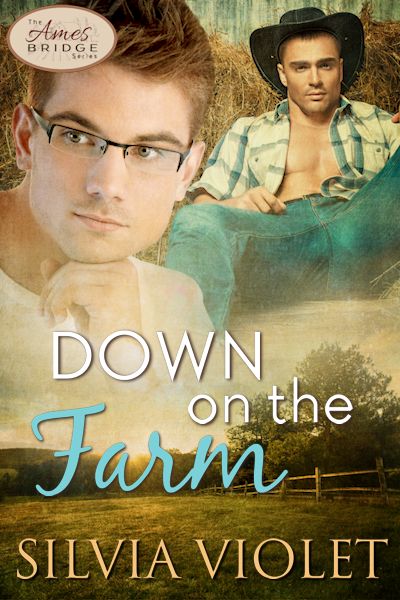 Down on the Farm, a sexy, enemies-to-lovers, small town romance, is the first book in the Ames Bridge series.

After quitting his teaching job on the heels of a scandal, Beck Davis moves to the house his grandmother left him in Ames Bridge. He finds the town stifling, but it's a quiet place to hide while he regroups. Or so he thought.

His neighbor Cal McMurtry shows up, demanding to buy Beck's land. Cal is as infuriatingly sexy as he was ten years ago when he and his jock friends spent their summers taunting Beck.

Beck expects to hate Cal as he did back then, but Cal isn't who Beck thought he was: he's hardworking, passionate about revamping and diversifying his family's farm, and-far more shocking-he's gay, and interested in Beck.

But as much as they want each other, Beck has no intention of staying in Ames Bridge, and while Cal is technically out, he refuses to date openly. A real relationship seems doomed from the beginning, but love can be a powerful motivator for those willing to take a chance.

So far my experience with this author’s books has been her Thorne and Dash series (which I absolutely LOVE), and Revolutionary Temptation (historical romance)…so with this story being more of a regular contemporary romance I had to adjust my mindset a bit.  Here in Down on the Farm, we get a bit of an enemies-to-lovers/friends with benefits vibe where being gay in a small, conservative town is what provides the conflict.

Individually I really liked both main characters, Cal and Beck.  What stood out for each of them for me was Beck for standing up for his rights and being just an all-around great guy, and Cal for working hard and making a success of his family’s farm.  There was still the matter of how Cal treated Beck back when they were teenagers, something that it seemed like Beck forgave Cal for rather easily once he found out the reason behind it.

Together, they had plenty of physical chemistry, and besides that they just seemed to click together naturally as friends.  But Cal, while out as gay, felt there was a huge difference between the town knowing that and the town actually seeing him with someone, and he uses this as an excuse to keep his and Beck’s relationship a secret.  There was a bit of back-and-forth between them because of this, and for me I did grow a bit tired of that.

I loved the whole small town setup with everyone knowing everyone else’s business, and while that might be something I’d find personally aggravating if I had to actually live in a place like that, it sure makes for a fun setting for the story.  I also liked a lot of the supporting characters in the town, in particular Irene, Elsie, and Trish who were so supportive of both Cal and Beck.

Down on the Farm was a 4-star read for me and I’d recommend it to any M/M romance fan.  While not as steamy as some of this author’s other books, there’s still plenty of heat to be found here…which, along with the adult language, makes this story an 18+ read.

Silvia Violet writes fun, sexy stories that will leave you smiling and satisfied. She has a thing for characters who are in need of comfort and enjoys helping them surrender to love even when they doubt it exists. Silvia's stories include sizzling contemporaries, paranormals, and historicals. When she needs a break from listening to the voices in her head, she spends time baking, taking long walks, curling up with her favorite books, and spending time with her family.