Review, Excerpt & Giveaway: THE RUIN OF A RAKE by Cat Sebastian

The Ruin of a Rake
By: Cat Sebastian
Releasing July 4, 2017
Avon Impulse 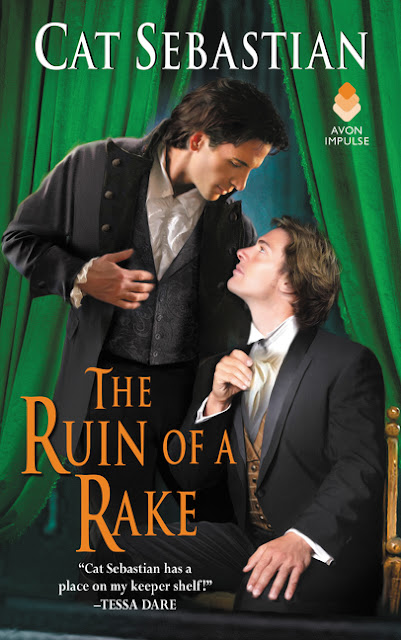 Rogue. Libertine. Rake. Lord Courtenay has been called many things and has never much cared. But after the publication of a salacious novel supposedly based on his exploits, he finds himself shunned from society. Unable to see his nephew, he is willing to do anything to improve his reputation, even if that means spending time with the most proper man in London.

Julian Medlock has spent years becoming the epitome of correct behavior. As far as he cares, if Courtenay finds himself in hot water, it’s his own fault for behaving so badly—and being so blasted irresistible. But when Julian’s sister asks him to rehabilitate Courtenay’s image, Julian is forced to spend time with the man he loathes—and lusts after—most.

As Courtenay begins to yearn for a love he fears he doesn’t deserve, Julian starts to understand how desire can drive a man to abandon all sense of propriety. But he has secrets he’s determined to keep, because if the truth came out, it would ruin everyone he loves. Together, they must decide what they’re willing to risk for love.

Julian pursed his lips as he gazed at the symmetrical brick façade of his sister’s house. It was every bit as bad as he had feared. He could hear the racket from the street, for God’s sake. He pulled the brim of his hat lower on his forehead, as if concealing his face would go any distance toward mitigating the damage done by his sister having turned her house into a veritable brothel. Right in the middle of Mayfair, and at eleven in the morning, when the entire ton was on hand to bear witness to her degradation, no less. Say what one wanted about Eleanor—and at this moment Julian could only imagine what was being said—but she did not do things by halves.

As he climbed the steps to her door, the low rumble of masculine voices drifted from an open second story window. Somebody was playing a pianoforte—badly—and a lady was singing out of key.

No, not a lady. Julian suppressed a sigh. Whoever these women were in his sister’s house, they were not ladies. No lady in her right mind would consort with the sort of men Eleanor had been entertaining lately. Every young buck with a taste for vice had made his way to her house over these last weeks, along with their mistresses or courtesans or whatever one was meant to call them. And the worst of them, the blackguard who had started Eleanor on her path to becoming a byword for scandal, was Lord Courtenay.

A shiver trickled down Julian’s spine at the thought of encountering the man, and he could not decide whether it was from simple, honest loathing or something much, much worse.

The door swung open before Julian had raised his hand to the knocker.

“Mr. Medlock, thank goodness.” The look of abject relief on the face of Eleanor’s butler might have struck Julian as vaguely inappropriate under any other circumstance. But considering the tableau that presented itself in Eleanor’s vestibule, the butler’s informality hardly registered.

Propped against the elegantly papered wall, a man in full evening dress snored peacefully, a bottle of brandy cradled in his arms and a swath of bright crimson silk draped across his leg. A lady’s gown, Julian gathered. The original wearer of the garment was, mercifully, not present.

“I came as soon as I received your message.” Julian had not been best pleased to receive a letter from his sister’s butler, of all people, begging that he return to London ahead of schedule. Having secured a coveted invitation to a very promising house party, he was loath to leave early in order to evict a set of bohemians and reprobates from his sister’s house.

“The cook is threatening to quit, sir,” said the butler. Tilbury, a man of over fifty who had been with Eleanor since she and Julian had arrived in England, had gray circles under his eyes. No doubt the revels had interrupted his sleep. “And I’ve already sent all but the—ah—hardiest of the housemaids to the country. It wouldn’t do for them to be imposed upon. I’d never forgive myself.”

Julian nodded. “You were quite right to send for me. Where is my sister?” Several unmatched slippers were scattered along the stairs that led toward the drawing room and bedchambers. He gritted his teeth.

“Lady Standish is in her study, sir.”

“You,” he said, nudging the sleeping man with the toe of his boot. He was not climbing over drunken bodies, not today, not any day. “Wake up.” The man opened his eyes with what seemed a great deal of effort. “Who are you? No, never mind, I can’t be bothered to care.” The man wasn’t any older than Julian himself, certainly not yet five and twenty, but Julian felt as old as time and as irritable as a school mistress compared to this specimen of self-indulgence. “Get up, restore that gown to its owner, and be gone before I decide to let your father know what you’ve been up to.” As so often happened when Julian ordered people about, this fellow complied.

Julian made his way to Eleanor’s study, and found her furiously scribbling at her writing table, a mass of wires and tubes arranged before her. She didn’t look up at the sound of the door opening, nor when he pointedly closed it behind him. Eleanor, once she was busy working, was utterly unreachable. She had been like this since they were children. He felt a rush of affection for her despite how much trouble she was causing him.

“Eleanor?” Nothing. He stooped to gather an empty wine bottle and a few abandoned goblets, letting them clink noisily together as he deposited them onto a table. Still no response. “Nora?” It almost physically hurt to say his childhood name for her when things felt so awkward and strained between them.

“It won’t work,” came a low drawl. “I’ve been sitting here these past two hours and I haven’t gotten a response.”

Banishing any evidence of surprise from his countenance, Julian turned to see Lord Courtenay himself sprawled in a low chair in a shadowy corner. There oughtn’t to have been any shadows in the middle of the day in a bright room, but trust Lord Courtenay to find one to lurk in.

Julian quickly schooled his face into some semblance of indifference. No, that was a reach; his face was simply not going to let him pretend indifference to Courtenay. He doubted whether anyone had ever shared space with Lord Courtenay without being very much aware of that fact. And it wasn’t only his preposterous good looks that made him so . . . noticeable. The man served as a sort of magnet for other people’s attention, and Julian hated himself for being one of those people. As far as he could tell, the man’s entire problem was that people paid a good deal too much attention to him. But one could hardly help it, not when he looked like that.

The Ruin of a Rake has permanently cemented Cat Sebastian as my go-to author to read and recommend in M/M historical romance.  She really makes it seem effortless (though I’m well aware that it probably isn’t) with her well-told stories and characters who display tremendous depth.  I thoroughly enjoyed this story, and it was primarily due to the wonderful characters.

We get to revisit with some characters from the author’s other books—something I always love to see.  But it’s Julian and Courtenay that make this story what it is, and if I find a way to pull Courtenay out of the book to keep for myself you can darn well be sure I’ll do it.  Julian seems to care a lot about what other people think, and wants to be seen as respectable and worthy.  Courtenay has always been a bit of a wild one, a historical equivalent of modern day’s ultimate playboy…but he’s grown tired of that as well.  They seem an unlikely pair, but that’s where the fun of the matchup really is.

Julian doesn’t want to want Courtenay, but the attraction between them blows that apart easily.  They’re both good for each other, quite complementary and they each even the other out from their more polarizing ways.

The writing is fantastic, and everything about this story flows so well and has just the right balance of character interaction and exposition while keeping the character’s growth and development moving along.  I’ve found that Ms. Sebastian’s books are very much character driven, and Julian and Courtenay shine as the focus points in this story.

The Ruin of a Rake was a 5-star read for me, and is one that I highly recommend, particularly if you are a fan of M/M historical romance.  You don’t need to have read the author’s other books to enjoy this one, though I personally do recommend it just to get the backstory of some of the characters that pop up from the other books in this one (trust me—you’ll love those books as well).  This story is meant for readers 18+ for adult language and sexual content (oh yes…have I not mentioned yet how hot that was?).  And don’t get any ideas…Courtenay is mine!  ;-) 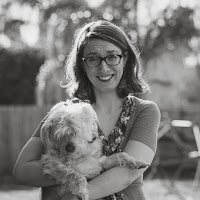 Cat Sebastian lives in a swampy part of the South with her husband, three kids, and two dogs. Before her kids were born, she practiced law and taught high school and college writing. When she isn't reading or writing, she's doing crossword puzzles, bird watching, and wondering where she put her coffee cup.