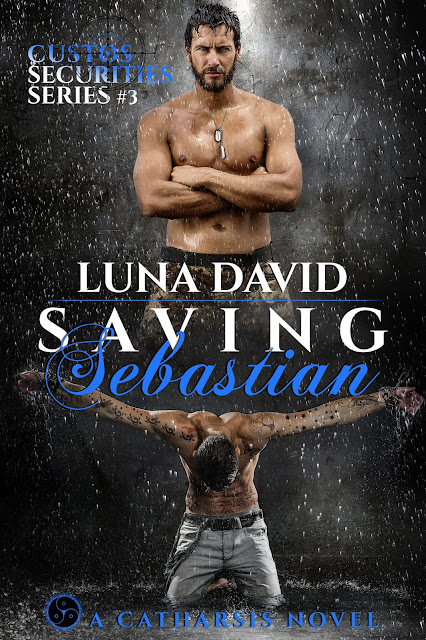 Temporarily sidelining his career as a tattoo artist, Sebastian Phillips works as a composite artist for the local police department. To alleviate the inescapable burden of a congenital medical condition, he immerses himself in his art and seeks the catharsis of submission. But with life weighing heavily on his shoulders and darkness encroaching, he yearns for a contract with a Dominant that sees past the protective barriers heís erected to the vulnerable submissive within.

When happenstance brings Gideon and Sebastian together, their connection is undeniable. The knowledge that they are both too damaged to form permanent bonds of love causes them to rely on an impersonal contract to fulfil their physical needs. But staying emotionally detached becomes impossible, and breaking their contract seems the only option. Will Gideonís need for vengeance and Sebastianís declining health destroy whatís grown between them, or will they help each other find their way back into the light? 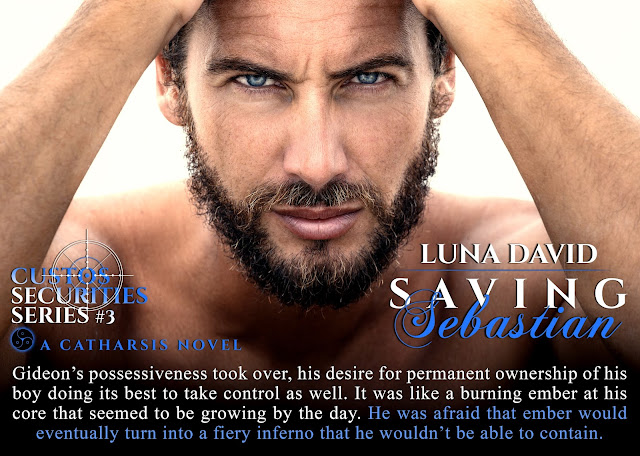 
He continued to give the kittens attention but kept his eyes on Sebastian. “You wearing a plug, boy?”

The blush pushed even more of his buttons and he smiled as his boy nodded and said, “Yes, Sir.”

Gideon, still squatting with the kittens, rested his elbows on his knees as he gazed up at his boy, grinning. “You look good enough to eat.”

Sebastian’s blush deepened and he turned his face away, avoiding eye contact. Gideon watched as an emotional wall came up, insulating his sub from any unwanted compliments he didn’t believe were genuine. He’d have to work on that.

“Speaking of eating. Have you had dinner?”

“Good. Come on into the kitchen, I’m gonna grab a beer and you can look through what I’ve got to see if you want anything.”

Sebastian followed him quietly and when Gideon pulled a beer from his fridge, he left it open for Sebastian to look through. He saw a spark of interest and then a sideways glance at Gideon before he shrugged and said, “I’ll just take water.”

That brought Sebastian’s focus directly on him. His eyebrows reaching toward his hairline. “Pardon?”

Gideon grinned at his boy’s proper response and used the neck of his beer bottle to point at the fridge. “You saw something that interested you in there. Go ahead.”

A blush crept up the boy’s neck to his cheeks and Gideon smiled wider, wondering what on earth could garner that much embarrassment from his refrigerator. He frowned when Sebastian insisted that water was what he wanted. That wouldn’t do at all.

Setting his beer down he lifted Sebastian up and sat him on the countertop, and watched as the boy wiggled to get his plug-ladened ass comfortable. He smiled and wedged himself between the boy’s legs. Watching his eyes dilate when he wrapped both of his legs around his waist like he’d done the night before sent a little thrill through Gideon. He loved how Sebastian responded to him.

He leaned in and trailed soft kisses up Sebastian’s neck, smiling when he felt his whole body shiver. Kissing his way to his ear he whispered, “What’s got you blushing in my fridge? Hmm?”

Before Sebastian could respond Gideon kissed his lips and pulled back. “We’re not gonna move from this spot until you tell me. I’m a very patient man, Sebastian.”

Gideon laughed. Guilty as charged. And reveled in the fact that Sebastian felt comfortable enough to shove him away playfully.

“You haven’t even told me what you want yet!”

Gideon snuck back in between the boy’s legs and tested a theory from a response he’d gotten the night before, digging his thumb lightly into Sebastian’s ribs. When the boy squeaked, and tried to shove him away again, he dug his fingers into Sebastian’s other side until he was squirming and trying desperately to get away from those tickling digits.

Gideon stopped his torture in complete surprise. A laugh escaping before he could stop it. “What?”

Sebastian’s mouth dropped open at his audacity. “See?! You laughed!”

Gideon gripped the edge of the counter, leaning into Sebastian, the top of his head resting on Sebastian’s shoulder, hiding his face as he kept laughing. “I’m not! Really. I’m not.”

Sebastian gasped and tried to shove him away. “You so are!”

He shook his head and cleared his throat, finding himself completely surprised, pleasantly so, that he was having so much fun. When was the last time he’d had fun like that? His expression serious, he gazed into Sebastian’s eyes, his own twinkling with mirth. “I’m not. I promise. This is serious. Chocolate milk is serious business. Hang on.”

He went about getting out a long ice cream spoon and the largest glass he could find. He filled it with milk and got the chocolate syrup out of the door of his fridge and proceeded to brandish it high above the milk glass, squeezing a ridiculous amount of chocolate into the glass with a flourish.

Setting the syrup down, he held up the spoon to be examined by Sebastian, who was now crossing his arms over his chest, eyes narrowed, doing his level best not to laugh. When he nodded, Gideon proceeded to take said spoon and stir in the chocolate, the milk changing color gradually until it was as dark as he could probably get it.

When Sebastian moved to pick it up, Gideon held up his finger and turned to a drawer. Back a second later, he was brandishing a plastic, bright blue, loopy straw with a penis as the tip and Sebastian lost the fight and finally let loose his laughter. When Gideon handed him the huge glass of chocolate milk he took it with greedy hands and started drinking from the penis with outrageously exaggerated enjoyment, making Gideon laugh again.

When he finally stopped drinking, the glass was half empty and Sebastian smacked his lips. “Ahh! Sooo good! Thank you, Sir.”

Completely charmed, and thoroughly enjoying himself, Gideon replied, “You’re welcome. I’ll keep it stocked for you.”

Sebastian tried his best to look stern. “See that you do.”

They grinned at each other a few more seconds and Gideon remembered the box of pastries his brother had given him earlier. He snagged them from the counter and opened them, watching as Sebastian’s eyes widened comically and he reached in the box, but then yanked his hand back out, looking up at Gideon. “May I, Sir?”

He smiled gently and nodded, loving hearing Sebastian call him Sir. “Please. That’s why I opened the box. Braden made them.”

They snacked on the sugary confections quietly for several minutes and Sebastian took another long drink from his glass and then looked at him seriously. “Um, Sir?”

Sebastian looked down at his drink and then back up again, grinning. “Don’t think I’m gonna let it slide that you have an electric blue, loopy penis straw in your kitchen.”

“I’m gonna go out on a limb and say, probably most people.” 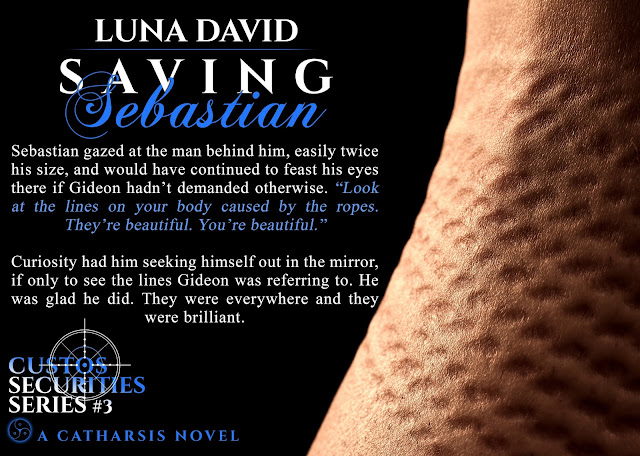 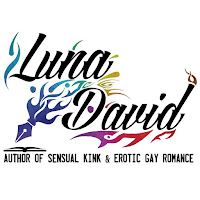 Working for the man by day, and playing caped crusader by night, she fell in love with a superhero whose alter-ego was a mild-mannered financial analyst. With the combined strength of their Evasion Superpowers, they're able to leap tall buildings in a single bound, and escape the horrifying drudgery of peopling and adulting as often as humanly possible.

Luna fiercely devotes herself to her amazing family and friends, drinks coffee like the life-giving ambrosia that it is, and reads gay romance novels voraciously. And while watching a movie and cuddling is still the perfect date night for her and her superhero hubby, her favorite moments are when he makes her laugh until she cries and can't help but fall in love with him over and over again.

Life for the superhero duo seemed perfect until the birth of twins threw their world into delightful and exhausting chaos, proving perfection always has room for improvement. Leaving big business behind, The Adorables became her full-time job. But eventually Luna realized it was the perfect time to follow her dreams, so she hung up her cape, donned her rainbow slippers and Wonder Woman pajamas, and dove into her fictional world. When not saving her little monsters from themselves or overseeing the Dungeon, Luna slays fictitious evildoers between the pages of her manuscripts.