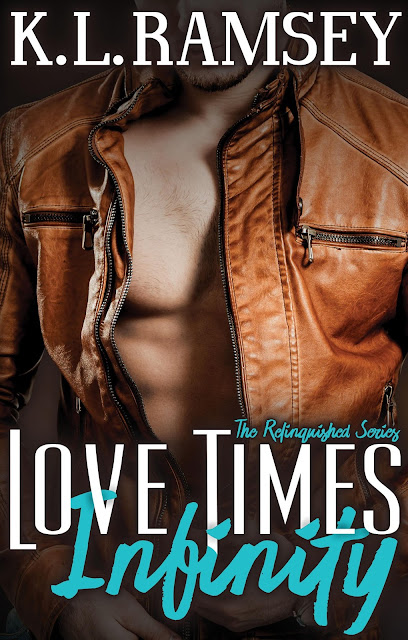 The last thing Karlie Angel wants to do is travel home to attend her younger sister’s wedding. As if catching her boyfriend in bed with her little sister wasn’t humiliating enough, now she must watch them say, “I do.” Karlie has given up on love, men and her own happily ever after. She just wants to get this nightmare wedding over with and head back out of town. But she didn’t count on Drew Jackson.

Drew had been in love with Karlie since senior year of high school, but she belonged to Jake Ashbrook then. Now, he sees Karlie’s return as his only chance to claim her. He just needs to convince Karlie to let him into her heart. Sometimes, actions speak louder than words, especially when Karlie’s past comes back to haunt her. Drew must find a way to keep her safe and convince her not to run again.

Love Times Infinity is the first book of The Relinquished Series.

“Sorry, it’s just not my day. I should have stayed home, like I planned. Now I’m here, on the side of the road with a flat tire and in the arms of a man I didn’t think even knew my damn name eight months ago.”

He tightened his hold around her middle. “Oh, honey, I knew your name,” he drawled. “You like to cuss more than any woman I’ve known.”

“Well, you don’t really know me, now do you, Drew?” She was done standing on the side of the road. Done being held by this man who smelled like heaven and was close enough to kiss. Her eyes fixed on his mouth and he seemed to notice. His body stiffened.

“You shouldn’t look at me like that,” he rasped.

“Like you want me to kiss you. Because right now, darlin’, I want to do just that.”

Then Drew’s lips were on hers, sealing over her mouth. His tongue slid across her closed lips, begging to enter. She gasped as he pulled her closer, grabbed her ass, and squeezed. That seemed to be what he wanted as his tongue entered her mouth. She licked him back and he moaned into her mouth. It was a good thing that he was holding her up because she couldn’t even feel her legs. He ended the kiss, leaving them both panting with the loss of air.

“Baby, I know your name. I know who you are, and I have wanted to do that since I first saw you, after I moved here in twelfth grade. You were the hottest girl in the senior class, and I knew I would never have a chance with you. I also knew that you were in love with Jake and that he’d have killed me if I ever even dared to touch you. I know you, Karlie Angel.”

Karlie felt a breath catch in her throat as she sighed. She snuggled into his arms and wiggled her butt, just enough to distract him. His hands were still on her ass and his fingers flexed. Good, she still had his attention.

“How would you like to be my date for my sister’s wedding?” She felt heat rise to her cheeks. Yeah, judging from Drew’s grin, she’d actually asked that.

Drew released her and took a step back. He was going to say no, she could see it in his face. His smile was meant to be polite. Okay, it was her fault for forgetting her new rule about swearing off the male population. She’d take his rejection and call someone to come pick her up. She was so close to her parents’ house, she could practically walk there with her suitcase and still make it to most of the rehearsal dinner in town.

K. L. Ramsey was born and raised in Maryland where her life changed when she signed up for a creative writing class. Knowing that someday she wanted to become a writer, K.L. received her BA in English from Salisbury State University.

Somewhere in her mid-forties, K.L. decided to write her first romance novel, proving that dreams can be realized at any age.