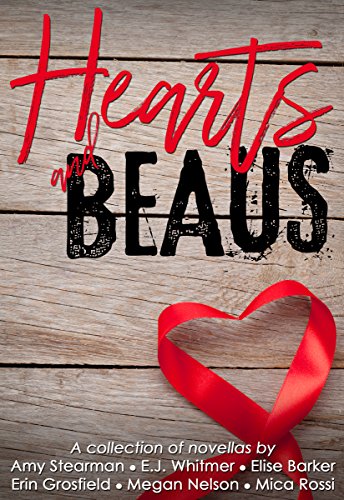 No two love stories are the same. In Hearts and Beaus, enjoy not one, not two, but six unique tales of finding, choosing, and appreciating love. With stories about love that heals, overcomes, endures, and surprises, this collection of contemporary romances from authors spanning several genres is a treasure trove for the hopeless romantic.

Following a terrible accident that left her widowed and with a mute son, Kate struggles to regain her sense of normalcy. Balancing the diner she runs in her small home town against the weight of her son’s needs, the last thing Kate needs is another complication.
Ben finds himself in the small town of Barton, Missouri running on fumes and his last few dollars. He has no choice but to find a way to make some money or face going back home, a prospect he’d rather avoid.
When something as simple as a misbehaving vehicle brings the two together, their spark is undeniable. However, neither of them could have prepared themselves for just how connected they truly are.

What's Luck Got To Do With It by E.J. Whitmer

If there’s the possibility of something going wrong, Riley Bremmel is sure to draw the short straw. Half of her life has been spent in a cast or Ace bandage. She’s dated losers and liars and never seems to land on her feet. Until she meets Graham, a handsome stranger who stumbles upon her changing a flat tire on a cold night. Maybe, just maybe, her luck is turning.
Graham Moore is the luckiest man in the Midwest. And, lucky him, he happens to be in the right place at the right time to rescue a damsel in distress. However, as time passes, his luck falters. The closer he gets to Riley, the more things turn against him. After learning of the Moore Family Curse, is it worth losing his luck to win his love?

The Extraordinary Ordinary by Elise Barker

Eva has it all: a good relationship with her husband Charlie, two goofy kids, a solid career, and a comfortable house. But a series of misunderstandings threaten to disrupt her happy normality. Shaken out of their routine and escaping to the woods in an ever-escalating comedy of errors, Eva and Charlie must work together in mutual trust to protect their family from forces outside their control. In the isolation of a rustic cabin, facing increasingly real dangers, Eva and Charlie rediscover the passion that had been missing from their snug yet mundane existence, and learn to appreciate The Extraordinary Ordinary.

Zoe is living her best life. After inheriting her grandparents’ farmhouse in her tiny hometown, she builds a thriving wedding venue in the old barn. Every day greets her with tranquility and laughs with her faithful, larger-than-life Great Dane. She has everything she needs.
Wyatt loves his penthouse life in the city, his world travels and his money. But with all his success, he has to admit he finds himself lonely and unfulfilled.
When a chance encounter brings their worlds together, will they be able to choose between the lives they know and their unexpected, inescapable longing to be together?

Something Beige by Megan Nelson

Paige is used to going unnoticed. When you’re a little plain and a lot introverted it comes with the territory. Trying to stay optimistic and true to herself, Paige looks for someone who values the natural over the fake, who understands there’s more to a person than meets the eye.
Losing yet another guy to a superficial beauty is the last straw. If all men prefer flash to substance, then she’s done with them. Fostering unwanted cats helps her feel needed and appreciated even if it doesn’t fill every corner of her heart. With all her focus on animal rescue, Paige is unaware that love is closer than she thinks.

If Only by Mica Rossi

Grant Richardson wasn’t looking for love, and certainly not in the silly castle on an island that shouldn’t exist. He was, after all, a lawyer. He didn’t believe in fairytales or pixie dust. Maggie Chalvis had dreamed of love but never expected it. She lived alone, with only her father and his secretary for company, confined to the castle created once upon a time for her enchanting mother.
Two solitary souls traveling in singular orbits. One grand master orchestrating their meeting. And just a little bit of Valentine magic.

Amy Stearman is an avid reader and writer of stories, hailing from the Midwest. She lives in the liberal mecca of Kansas with her husband, young son, and ornery Sheltie.
Amy holds her bachelors degrees in Human Services and Victim Studies, and a Masters degree in Social Work. That might sound pretty cool, but she accidentally ended up in marketing.
When she's not chasing her six year old or attempting DIY home improvement, she's jotting down story ideas and dreaming big.

E.J. Whitmer is a young-ish Iowa native who spends her days working in marketing and design. When she is not working or writing, she likes to spend her free time cooking, crafting, attending sporting events, harassing her outrageously good-looking husband or cuddling her toddler son.

Elise Barker received her PhD in English and the Teaching of English in 2014 from Idaho State University where she continues to work as a part time adjunct instructor. Today she is working on the curriculum for an intensive hands-on Harry Potter class for kids ages 11-17. Elise has written in a variety of genres, both academic and creative, but her heart currently lies with studying the art of memoir.
Elise and her husband Chris Elston have two kids and her favorite thing to do is play with them outside, whether it’s hiking, biking, snowshoeing, swimming, canoeing, or going to natural hot springs. If she gets to the end of the day and hasn’t done something Instagram-worthy, she rouses herself up and creates a memory.

Erin Grosfield is an author and perpetual dreamer currently holding down the fort in the Midwest with her musically inclined husband and two young children--one of which is well-behaved. She took her degree in journalism and became a creative entrepreneur, running her own magazine and later producing an original Emmy-nominated home renovation Web series. These days she's dreaming in novel form and seeing her characters in the grocery store, which she took as a sign to put ideas down on paper and become an author--because, perpetual dreamer.

It’s no exaggeration to say that Megan Nelson is always writing. By day, she puts her two English degrees to work as a technical writer, delivering logical and easy-to-read training materials on demand. At night, she puts logic to bed and lets her creative side out to play. She is especially fond of love stories, ghost stories, science fiction, or any combination thereof.
Megan lives in Kansas with her husband and two young sons. Completing the household is an exceedingly fluffy cat and a surprisingly hardy Betta fish.

Mica Rossi has been writing since she was in the second grade and barely able to form her letters properly. Her first book, Once in a Blue Moon, is a paranormal romance and was selected as a spearhead novel for Melange Books’ White Satin Romance line. Her second published work, Heart Songs, is a collection of short stories and poetry about the human heart and all its boundless emotions. Other works have been featured in several anthologies, and she’s furiously scribbling through various drafts of her second full-length novel, a contemporary romance set during the Christmas season.
Now working as a paralegal to pay the bills, Mica hopes to someday make writing her full-time career. Of her own stories, she says, “I love the juxtaposition of an urban setting against elements of magick or faerie, demons, ghosts or mythical creatures. There’s something that draws me to those pockets of our universe where the laws of physics can be ignored, or at least trifled with. If Only… is one of those stories.”