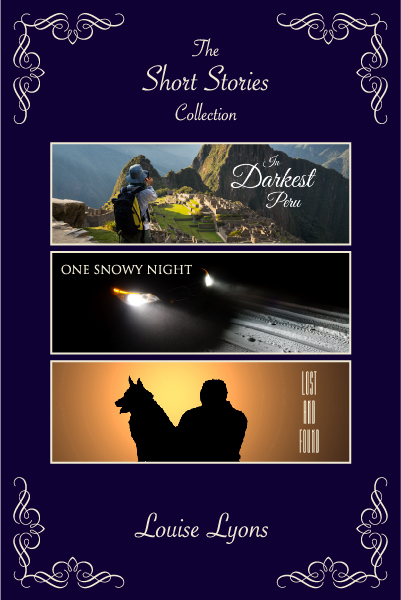 A collection of three short stories.

When shy and geeky Rhys White is ditched by his boyfriend of five years, and made redundant from his job in the space of one week, he decides to make some changes. Tired of being boring and hiding being his computer, he throws caution to the winds and buys a plane ticket to Peru.

The adventure in Peru starts out well, but then disaster strikes when the bus he is travelling on is held up by thieves. Rhys loses everything, including his passport, wallet, and phone.

Stranded in Cuzco, not too far from the famous Inca city of Machu Picchu, Rhys tries to find someone to help him. Just when he begins to lose hope, sexy Brazilian, Rafael, comes to his rescue, and his desperation situation takes a turn for the better.

After yet another failed date, Keith Brambles' luck turns from bad to worse, as he tries to drive home in heavy snow and crashes his car. With no phone signal, no warm clothes, and the weather worsening, he fears freezing to death overnight.

But help is at hand in the form of a knight in a white van. Mike Talbot stops to help Keith, and takes him home to warm up-in more ways than one, when the pair's mutual attraction kicks in.

Mike is everything Keith has ever dreamed of when he thinks of his ideal man. But can Mike really be Keith's dream come true, or is their night together just another bit of fun?

When author Philip Johnson loses his much-loved dog, Prince, he buries himself in the fantasy world of his latest novel. But as his heartbreak gradually lessens and he focuses more on the happy times he had with Prince, he realises the hole left in his life needs to be filled with a new puppy.

After responding to an advertisement for a young dog, Philip is surprised to find the owner is none other than Edward Manby, the very good-looking vet who took care of Prince in his last hours. Philip is delighted to discover his attraction to Edward is returned and despite the twenty-year age gap between them, their love for their pets brings them together and leads to romance.

I have to admit, this story did go a bit slowly for me at first while the author described in detail the events and activities Rhys goes through until he meets Rafael.  Once they meet though, things moved more quickly…and while I couldn’t fathom taking the chance that Rhys did by going along with Rafael when they’d only just met, that decision did help open up Rhys to a whole new world of possibilities.  Thanks to Paddington Bear (a reference you’ll understand once you read this), Rhys learns to take a chance in life, and in the end it pays off for him in ways he never could have expected.  4 stars for In Darkest Peru!

While the catalyst for Keith and Mike’s meet cute was a heck of a jolt for Keith—literally—it starts off a whirlwind meeting and quick-building chemistry between the two.  It’s one of those situations where everything between them just falls into place from the start, a story where the two leads are lucky enough to basically fall into each other’s arms and have it work right from the start.  You know, the kind of story that makes you *happy sigh* and if you’re single desperately hope that what happened for them can happy for you too.  A bit of modern-day fairy tale meeting that is just the right thing to give you hope and make you smile…while also making you blush at the same time.  5 stars for One Snowy Night!

I love dogs, so right off the bat this story hit me hard in the beginning when Phil loses Prince—like tears rolling down my face hard.  But the sweet development of the relationship between Phil and Edward that followed more than made up for it, weaving their romance with just the right touch of sweet and heat…and a bit of doggy goodness to help me smile again after the tears.  And the age gap between the two men felt truly inconsequential with the way the two of them fit so comfortably together as a couple.  5 stars for Lost and Found!

Overall, I really enjoyed this group of short stories.  They all have a common theme of starting over, and all three stories espouse the idea of hope for finding love again.  The collection as a whole gets 4.75 stars from me…and all three stories are meant for readers 18+ for adult language and sexual content.

Louise Lyons comes from a family of writers. Her mother has a number of poems published in poetry anthologies, her aunt wrote poems for the church, and her grandmother sparked her inspiration with tales of fantasy.

Louise first ventured into writing short stories at the grand old age of eight, mostly about little girls and ponies. She branched into romance in her teens, and MM romance a few years later, but none of her work saw the light of day until she discovered FanFiction in her late twenties. Posting stories based on some of her favourite movies, provoked a surprisingly positive response from readers. This gave Louise the confidence to submit some of her work to publishers, and made her take her writing "hobby" more seriously.

Louise lives in the UK, about an hour north of London, with a mad dog called Casper, and a collection of tropical fish and tarantulas. She works in the insurance industry by day, and spends every spare minute writing. She is a keen horse-rider, and loves to run long-distance. Some of her best writing inspiration comes to her, when her feet are pounding the open road. She often races home afterward, and grabs pen and paper to make notes.

Louise has always been a bit of a tomboy, and one of her other great loves is cars and motorcycles. Her car and bike are her pride and job, and she loves to exhibit the car at shows, and take off for long days out on the bike, with no one for company but herself.

Giveaway: Louise is giving away a signed paperback copy of her 2015 fantasy/vampire romance novel, The Eye of the Beholder, which is no longer available for sale. Please comment on any of the Release Blitz posts to enter. Available for worldwide shipping.