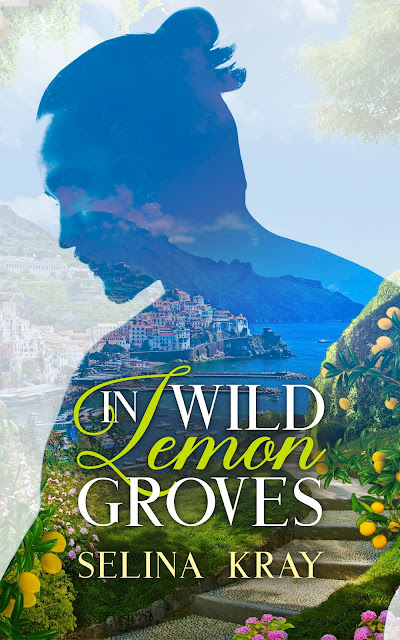 Can sun, sea, and eating your weight in pasta mend a tragedy-stricken heart? Will wine-soaked Amalfi nights and long walks through lemon groves work their magic on Seb's wounded soul? Or will he slink back into the shell of his grief once his grand Italian adventure is over? 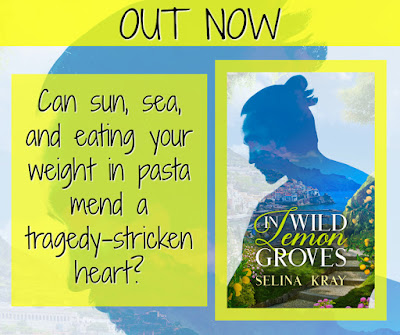 Scent of sea and palm,
Craggy and ancient, a world
Bathed in saffron
- #17, In Blue Solitudes, S. Wilson-Osaki

“A. S’okay.” Bleary eyed and bone weary, Sébastien stared at the sign for two minutes before it registered. He kept his distance, glanced around the bushel of sun-ripened cab drivers and chauffeurs waiting to squeeze every last euro out of their charges, but no.

This was him. Smile so bright it blinded, like glare off a windshield. Footballer’s frame decked in team colors and too-tight shorts. Face Bernini could have sculpted. Hair black as an oil slick, greased into a neat, perfect slope. His tortoiseshell eyes twinkled in Seb’s direction when he took a cautious step forward.

“You fly from Japan?”

Seb opened his mouth to correct him but nodded instead. “That’s me.”

“Andrea Sorrentino.” He thumped a hand on his chest. “You want I take your bag?”

Before he could decide, the driver clacked down the handle on his extra-fee-heavy suitcase and hefted it under his arm like an unruly toddler. “Vieni, vieni.” He dove into the crowd before Seb could get his bearings.

Spotting the clean line to the exit, Seb set his own pace, his tipsy head still mired in a post-flight fugue. Thirty-two sleepless hours, plus a morning spent tracing and retracing his path through the labyrinthine halls of the Rome airport to make his connection, left him listless. With exhaustion but also nerves. What had he been thinking, shipping off to a country he’d never been to and where he didn’t speak the language?

The answer, of course, was Henry. Who should have been there, propping him up with his rock climber’s arms, but also with his wonderment, the kid-in-a-candy store way he’d seen the world. Henry had puffed all his energy and excitement and fire into Seb’s lead balloon and—in his latest impossible feat—made him fly.

Clutching his backpack like a life preserver, Seb practiced his deep breathing as he waded through the stream of travellers. More of a trickle, really, now that he was in the flow. One foot in front of the other, he reminded himself, looking for a focal point. A taut jean-clad ass, with a carefree swagger all its own, lured him the rest of the way. Seb staggered out of the airport terminal…

… into a whole new world. The hazy afternoon sun swaddled him like a warm blanket. Ripe with the scent of palm trees and petrol, the parking lot was more social gathering than frantic hub, with drivers chatting, smoking, and laughing as they waited for clueless travellers to wander by. Stoic mountains—silent sentries at the gate to paradise—shadowed the horizon, rings of mist crowning their crater heads.

Woozy with relief, Seb lowered his lids to half-mast and basked in the moment. This was Henry’s world. He was safe.

A hulking black SUV screeched to a halt in front of him, blocking the view. Before Seb could decide whether to be terrified or outraged, his driver slid open the side door, beckoning him into his luxury air-conditioned chariot. Too polite to give in to the urge to collapse across the seats and zonk out, Seb stumbled into the nearest chair. His hands shook as he fought with the seat belt. Something about that fateful click brought the reality back home—he was trapped in a jet-fuelled coffin with a man who could barely pronounce his name, soon to be zipping down a highway where speed limits weren’t even guidelines, thousands of miles from home, by a world-famous volcano that once scorched everything for miles—

“Signor Osakay? You want I get you espresso? Water? Food? Is no trouble.”

“No.” Seb shut his eyes, sucked in all the air he could. “I… I’m just tired. Didn’t sleep on the plane.” When he opened them again, he met soft eyes shimmering with kindness. His exhalation came easy. So did his smile. What was his name again? Andrea Sorrentino. A gentle name, full of music.

“Granita al limone. Un momento.” A squeeze to Seb’s knee, and he hopped out the door.