“Do you hear my voice, sweet wolf? See the inferno in which I have brought upon you? You will obey me, do you understand? You will hunt me to the ends of the earth because that is what I desire. My wish is your command even if it may cost you your life. Now, obey me, Tannerian, or watch your world burn.”

The demon’s teeth latched onto Tanner’s neck again, biting into his purpled flesh. Amongst his agonising screams, the vampire drank from him like he was sucking the youth out from his body.

Sucking all of the good, the light, his innocence, and soul.

Tanner had never been bitten before. He hadn’t been turned into a werewolf like some humans were––he’d been born a supe. For a ludicrous moment, Tanner suspected the demon was trying to turn him into one of his own kind… Or something worse.

I’m not human, you blasted fool. You cannot turn me!

But words failed him.

He could say nothing—do nothing. 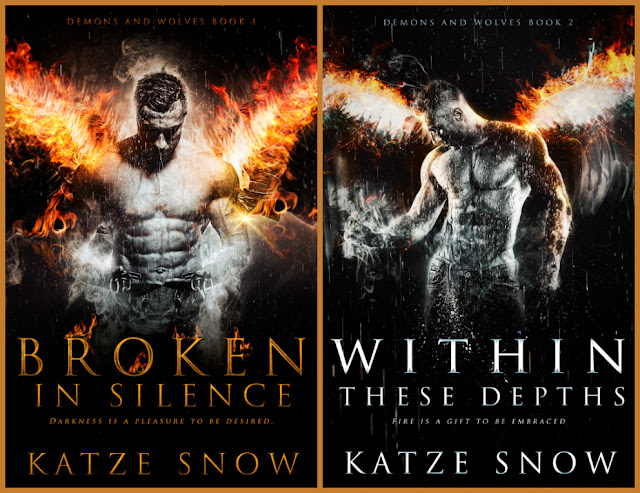 Book #2 -Within These Depths - books2read.com/WithinTheseDepths

Tannerian Wulfric is a leader-a strong alpha who bows to no-one, especially those who try to undermine his authority.

When an opportunity arises, he grabs it with both hands and lets nothing get in his way. Trouble is, his brother has been caught in the crossfire of glorious retribution, and Tanner is in need of assistance.

For many years, Alex Jonas has lived his life in peace. But when fate lands him in the hands of his ex-lover and alpha, he finds himself in the centre of a feud he never knew existed, and must immerse himself in ways he had never imagined. One chance encounter, one night, and everything comes crashing down around him. Alex must fight for his life while Tanner fights for one thing and one thing only-vengeance, which has never tasted sweeter.

Can Tanner avenge his family's death without spilling more blood? Or will his inner demon tear apart everything he has worked for, and lose the man who owns his heart?

Tanner is so close to his revenge that he can almost taste it. With an unusual brand of negotiation skills under his belt, he has everything he needs. Now all that stands between him and destroying Elijah Ravenhill is a dangerous mission into the depths of Hell. Accompanied by his guides, he will enter where loyalties and souls are tested, and few ever return.

Newly mated Alex just wants to keep his loved ones safe. In the sprawling grandeur of Wulfric Manor, he finally has his family under one roof, even if it may only be temporary, and his dreams of having something normal seem to be within reach. Yet what's normal for the wolf is torture for the prey, and chaos descends on Alex with one mysterious phone call.

Can Alex have all he ever dreamed of without sacrificing his life? Will Tanner put an end to Elijah once and for all, or will his revenge go up in smoke within the fires of hell itself?

Warning: Within These Depths is the highly anticipated sequel to Broken in Silence: Demons and Wolves Series, and things are really heating up. This story is NOT a typical romance and it's not intended for those who seek a HEA. It cannot be read as a standalone. 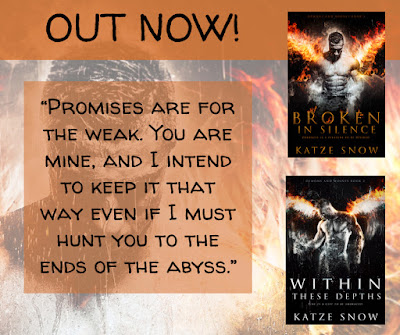 Katze Snow never learned when to shut up. Food and coffee are what encourage Katze to function in a semi-normal, sort of socially acceptable way. Doses of sarcasm and sass are what she lives for, and her wolf, Kiba, who is Katze's little furbaby. She's been writing since she was a child, but finally published her debut novel, Alpha's Bane, in Autumn 2016.

While Katze also writes MF, MM is where her heart truly lies. Her writing is dark, gritty, and takes satire to a whole new level. Come and join her! But be warned: Katze likes her men dark, twisted and all kinds of messed up, and she hopes you do too.

When Katze's not writing, she's working for a top secret, underground organisation, or taming wolves. (Check out her furbaby, Kiba!)

"Why ever would I want to go to heaven, when hell is so much more fun?" ~ Broken in Silence (Demons and Wolves #1)