New Release-Excerpt: WHAT HE CRAVES by E.M. Denning

WHAT HE CRAVES
Desires Book 2

Genre: M/M romance with a twist of kink 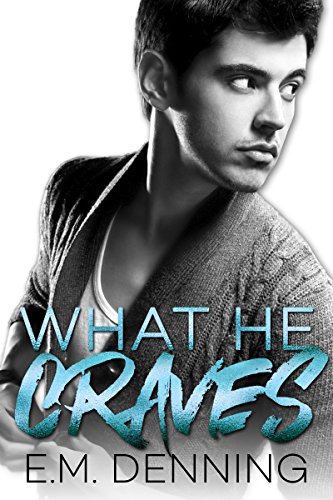 Matt Simpson is notorious for his bad decisions. From his rocky teenage years to his tumultuous early twenties, he's made a lot of mistakes. His latest, greatest, and perhaps stupidest of them all was his recent pursuit of his boss, the unattainable Steve Paulson. Desperate to make the man notice him, and knowing Steve would never get involved with an employee, Matt quits his job.

Unfortunately, Steve still won’t touch him. To make matters worse, his new job falls through and his older brother won’t hire him. Matt can’t bear to ask Steve for help, and soon he finds himself out of money and out of options. When Steve finds him living in his car and demands that he go home with him, Matt obeys, but living with the man he's wanted for two years proves to be frustrating as well as explosively hot. As Matt begins to explore his submissive side under Steve's firm guidance, his insecurities haunt him. What does a homeless, jobless kid with a string of failures behind him have to offer, even if Steve did want him for more than a brief fling?

“Stop.” Matt said. He pulled away from Steve, only a little so he could look at him, because he needed to see him. He needed to see the man that held so much of his heart. “You have nothing to be sorry for. You’ve done nothing to feel ashamed about. We both know I overthink things. We both know I’m too hard on myself. I’ve been trying to work on that, I have, because you make me believe that I’m worth something. I shouldn’t have lied to you last night when I said I was fine. I wasn’t fine then, and I wasn’t fine this morning. I keep expecting something to happen. I keep expecting all of this to end.”

Steve looked both crushed and horrified. “Why would you expect it to end?”

“Because I’ve never got to keep a single good thing in my life. When something good does come, I can’t believe it’s mine and I never expect to keep it because I don’t get to keep the good things. Only the bad. I get to keep the knowledge that I spent my teens f*cked up. I get to keep an absent mother and an asshole father and a brother who thinks I’m a whore.” Matt’s chest heaved. His eyes were white hot with tears he refused to shed.

Then Steve leaned in and kissed him with both eyes wide open. “And me. You get to keep me.”

When Craig walks into the first kink club he’s been in for months, the last thing he expects to see is his former Dom, Tim, wearing a collar. If learning his ex is a switch isn’t shocking enough, Craig quickly finds himself on the wrong side of his ex's Dom. When the reunion turns ugly, another Dom swoops in and saves the day, and Craig is too shaken to argue when the sweet Dom steps in and takes care of him.

Alan noticed the boy the minute he walked into his club. It was hard not to. He was beautiful, sad, and fully clothed. Once the boy is in Alan’s arms he knows he doesn’t want to let him go, maybe ever. He worries that even though his hardcore Dom days are behind him, his experience will scare Craig and he’ll lose the chance to have something real with him.

Their relationship quickly heats up, but Craig can’t stop wondering if an inexperienced sub will be enough for a seasoned Dom in the long run.

E. M. Denning is a writer from British Columbia. She loves her family and her animals and anything cute and fuzzy. She was born a hopeless romantic and when she’s not writing romance, she’s probably reading it. She loves love.