New Release-Excerpt & Giveaway: LEANING INTO A WISH by Lane Hayes 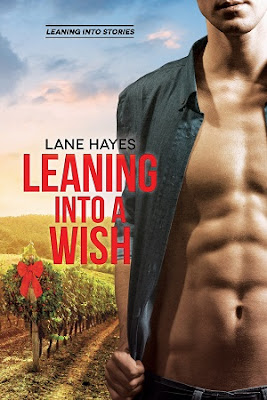 Ryan Haskell loves everything about the wine business. He's fortunate to work at one of the most prestigious wineries in Napa Valley doing something he enjoys with the people who are like family to him. But he could do without the good-natured intern slash former jock with the wicked grin who always seems to be in the way. Ryan isn’t sure why the new guy is under his skin when everyone else loves him. Thankfully he'll be gone after the holidays.

Danny Meyers can’t believe his luck when he lands an internship at Conrad Winery. It’s the perfect temporary gig to wrap up his graduate studies. He's left his dreams of tennis stardom on the court to focus on a new career and a new life. However, he didn't count on the spark of attraction he feels for his prickly co-worker. When their tentative friendship blossoms into something more than either man counted on, they may have to change direction and lean into a holiday wish.

A vacuum-like static rang in my ears. It wasn’t until Danny nudged my arm that the typical raucous bar noises filtered through again. And when he scooted his barstool back a foot or two and raised his hand to flag down a server, everything seemed to return to normal. Sort of.

“Gin and tonic for my friend and I’ll have another martini, please. Thanks.” Danny tipped back the last of his drink then handed it over before twisting to face me. “So other than being out twenty-five bucks and possibly having an awkward conversation at work on Monday, that didn’t go so bad.”

“We agreed to let Geordie win the bet, remember?”

“Sure, but how did I get stuck here with you?”

Danny snorted. “We’ve already established that you like me. Stop being an uptight fuddy-duddy.”

“A fuddy—? You’re…” I gritted my teeth and tried to think of a stinging insult to fit the situation. “Annoying.”

Lame. And the “That’s the best you’ve got?” twinkle in Danny’s eye told me he agreed with me. I was about to let him have it when the waiter stopped to deliver our drinks. When we were alone again, I leaned into him and kicked his shin for good measure.

“Ow. Relax, Ry. I still want to kiss you, you know.” He popped the speared olive from his martini into his mouth. “With tongue.”

“You’re reading way too much into a stick of spearmint gum, honey. Don’t flatter yourself. It was a joke,” I huffed derisively.

“Are you f*cking nuts? I’m not kissing you,” I announced primly.

“You want to though. Admit it,” he teased.

I blew out an exaggerated breath, sucked down half my cocktail, and slid off my barstool. “I’m outta here. See you Monday.”

Danny grabbed my belt loop and yanked me to his side. “You didn’t let me finish. I was about to say…”

“Yes?” I prompted with a rolling hand gesture.

We stared at each other for a heated moment. I had no clue what he was thinking, but it seemed weird to ask for clarification. When the growing tension went on a beat too long, I wanted out. “See ya, Danny boy.”

I pushed my way through the crowd and gulped for air when I finally reached the sidewalk. I didn’t dare stop to enjoy the refreshing autumn breeze. If I wanted to avoid any further confrontation, I had to boogie. Danny was the type of guy who liked having the last word, and that wasn’t happening on my watch. I fished my keys from my pocket and power-walked toward the parking lot behind the bar.

I ignored him and picked up my pace. I spotted my car and clicked my fob to unlock the door. Danny called my name again. I could tell from the sound of his footsteps behind me that he was closing in quickly. I had to hurry or—

Too late. A hand on my elbow yanked me sideways.

“What the f*ck is your problem?” I fumed, pushing his chest to no avail.

He moved into my space until his nose was less than an inch from mine. He was too big and imposing, and the look in his eyes was straight-up dangerous.

My d*ck twitched in my jeans. Of course it did. I had a bad habit of coveting what I couldn’t have and getting turned on by the chase. My past was littered with embarrassing short-term affairs or crushes on guys like Wes and Finn. Men I admired but never had a real shot with. I didn’t want to add Danny to that list because against my better judgment…I liked him. Really liked him.

I’ve loved everything about this series so far, and Leaning Into A Wish takes what I love about these books—well-developed characters, a great setting, and excellent storytelling—and puts it into a holiday setting to give these guys just a touch of holiday magic.  No, not the paranormal kind, just the “it’s the holidays so here’s some holiday magic” kind that warms your heart.

I liked Ryan’s seriousness, and how he really cared about Geordie and put him first instead of dwelling on his own single status (when oh when will we get a Geordie story???).  Danny is like the wacky guy who always livens things up wherever he is, which ruffles Ryan’s feathers a bit while at the same time stirring his attraction.  The interactions between the two result in some great banter, and eventually some pretty hot scenes…and these guys really can’t stay away from one another once they get going.

It’s not just physical—Ryan and Danny form a solid bond of friendship as well, but there’s always the fact looming over them that Danny’s an intern and will eventually be moving on from the winery.  And then there’s his parents coming in to the mix, stirring things up by trying to push their own wants for Danny without giving what he wants any consideration.  That actually brings up the one point that I was wishing this story would have had—Danny’s point of view—so that we could have seen how he handled his parents when he went home for the holiday.  The whole story is told from Ryan’s point of view, which was fine for the me for the most part, I just would have liked to experience how Danny dealt with his parents while he was gone…and yes, okay, I love getting a peek into both main characters’ heads to see what they think and feel.

Leaning Into A Wish is a mostly lighthearted, sweet holiday romance with a nice bit of spice (these guys could wind up getting pretty naughty if you don’t watch out!), and was a 4.5-star read for me.  Though this is part of the Leaning Into series, it could feasibly be read as a standalone, but I think readers will enjoy this even more if they’ve read the other books in the series first—or at least Leaning Into The Fall since there’s the shared setting of the winery and shared characters as well.  This story is meant for readers 18+ for adult language and sexual content.


Lane Hayes is grateful to finally be doing what she loves best. Writing full-time! It’s no secret Lane loves a good romance novel. An avid reader from an early age, she has always been drawn to well-told love story with beautifully written characters. These days she prefers the leading roles to both be men. Lane discovered the M/M genre a few years ago and was instantly hooked. Her debut novel was a 2013 Rainbow Award finalist and subsequent books have received Honorable Mentions, and were winners in the 2016 Rainbow Awards. She loves red wine, chocolate and travel (in no particular order). Lane lives in Southern California with her amazing husband in a newly empty nest.