New Release-Review & Giveaway: YOURS FOR THE HOLIDAY by DJ Jamison-Includes Excerpt! 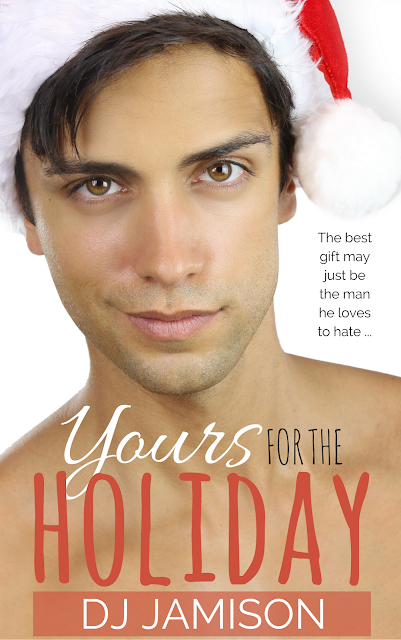 Fresh off a break-up, Remy is in no mood to share a room with his brother's best friend during a holiday stay at home. Jason Hendricks has always treated him like a little brother to tease and taunt, all the more embarrassing because Remy has secretly crushed on the jerk since puberty. But when Jason confides he's bisexual, Remy realizes the crush he loves to hate could be the perfect rebound.

Jason has always found Remy appealing. He didn't handle his attraction well when he was younger, but now Remy's a grown man and Jason's no longer afraid of his feelings. Some playful flirtation sounds like a great way to spend Thanksgiving break, but he's not prepared for Remy's newfound sex appeal or his decision to make Jason his rebound fling. Jason doesn't want to risk fallout with a family that's always been there for him, but he's not sure he can resist.

When the two part ways, they don't plan to stay in touch, but soon they're texting, trading sexy pictures and helping each other cope with family drama. Remy agrees to be his for the holiday, continuing their secret fling over Christmas, but Jason knows that won't be enough. He'll have to find the courage to be open and honest with his best friend -- and the whole Wells family -- if he wants a chance at love in the new year.

This approximately 50,000 word novel is a brother's best friend, enemies to lovers romance that comes with a satisfying HEA!

“Hey,” Jason said quietly. The bed dipped as he sat down on the edge of the mattress. “You okay?”

“Oh, so you’re done avoiding me?” Remy said, hating the bitter edge to his words. He swallowed hard, trying to gain control over his emotions, so he didn’t make a fool of himself yet again.

Swallowing hard, Remy forced out words that had been nagging at him all day. “I’m sorry too. I got carried away. I didn’t mean to pressure you—”

Jason’s hand hovered in the air. Remy watched Jason hesitate before resting his big palm over Remy’s thigh. The blankets formed a barrier between them, but the point of contact burned as if he could feel the warmth spilling from Jason’s hand.

“I, uh, find you very sexy,” Jason said, voice tinged with embarrassment. It would be charming if it weren’t for the heavy topic of conversation. “But I need the Wells family. I don’t talk about my parents much, but—”

“I know it’s not great,” Remy said. “Dad filled me in on what happened last summer with your mom.”

“Yeah,” Jason said. “So, basically, I’m terrified of f*cking everything up. If I go there with you, I might hurt you. And if your parents or Derek find out, I’m not sure what they’d do. It’s just … messy.”

“It doesn’t have to be,” Remy said. “It’s just some fun. No strings needed. And as for going there with me, don’t you think the cat’s already out of the bag? You’ve had your hand on my d*ck.”

Jason glanced at Remy’s crotch, unable to resist teasing him. “Cat’s out of the bag? And here I thought pussy only referred to—”

Remy slapped his hand over Jason’s mouth. “Don’t say it!”

Jason chuckled, his warm breath gusting over Remy’s palm. Remy shivered as their eyes locked and held. When the wet tip of Jason’s tongue licked a stripe over his hand, he couldn’t hold back a small moan.

“I’m not saying no,” Jason said roughly. “I probably should, but I can’t say no to you again. Not one more f*cking time.” 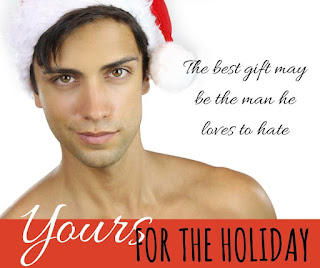 I love the brother’s best friend trope.  It already has its own built-in expectation of angst and pining, that unrequited crush that plays out over the years…which means the payoff at the end—that happy ending—is even more meaningful.  Now drop that into the holiday setting and you can guarantee that I’m going to read.  Yours for the Holiday while at times frustrating, actually met all of my expectations for this type of story, and I simply adored Remy!

The frustration thing?  I’m placing the blame for that evenly on both Remy and Jason’s shoulders.  It drives me nuts when the whole “what will the family think?” aspect comes into play since I just want to say “follow your heart”…that’s Jason’s excuse.  Then Remy trying to protect his own heart by insisting on them only being a holiday fling when it’s oh-so-obvious what his feelings are…that’s squarely on Remy.  So I’m holding both guys responsible for my frustration.  Because when they two are together?  Scalding chemistry abounds physically, but there’s also an emotional connection—they just work as a couple.

Yours for the Holiday is an entertaining holiday romance, and even with my frustration I already know I’ll be adding it to my yearly holiday reads.  4 solid stars from me on this one…and with the heat these two put out, this is definitely just for readers 18+.