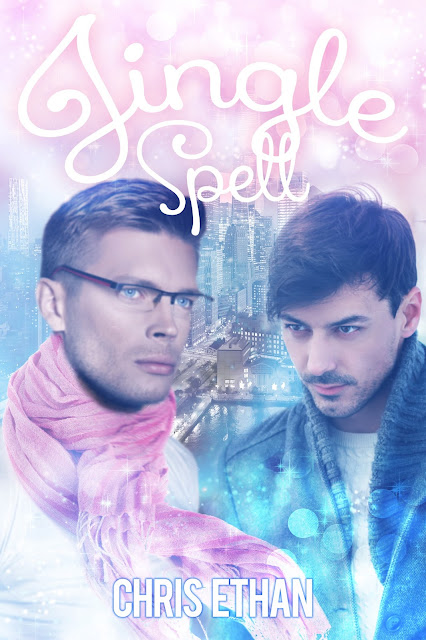 It's the most horrible time of the year.

Newly single, Davey has had enough of wasting his love and having his heart broken. Better to be single, he decides. No more dates. No more falling in love. No more dreaming of happy ever afters.

Those are for movies.

And then Avery steps into his life, bringing care, compassion, and tenderness in his path.

Davey's so tempted to hope again. But can an online date and a brief encounter turn into anything other than an ephemeral sexual encounter?

Is there a future for them? Will Avery stay? And most importantly, can Davey bear to offer up his heart to the season's love-just one more time?

A sweet romance by Chris Ethan, author of The Guy With The Suitcase. 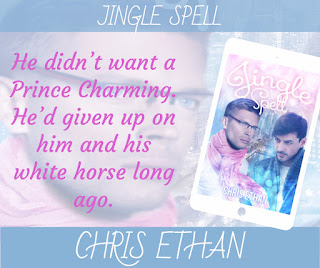 Jingle Spell is a relatively quick holiday read that is a bit insta-lovey, with angst brought on by the characters’ own insecurities.  There is some character growth for Davey, who seems to go from his highly cynical outlook on life and people towards a more balanced attitude the more time he spends with Avery…though Davey does appear to have low self esteem even near the end of the story—at least when it comes to relationships.

While when Davey and Avery first started seeing each other I felt that spark of new interest between them, as the story went on I didn’t feel their connection as closely, and Avery actually seemed to become a tiny bit jealous when they’d be out together.  When some conflict is introduced in the form of Avery’s ex coming back to see him, it also sends Davey backward a bit in terms of his attitude and self esteem again.

The story doesn’t really have any major drama, just the angst that is really self-created by Davey and Avery, springing from their own self doubts.  One thing that did irritate me about this book is that it is set in New York City, however there are quite a few British-isms to be found throughout the story.  There is also the matter of how a bar manager and a cashier in a retail store (not high paying jobs, especially a cashier) can each live in their own apartments without roommates and still have money to spend eating out and shopping seemingly without worrying about costs in New York.

Those concerns aside, Jingle Spell was a 3-star read for me and while there’s not a lot of on-page sex scenes, this story is still meant for readers 18+ for adult language and some sexual content.

Chris Ethan is a book whore. He enjoys selling his feelings for money and other pleasures and is blatantly unashamed to do so for as long as he breathes. Chris Ethan is also a persona for Rhys Ethan, author of fantasy and sci-fi. He uses Chris Ethan to share stories of adult queer romance with those who need it. Before you delve into his books however, be warned. He likes putting his characters through sh*tstorms and hates anything conventional. But then there's that darned happy-ever-after. Also, he likes swearing. Deal with it!