Pre-Release Review: BACK WHERE HE BELONGS by Isobel Starling 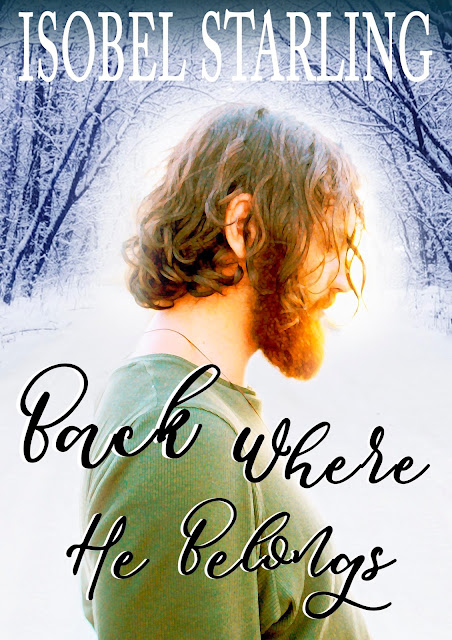 Back in Scotland after five years working in Australia, Kier Campbell finds himself stranded on a road in the Scottish Highlands on Christmas Eve. He needs to get to the next village urgently or freeze to death in his broken down hire car. Kier hikes down the icy road and as he walks memories of the life he'd run from-and the love he'd abandoned in Scotland return to haunt him.

With a blizzard fast approaching, a passing motorist finds Kier and offers him a lift. He is surprised to recognize the driver. As the weather worsens he realizes they is no way he will reach his parent's farm, and so is stranded with his savior for the holidays.

Kier's one Christmas wish is to make up for the mistakes he made all those years ago, but, curiously, he finds he has an unexpected rival for his lover's affections... 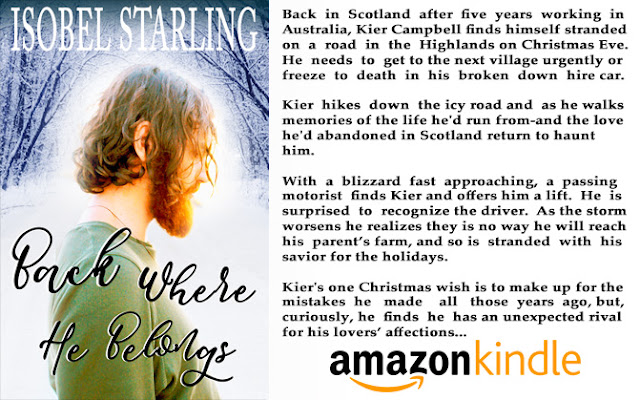 Back Where He Belongs is a sweet second chance romance with a hefty splash of interesting kink.  It’s a pretty quick read, but I still felt like I got a full story (even if I still wanted more—which always happens for me with shorter reads, I’m greedy like that)…and my only wish is that there could have been maybe a short epilogue to see where things were down the road.

Kier and Douglas had been friends, and later more, for a very long time, but Kier’s unwillingness to come out to his family cut things off between them.  Once upon a time, they were everything to each other…with that bit of kink (the puppy play mentioned in the blurb) to spice things up between them.  Now five years after Kier set off into the world, they meet up again by chance and things spark again.

There are some funny points when Kier misunderstands Douglas’s living arrangements, along with some interesting parallels between the actual arrangements and what comes later in the story.  I’ll admit, puppy play is a new one for me, but it actually wasn’t too far out there and wasn’t the focus of the story—the focus was the two men reconnecting, albeit a bit differently this second time around.

Back Where He Belongs gets a solid 4 stars from me, and an extra wink for the separate, unrelated bonus story at the end.  I’d recommend this to M/M second chance romance fans who don’t mind an extra bit of not-the-usual-kink in their stories—don’t be afraid to try it out.  This one’s definitely for readers 18+ for adult language and sexual content.

Isobel Starling spent most of her twenty-year professional career making art in Ireland.  She relocated to the UK and, faced with the dreaded artist’s creative block, Isobel started to write and found she loved writing more than making art.

Isobel is currently working on her sixteenth book.  The Shatterproof Bond series is an Amazon Gay Romance bestseller and isbeing translated into French with Juno Publications, German with Deadsoft Verlag, and Italian with Quixote Edizioni.  The series is also available as audiobooks, narrated by Gary Furlong.

“Fall Together” and “Sweet Thing” will be translated into French by Reines- Beaux Publishing.

Already in audio, narrated by Gomez Pugh, “Silken” will be available in German, Italian and French in 2018.