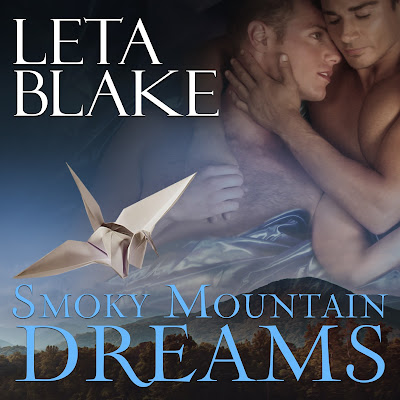 After giving up on his career as a country singer in Nashville, Christopher Ryder is happy enough performing at the Smoky Mountain Dreams theme park in Tennessee. But while his beloved Gran loves him the way he is, Christopher feels painfully invisible to everyone else. Even when he's center stage he aches for someone to see the real him.

Bisexual Jesse Birch has no room in his life for dating. Raising two kids and fighting with family after a tragic accident took his children's mother, he doesn't want more than an occasional hook-up. He sure as hell doesn't want to fall hard for his favorite local singer, but when Christopher walks into his jewelry studio, Jesse hears a new song in his heart.

This story is one that will take you through an emotional wringer a time or two, and it will probably touch on some hot buttons for most readers.  For me the biggest hot button was the amount of religious nonsense coming from both Christopher and Jesse’s families (much more so from Christopher’s), situations like this drive me nuts and I just want to give those zealots a massive chunk of my mind.  Another tension spot I think readers may pick up on is how some of the portrayal of Jesse being bisexual comes off as a bit stereotypical, at least where the breakdown in his and Marcy’s relationship is concerned (sorry, not saying more as it would become too spoiler-y).

The chemistry between Christopher and Jesse develops easily and goes from oh-yeah-that’s-hot to they-just-redefined-the-word-scorching pretty quickly.  That’s one thing this story does not lack—incredibly naughty sex scenes that will have you absolutely melting on the spot.  I do feel the need to mention that there was actually one of those scenes that I actually did not care for due to the direction in which the dirty talk went since to me it kind of bordered on self-degradation…but other than that, you’ll find copious amounts of the down-and-dirty.

The connection that forms between the two men goes far beyond the physical, and they have more than their fair share of angst, tension, and unique family issues to play havoc with their developing relationship.  While by the end of the story things have gone in the right direction, there are still points that are not quite resolved that made me feel like the story wasn’t quite done.  The story feels long, longer than it should for the tale being told.  The conflict between Jesse and his sister-in-law as well as between Christopher and his mother and stepfather was irritating and made me come to despise those characters (part of the intent of the conflict I’m sure), and I sometimes felt the whole religious righteousness aspect was a bit much.

While neither Christopher nor Jesse are perfect (Jesse irked me once in particular after Christopher sees Marcy by completely overreacting to where I wanted to slap some sense into him), they are perfect together…it’s just working their way around their families and the situation with Marcy that causes the strife and overwhelming angst throughout the story.

Overall, Smoky Mountain Dreams was a 3.5-star read for me, and honestly if the story could be trimmed down so it didn’t feel so overly long I’d probably jump that up a whole star.  This story is strictly for readers 18+ for adult language and explicit sexual content with some of it delving into some lighter kink.

The narration: John Solo did an absolutely fantastic job narrating this story.  He gave all of the characters distinct, individual voices and was able to clearly convey the high emotional content of every scene even as they became quite intense.  The pacing felt just right, and I was drawn right in to the story.  5 stars for the narration!

Author of the bestselling book Smoky Mountain Dreams and the fan favorite Training Season, Leta Blake's educational and professional background is in psychology and finance, respectively. However, her passion has always been for writing. She enjoys crafting romance stories and exploring the psyches of made up people. At home in the Southern U.S., Leta works hard at achieving balance between her day job, her writing, and her family.