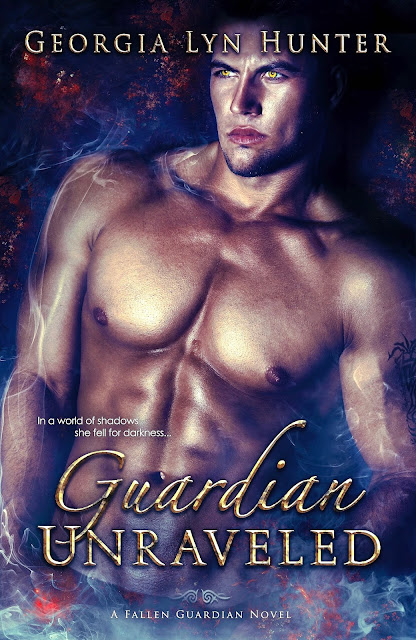 From the scorching pits of Tartarus, a warrior emerges with a deadly need for more than vengeance…

A loner, Dagan, lives with an inexorable thirst he’s kept hidden for eons, even from his fellow Guardians. Until he meets a beautiful, maddening human who awakens in him a hunger that shakes him to his very core, and threatens to shatter his tightly erected shields, exposing his dangerous secret. And wanting her is a path leading to destruction.

Driven to find her missing mother in a shadowy world, Shae Ion refuses to be sidetracked. When she becomes the target for a sinister force, a sinfully sexy and utterly impossible immortal abducts her, and he’ll stop at nothing to keep her safe.

Stuck in an isolated place with the reclusive Guardian who allows no one close, Shae struggles to control her new burgeoning powers, and is unprepared for the tangled emotions he stirs in her. But passion has a way of obliterating barriers.

However, the road to happiness is strewn with treachery. When an old enemy strikes, and comes after Shae, they are drawn into a terrifying, supernatural battle. And not even Dagan, a lethal, immortal warrior who’d lay down his life for her, can save her now…

Shae inhaled deeply, counted to ten, and prayed a madman hadn’t abducted her.

He remained hunkered down in front of her, eyes cool, his powerful forearms braced on his muscular, leather-clad thighs. Small scars marred his tanned fingers he kept loosely clasped in front of him. He wore a wide, corded leather band on one thick wrist and several narrow ones on his other. His black t-shirt stretched across his broad shoulders like a second skin, the short sleeves revealing bulging biceps. On his left one, he sported a sword-like tattoo made up of a myriad of intricate designs. It was unusual, like nothing she’d ever seen.

With those clothes and his long, ropey hair, he dressed like an extra from a movie shoot or something.

“You can’t keep me here,” she tried to reason with him. “You have to let me go. My uncle will be frantic and calling the cops by now.”

“Not until you answer my questions. Those dead men?”

She scowled, all thoughts of being calm and rational flying out the window. He’d accosted her outside the club, kidnapped her, and now he expected her to answer his damn questions? “Just what the hell are you talking about? What dead men?”

Sure, he was infuriatingly good-looking, but then so was Ted Bundy.

At the thought of the serial killer who’d charmed and murdered several college girls, Shae sprang to her feet and bulleted for the door. He grabbed her around the waist. Crap, she’d forgotten how fast he could move.

“Lemme go!” She hit him, but he merely swept her into his arms like she was some delicate freakin’ daisy and carried her back. Furious, she bit him. Hard. And hoped her teeth did some real damage to his biceps.

An annoyed grunt escaped him. “Stop that, you little hellcat.”

Like a bag of unwanted grain, he dropped her on her butt, back on the mat again.

Pain jarred up her spine, and she clenched her teeth. But the three angry, red streaks scored on his powerful forearm had her blinking.

She’d done that? Shocked to her core at her dreadful behavior, Shae opened her mouth to apologize but when she met those burning yellow eyes that had taken on hints of orange, a spurt of anger cut through her guilt. “This is kidnapping. I’m gonna have your barbaric ass thrown in jail!”

“Try. When you’re ready to talk, scream. Maybe I’ll hear you, maybe I won’t.” His eyes like flint, he stalked out, shutting the door quietly behind him, only to stride back inside. He crossed to the far end of the room, grabbed all the swords from the stand there, and walked out again. Leaving behind a small fridge. Right then, she wanted to fling the appliance at his arrogant head. Except he looked like he could break her neck with just one hand.

She had to get out of here before he came back. 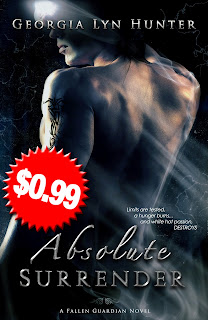 Born in the flames of Heaven’s wrath, he’s all things sinful and too dangerous to love.

An immortal Guardian of the human race, Aethan has walked alone for millennia, trapped in a hell of his own. Until a feisty mortal crosses his path. A female he shouldn’t even look at, one who shakes the precarious foundations of all that he is, and one who’s determined to walk the edge of danger.

All her life, Echo Carter wanted “normal”, an impossible feat given that she can see demons. Drawn back to the alleys of New York, she’s determined to hunt down the one responsible for the death of her friend. And no man, no matter how sexy, will stop her. Until she discovers a horrifying truth about herself, forcing her to turn to the one man she should avoid. Aethan.

But when two stubborn wills collide, a dangerous passion ignites…

As evil closes in, Aethan has to overcome his darkest fears and claim Echo as his. If he doesn't, he just could lose her to a far more sinister fate…

*This is a re-edited version with an added epilogue. 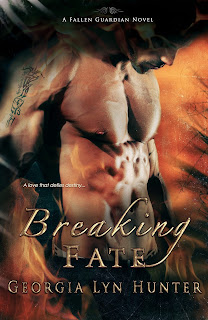 An immortal without a soul is bad enough. But when his only tether to remaining honorable is his addiction to bone-crushing pain, it makes Blaéz a dangerously loose cannon.

A Guardian sworn to protect mortals from supernatural evil, Blaéz straddles the edge of darkness as his needs grow. When a good deed brings him to the doorstep of a female unlike any other, one whose touch ignites emotions long lost in the hellish pits of Tartarus, he’s determined not to lose her. She belongs to him. But she’s human. Forbidden. And bringing her into his life may just destroy them both.

Darci Callahan has given up on love. But when a lethally handsome stranger suddenly appears late one night, she finds herself inexplicably drawn to the captivating man with the pale, empty eyes—a man who awakens in her a desire she never believed possible. Except Blaéz brings more than unexpected passion to her life, he brings danger.

In this treacherous new world of gods and demons, Darci soon discovers a heart-shattering truth and the twisted games the gods play. Caught in the crosshairs, she’s forced to accept that, sometimes, no matter how much you love someone, you have to love them enough to let them go…

I’ve been creating stories from the moment I could string two words together. No matter the tale, it always has romance woven through them. Yes, I'm a hopeless romantic.

When I’m not writing or plotting new books, I like to read, travel, painting, or troll flea markets where I usually buy things I might never actually use because they're so pretty.

After working in a few jobs all art related, a chosen career as a fashion designer, then an art teacher, I finally found my passion four years ago: writing. There really is no other job I’d rather do.

Oh, and I live in the beautiful country of South Africa.