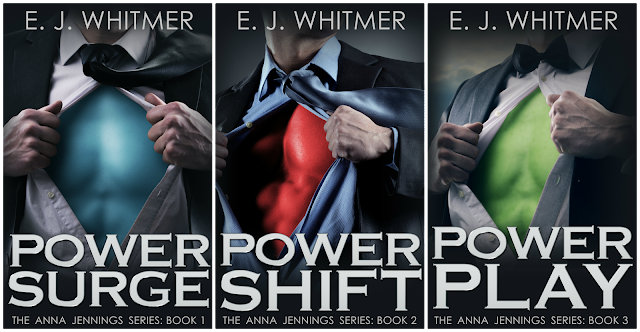 Anna Jennings is no superhero. In fact, had you asked her about superheroes a week ago, she would have called you crazy. She believes in routine, working hard and playing harder. But that all changed one night when she and her wayward sidekick Carl discovered several of her co-workers engaged in some decidedly non-run-of-the-mill human activities. Now her life is in a whirlwind as she finds herself caught up in the superhero world of her super-sexy boss and her long time crush as they battle the evil Captain Zinger (yes, really). Will Anna find a way to save her superheroes (even with the disastrous help of the spandex-loving Carl), her sanity, her new found love, and - oh yeah - the world? Find out in Power Surge - Book 1 in the Anna Jennings Super Novel Series!

Clark Kent was a fox. Seriously. The man could go from the nerdy-chic look of a newspaper reporter to liberty blue, spandex tights and still send hearts a-flutter. Granted, saving the world and being an all-around good guy didn’t hurt his image. But seriously. The man was a fox. And really, ignoring the Michael Keaton years, Bruce Wayne was pretty foxy himself. It’s no wonder when people think of superheroes, they automatically picture tall, dark, dramatically handsome men, flying around the city, rescuing beautiful women from their eminent demises.

I’ve spent my whole life envisioning said heroes. Growing up with four older brothers meant my world practically revolved around super heroes and villains. It also meant that at any time, I had four courageous, handsome and cunning champions to save me from evil. Whether I was stuck in a tree, being bullied at school, getting felt up by Jimmy Holstrom at recess, or crying over spilled ice cream, my personal super heroes were always there to swoop in and save me.

I’m twenty-eight now and still getting caught in trees, bullied by coworkers and crying over spilled ice cream. Jimmy Holstrom moved away in seventh grade, so he isn’t an issue anymore. (And really, I’d give up donuts for a month to be felt up right now.) Decades later, my brothers still swoop in to rescue me on a near daily basis.

But really, what’s my motivation? Careful people don’t have cool scars to show off. They don’t have exciting childhood stories to tell nieces and nephews. They don’t appreciate the gift of life and how quickly it can be taken away. And they certainly don’t get rescued by foxy super heroes who wear their underwear outside of their pants.

Mysterious trips out of town, a strange encounter with a naked guy and a possible werewolf attack … After a month-long hiatus from super villains, Anna Jennings' life is finally regaining some sense of normalcy. One would assume that after her latest near death experience, she'd know better than to let her guard down too quickly. But as Anna is about to learn, complacency only leads to trouble. Evidently, March is the month for nudity in the world of superheroes. In the past week alone, Anna has seen more nipples and chest hair than she's seen in her entire life, and not the good kind. Things only get stranger for Anna when her sidekick Carl is bitten by what may or may not be a werewolf. Now she has to help him prepare for the full moon, attempt to find time to spend with her sexy boy toy and avoid a plethora of random wannabe nudists, all while battling an invisible villain set out to destroy her superhero friends. Sounds easy, right? Well, no one ever said you need super powers to save the day.

I pondered that as we passed a caricature booth. A small group of elderly women surrounded one of their friends as she posed for the artist. A woman clad in lavender velour took one look at me and gasped, bringing me to the attention of the entire group.

“Goodness gracious!” she cried as she rushed over and began running my cape between her fingers. “What on earth are you wearing?”

I searched for Blake over my shoulder and found nothing but the bustling crowd. “Um … It’s a costume. I’m a performer down on the end of the Pier.”

“Dorothy, did you hear that!?” cried another woman sporting a sunhat the size of a manhole cover. “She’s a performer! Oh, honey. Won’t you put on a little show for us?” The women behind her squealed with delight, nodding and clapping furiously.

“Well …” I hedged. Lying on the fly is not my forté. “I’m not a solo performer. I’m a magician’s assistant. My partner … He’s … Well, he ate too many funnel cakes, so he’s visiting the commode.”

“Ah… Funnel cakes will do that,” agreed a tiny, wrinkly old woman in what looked like a frilly pink romper. “My Walter, God rest his soul, called them Hansel and Gretel Cakes. Whenever he’d eat one, he’d leave a trail behind him on the way home. Not of bread crumbs, of course …”

My eyes bulged in horror as the group nodded in understanding.

The lavender lady finished fiddling with my cape and shuffled around to my front, eyeing the bird logo screen printed on my chest. “What does this stand for, honey?”

I had no idea. I’d never asked Carl what it stood for. I shrugged my shoulders slightly. “I’m not totally sure. A friend made it for me.”

“Is that right? Well your friend has some serious talent! The workmanship on these stitches is wonderful! Do you have any extras I could buy off you? Perhaps something in a light purple or periwinkle?”

“I’ll need a built-in brazier for mine,” chimed a heavy-set woman in the back.

“Well at least I won’t have to roll mine up like a couple of boobie burritos, you saggy old bitty! Good gravy, if you had nipple rings, they’d leave sparks on the cement everywhere you walked!”

The gaggle of grandmas immediately erupted. Sunhat lady began tucking her breasts into her trousers in preparation for their showdown. Lavender abandoned fondling my super suit to help hold back hammock boobs. I took the opportunity to slowly back away from the chaos and melt into the passing crowd.

Chicago isn't exactly a stranger to bizarre happenings. Crime sprees are a daily occurrence in the Windy City. However, over the past few weeks, not only has the crime rate skyrocketed, but assailants have gone missing. When Vance Publishing employees start acting strangely, (i.e. Crying hysterically over dead goldfish and attempting to choke someone to death with a handful of macarons) it is up to the team at VP to find out what's happening and put a stop to it. While Anna Jennings may not be a novice when it comes to bizarre episodes, she doesn't usually find herself butt-deep in whipped cream on a Monday night. As if that isn't bad enough, she has to juggle a failing relationship with her long-distance boyfriend and a sexy boss who has suddenly embraced his divorced status. Get ready for more crazy hijinks and sexy superheroes in "Power Play" - Book Three in the Anna Jennings Super Novel Series!

I stepped off the elevator onto my floor and my nostrils were immediately assaulted by the intoxicating smell of chocolate. It was all I could do to not moan inappropriately. I followed the scent across the floor, past Mae’s empty desk and into my office. There, sitting on my desk, sat a large pile of … something. Quite honestly, it looked like someone lured a buffalo into my office and allowed it to defecate on my mousepad. How something so heinous could smell so tempting is beyond me. I had no idea if I was supposed to eat it or cover it in a gallon of kitty litter.

“What smells so good and who the heck shat on your desk? Did you piss somebody else off this week?” Blake stood behind me, just outside the doorway, gaping at the pile of chocolate poo.

“Probably,” I admitted. “I can’t think of the last day I didn’t piss somebody off.”

Blake turned to let Mae through and slowly followed her into my office.

“Anna, I hope you don’t mind but I brought you another treat from my baking class.”

I accepted the mug of coffee from her and took a sip, my eyes glued to the brown pile on my desk. “What exactly did you bake, Mae? It smells delicious.”

“It’s a chocolate jelly roll, of course.” She set my customary box of granola clusters on the corner of my desk and dropped a handful of mail in my inbox.

“How does one eat a chocolate jelly roll?” I asked, daring to poke my index finger into the frosting. I touched the tip of my tongue to it, took a moment to absorb the flavors, and nodded in appreciation. It was actually quite delicious.

Mae chewed the inside of her lip as she considered her concoction. “You know, I’m not sure. Normally you’d just slice off a piece. I suppose I could go grab a ladle.” 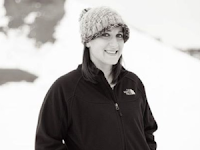 E.J. Whitmer is a young-ish Iowa native who spends her days working in marketing and design. When she is not working or writing, she likes to spend her free time cooking, crafting, attending sporting events, harassing her outrageously good-looking husband or cuddling her new son.