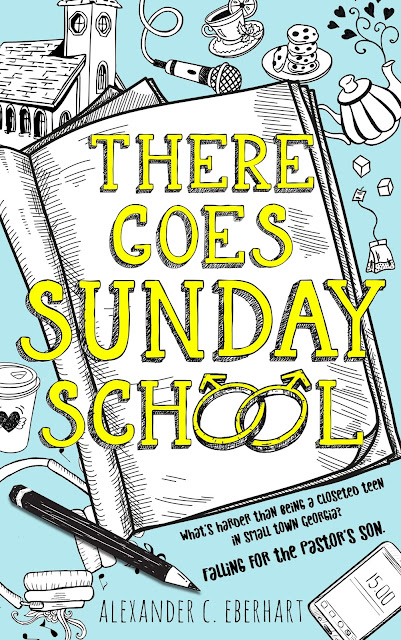 In sixteen-year-old Mike Hernandez’s life, only one thing is clear: Gay is NOT okay. His family’s life revolves around the church, a church run by the vocally intolerant Pastor Myers, so Mike has resolved to spend his life in the closet. His only escape—besides the occasional, anonymous gay make-out session—is his art. He pours his complicated emotions into risqué drawings he keeps in a secret sketchbook. A sketchbook he carries everywhere.

When his sketchbook goes missing in the middle of Sunday school, Mike is sure his life is over. He’s going to be outed, ostracized by their community, condemned by the pastor, maybe even homeless. What’s worse, the pastor’s son, Chris, suddenly seems hell-bent on adopting Mike and his friends and he has no idea why.

When an awkward confrontation with Chris leads to an unexpected kiss instead of a much-expected punch, Mike’s world is turned upside down. As their friendship grows and faith is questioned, Mike may be forced to choose between the comfortable life he's always lived and a chance at the love he never thought he deserved.

“Ow! You’re on my foot!” I push the blonde away, worried that someone will hear us on the other side of the bathroom door. Lord, it’s hot in here. There’s sweat dripping down my back and a clump of dark hair sticks to my head. Melancholy music bears down from outside, loud enough that it shakes the thin walls around us.

“Sorry,” mutters the guy who’s name I can’t remember, then his lips return to my neck, nibbling playfully.

I don’t really understand his fascination with my Adam’s apple, but hey, who am I to judge?

God, I know this is wrong, but I would really appreciate it if you just turned Your omnipotent gaze for like, five more minutes? That would be awesome, Big Guy.

A nasty smell coming from the urinal in the corner is burning my nose. Maybe this wasn’t such a good idea? Then again, it’s the last night I’m stuck in this hell-hole, and when else am I going to get the chance for an anonymous make-out session?

“Alright campers,” a charismatic voice echoes through the space over the strumming of a guitar, “we’ve had a great week here at Pineland, and tomorrow we go back into the world. So tonight, give it your all!”

“Yeah,” I mutter, looking down at the mess of blonde hair. “Give it your all.”

“Lyrics are up on the screen, so let’s praise His name!”

Jeez, Blondie is really getting into it. His hands drop down my stomach, and I jolt.

He only gives me a grin, flashing pearly whites. He’s a little shorter than me, even though he told me he’s a senior. I wonder how he gets his hair to stay up like that? Mine goes flat just walking outside in this muggy weather.

I should ask him what product he uses.

His teeth scrape against my throat and I’m derailed.

“Hey!” I shove him again, limbs tangled. “No biting! We talked about this—nothing that leaves a mark.”

The obvious bulge in his jeans that keeps rubbing against my thigh is the punctuation that backs up his statement.

How many boys have I kissed at this point? I’m sure You’re keeping track up there, Big Guy. Want to overlook the blatant lying too? It kinda goes hand-in-hand with the whole in-the-closet situation.

My hand on his chest stops him, “Just cool it with the bicuspids, okay?”

Blondie nods, closing the space between us as his lips press into mine with enough force to move me back a step. My back hits the wall, and his tongue is practically down my throat.

Jeez. This guy needs to get out more. Then again, judging the deep drawl and the fact that I saw the church bus he got off of earlier this week, I’m guessing there aren’t a lot of openly gay guys just floating around Jasper county. I feel for him. It’s easier for me to find someone to lock lips with on the DL, being so close to Atlanta. Hell, it’s the Mecca for all gay kids this side of the Mason-Dixon line. It calls to us, promising nights of flashing lights, drug-hazed dancing and—if you’re lucky—consensual sex. But that mostly depends on how believable your fake ID is.

The chorus of voices swell from just outside those thin walls, adding to the pressure and the heat of the moment.

God, I really love this. Does that make me a bad person?

Blondie presses into me, producing an awesome amount of friction that sends shivers from the base of my spine. For someone who’s so inexperienced, he knows how to turn me on. And on I am turned.

“When sorrows like sea billows roll.” The voices sing.

There’s something rolling down my leg, but it most assuredly is not sorrows. If this goes on for much longer, I’m going to have to change pants.

I’m so going to Hell.

“Whatever my lot, thou hast taught me to say.”

“Oh my God,” Blondie breaks away, gasping for breath. A bit of saliva is clinging to his bottom lip and those deep green eyes are filled with a hunger so ravenous I don’t know if they’ll ever be satisfied. “This is so much better than I ever imagined it would be. I mean—”

“Yeah, it’s incredible, stop talking.” I interrupt, silencing him with another kiss. I pull his shoulder, turning him around so that now it’s me that has him pinned against the wall. My free hand drifts down, running across the front of his jeans. That makes his squirm with delight.

My lips trace his neck, mapping out the spots that cause him to gasp. There’s a lot of those spots.

“Oh, God.” Blondie jerks, words changing into unintelligible gasps as a new heat fills the palm of my hand. I pull away, a fresh stain spreading across his crotch. “S-Sorry,” he mutters, face flushed and chest heaving.

“Don’t be,” I laugh, adjusting my own discomfort between my legs. “That’s kinda the point.”

“It is well, it is well, with my soul.” The hymn continues through the walls.

“That was so hot,” Blondie is still breathing hard, leaned up against the wall and eyes half-lidded. “Do you want me to help you get off?”

“Nah,” I’m already running my hands under the stream of water in the sink. “I don’t want to have to clean up another mess.” A coy smile over my shoulder, and I add, “You’ve already made one.”

Blondie blushes again, and I laugh. After my hands are dry, I toss the wad of paper towels in the trash can. “This was fun,” I can already feel the awkwardness start to grow like a fungus between us. “Great way to end the summer. Thanks, I needed that.”

“Can I give you a call sometime?” Blondie’s still over-eager, despite his emission.

He’s cute. But no one is cute enough for me to take that kind of risk.

“Sorry man,” I pat his shoulder, “I can’t do phone numbers.” And with that, I unlock the door and leave my newly moistened friend behind.

Taking a deep breath, I sneak back into the chapel, a little surprised I don’t immediately burst into flames. Then again, my parents always say God has a sense of humor. Having me suffer through the rest of this endless song is worse than any circle of Hell.

“It is well, with my soul.” I join with the crowd.

While I don’t read a lot of young adult stories, every now and then one will come along with a blurb enticing enough to pique my interest.  That was the case with There Goes Sunday School—something I was surprised by since I tend to keep away from books where religion plays a significant part.  But the premise of this story, and the thought that with the pastor’s son involved someone might get their due, I didn’t want to pass this one up.

If you like books that really show the conflict and confusion of characters who are exploring their sexuality, you’ve definitely found the right book.  The author does a fantastic job at showing Mike’s struggle with what he’s be taught to believe, and what he feels in his heart and head.  It came across as a realistic portrayal of what teens go through, with Mike’s internal battle and his legitimate worries about his family, friends and church.  I was even more intrigued by the views Chris had (considering his current thoughts on the subject of religion align closely with my own).

I liked Mike’s closest friends well enough, though I was not a fan of the overly casual drug use among them.  I was also a fan of Mike’s sister and how supportive she was, as well as Chris’s mother.

This was a great coming of age story, an exploration of one’s sexuality, and falling for someone for the first time.  It was a 4.5-star read for me, and I’d definitely recommend it.  While it is classified as young adult, I’d caution that with some sexual content, profanity, and the drug use that this should be for ages 16+, and I’d consider it more of a mature young adult story.  And while I might have been personally disappointed at part of the ending, it really is an accurate representation of how things go with those first loves.

Alexander grew up in the Metro Atlanta Area his entire life, moving from suburb to suburb, just on the outskirts of the city. He’s always had a passion for writing, even from a young age. He still lives on the cusp of Atlanta, inching his way ever closer to finally becoming the City Dweller he’s always wanted to be.

In the meantime, he spends his days writing stories with queer characters and drinking an unfathomable amount of coffee. When he isn’t crafting quality queer fiction, you can find Alexander most likely curled up alongside his boyfriend, watching a movie or another equally lazy task.