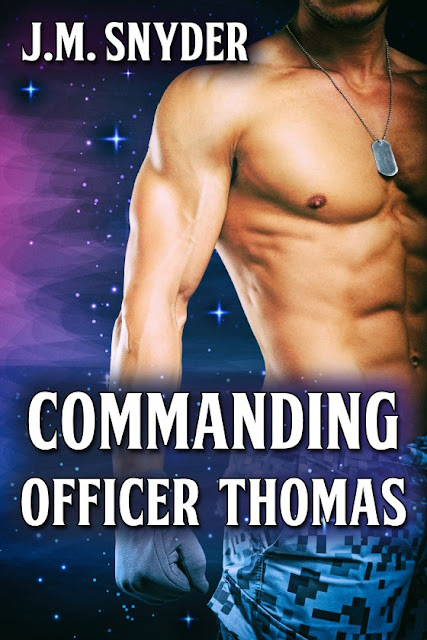 
Lieutenant Lee Mallory spends his time off duty playing video games. There isn't much else to do while stationed on the USS Nova out in deep space.

Unfortunately, a run in with his commanding officer, Jonan Thomas, strips him -- and everyone else onboard -- of their gaming privileges.

Thomas has had it in for Lee from day one, when they got off on the wrong foot. Now, banned from using the game server in the rec room, Lee sneaks online in his quarters after hours, looking to play.

That's where he meets a fellow gamer onboard who's interested in a different kind of game. As much as Lee wants to hook up, though, he can't afford to get into any more trouble.

Can Lee take command -- in the game and in the bedroom -- without further aggravating his CO?

Lee kept an eye on her as she benched the weight, but most of his attention was diverted to the sexy guy now doing side planks. Lee toyed with the idea of approaching him, but how would that look? Hey, I saw you exercising. You’re kinda hot. Any way he played it out in his head, he knew it sounded like nothing more than a bad pickup line.

The guy jumped up from the plank and ran in place, feet a blur, knees pumping double time. Then he started doing lunges, alternating legs and turning a quarter turn with each set.

As he turned, Lee admired the way his little gym shorts pulled taut across his pert ass. When he added arm crunches to his routine, the muscles in his arms stood out, veins cabling in relief.

Lee watched, entranced. He liked this one -- so energetic. What would that energy be like in bed? His d*ck stirred at the sight of the guy’s buttocks flexing beneath the thin fabric. He imagined them both naked together, in his quarters, that round ass clenched tight and waiting beneath him. He could almost feel that pliant flesh in his hands as he massaged those ass cheeks, kneaded them, then pushed them together to ease his c*ck between them. He could almost see the dark tip of his d*ck peek out between the juicy twin mounds as he humped them once, twice, God. Just thinking about it made him hard.

Below him, Brenna made an exasperated sound. “Dude, you’re tenting. Chill.”

Lee shifted his legs to hide his budding erection. Budding? Hell, a few minutes more and he’d get off on his fantasy alone.

The barbell clanked back into the rack and Brenna sat up. Then she grabbed her towel off the bench and wiped the sweat off her face. With a sigh, she said, “Look, I know when I’m being ignored.”

Sudden fear lurched in Lee’s chest. “What? I can’t. I don’t know him.”

“But you want to,” Brenna said. “So go over there and introduce yourself.”

Across the gym, the guy they were discussing stopped exercising abruptly, as if he’d heard them. He raised his left leg, then reached back with his right hand to grab his foot and pull it back into a slow stretch. After a moment, he switched legs. Then he twisted at the waist, and he caught Lee staring.

Before Lee could gather up his courage, the guy grabbed a nearby towel to wipe down and headed their way.

The pressure was on. Lee’s palms grew slick, his cheeks burned. This was it, his moment, go for it. But what should he say? “Hey baby,” was a bit too blunt, but “Sup” sounded too informal. The guy was coming closer, he was almost close enough to speak to, damn.

Suddenly Lee’s mind locked up, and his mouth moved on its own. His tongue curved over his teeth, his bottom lip curled, and he let out a randy whistle.

The guy froze and stared at them. His eyes were dark -- blue? black? Lee wasn’t sure, but they flashed under heavy brows knit together in confusion or anger, one of the two. Not exactly the reaction Lee had hoped for.

“Was that directed at me?” the guy asked.

His voice was level, calm. Maybe Lee was misreading the situation. Still, just to be safe, he gave a one-shouldered shrug and made a noncommittal noise he hoped could be read as either yes or no, depending on how it was interpreted.

Maybe he was interested, after all. Lee tamped down the flicker of hope in his chest. “Lee. Lee Mallory with the 58th. This is --”

The blasé way he drew out Lee’s name set off all kinds of warning bells. “How’d you know my rank?”

Rubbing the towel over his close-cropped hair, the guy sounded casually disinterested as he replied, “You’re right. We haven’t been formally introduced. But I’ve heard all about you, Lieutenant.”

Beside him, Brenna groaned. “Oh no.”

Lee still didn’t get it. “What do you mean?”

Now he smiled, a cold, hard slash across his face. “It’s Thomas. And you’ll address me as Commander or sir, is that understood?”

“Sir! Yes, sir!” Lee snapped to attention, as if that might help dig him out of trouble.

It didn’t. “So I’ll ask you again,” Thomas drawled. “Was that whistle directed at me?” 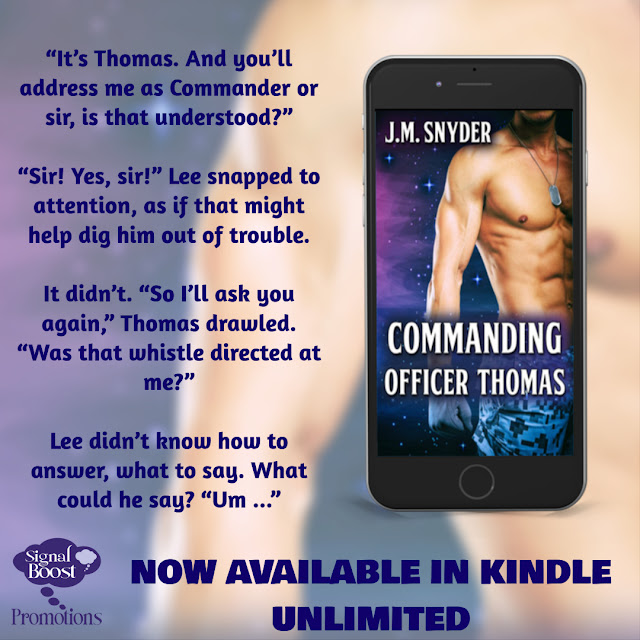 If you’re looking for a quick read that’s also pretty darn hot, you’ll find that Commanding Officer Thomas will fit the bill quite nicely.  Even though between the book title and the screen name of Lee’s potential hookup it’s pretty obvious what’s going on and who is who, the flipping of the power dynamic is still a tempting draw for the story.

Though this is a short story (you can read it in anywhere from a half to one hour), it still has a pretty good setup.  And while like many short stories it did leave me wanting more, it’s still a good bit of entertainment if you’re short on time but still want an enjoyable read.  I’m hoping that maybe in the future these characters will pop up in a longer tale, because my interest in them was piqued enough to want to know more about them and where their relationship might go.  Lee and Joe are great together (not to mention all kinds of sexy), and I would definitely be interested if the author were to put them in a longer story.

Commanding Officer Thomas gets 4 stars from me, and that does take into consideration that the length of the story only allows for just so much to be told before it ends.  As long as you go into this book knowing it’s a quick look at these two men and how they start out, and not a complicated story about their entire relationship, I think you’ll enjoy this look into their lives.  This book is meant for readers 18+ for adult language and sexual content.