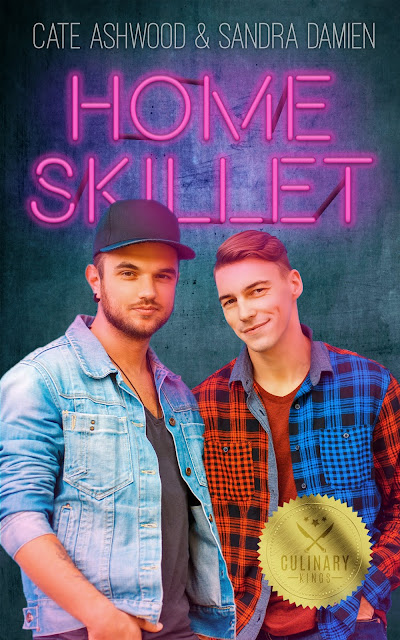 Series: Culinary Kings
Home Skillet is the first book in Culinary Kings, which is a series of foodie-related books, however, they are all standalones with no overlapping characters or storylines
Authors: Cate Ashwood & Sandra Damien
Length: 50,000 words
Genre: m/m contemporary historical romance (set in the late 90s in New York/New Jersey)

Blurb
Sometimes the only way to move forward… is to go back.
JAMES

I don't know what's more shocking—the sudden end to my marriage, or the fact that I'd married a woman at all. But now I'm broke and homeless, kicked out of my Upper West Side apartment while my ex-wife walks away with everything we've ever worked for.

So what's an executive chef stripped of his dignity gonna do?
Go back to Jersey with his tail between his legs, that's what.

I can’t say that spending a decade pining after my best friend was the best use of my time. While I'd pretty much become an expert at the whole unrequited love thing, I'd resigned myself to the fact that Jimmy and I were never gonna happen. But when Jimmy turned up on my doorstep in his hour of need, I jumped at the chance to offer him my bed—er, couch. I mean, what are friends for, right?

Now that he's released from the shackles of matrimony, I can't wait to show him exactly what he's been missing out on all these years.

What I didn't anticipate was him showing me that maybe I'd been missing out too.

There’s something about a second chance romance that’s just extremely satisfying to me as a reader.  It’s finally getting that happy ending that should have happened the first time around if not for whatever circumstances happened at that time.The hard part is the awkwardness of getting there the second time around—something that was painfully obvious for Ben and Jimmy.  The fact that they were best friends before they hooked up that first time, and still really are helps to complicate things even more.

Jimmy’s situation is a common one—religious parents and a family he hasn’t come out to and a “beard” marriage that suits both him and his wife…until it doesn’t.  And when it doesn’t, he goes to the one person who really doesn’t want him to come crashing back into his life—Ben.  There’s a lot of friction between them, though Jimmy seems somewhat oblivious to the reason why—even though it’s crystal clear to Ben and anyone reading the story.

As far as Jimmy goes, I wasn’t too enthused with his character for about the first half of the book.  Once he got his head out of his butt, I became a bit more comfortable with him.  Ben is a bit of a pushover when it comes to Jimmy since he’s never stopped loving him, but once the second half of the book kicked in, this actually starts turning into Ben being incredibly supportive of Jimmy—particularly when it comes to Jimmy’s family.

Jimmy’s wife is one supporting character that I started out with a not-so-nice opinion of at the beginning, and I was harboring quite a bit of ill will towards her for much of the book.  It’s amazing how one scene placed at just the right moment can sharply impact how I view a character…though I’m not going to say just how my opinion was impacting or when it happened (yep, teasing I know).

Home Skillet was a good read, with the second half of the book making up for the awkwardness of the first half.  Overall it was a 4-star read for me, and I’ll definitely be continuing on with the series.  This book is meant for readers 18+ for adult language and sexual content.

Cate Ashwood
Cate discovered her love for books of all kinds early on, but romance is where her heart truly lies. She is addicted to the happily ever afters and the journey the characters take to get there. Currently residing in White Rock, B.C, Cate loves living just a stone's throw from the ocean. When she's not writing, she can be found consuming coffee at an alarming rate while wrangling her children, her husband, and their two cats.


Sandra Damien
There’s two sides to Sandra Damien: some days she’s utterly hilarious (at least in her head), and there are times her dark twin reigns. Her stories reflect both, but the one thing that unites them is, of course, love.

In a former life, she used her degree in psychology for the good of mankind, but she has since left the corporate world to concentrate on her true loves: her kids, writing, and finding errant commas—not necessarily in that order. An Australian uproot with a penchant for wine and the sweeter things in life (send chocolate, please), Sandra has found herself settled in Vancouver, Canada, with a partner-who-won’t-commit, three minions, and two Tamaskans.