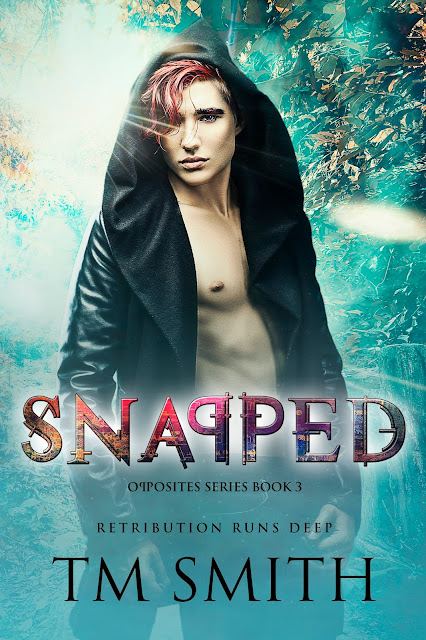 Cillian feels his life was stolen from him and is out for revenge. Grieving and seeking retribution for the death of his twin sister, August is easy prey. Cillian latches onto his grief and feeds into it, using the Outkast as a weapon to strike out at the family that abandoned him. When August learns the truth behind his sister's death, everything changes.

Hector arrives at House Gaeland for a wedding, only to wind up in the middle of an unexpected war between brothers. He finds himself inexplicably drawn to an Outkast with hair as fiery as his temper. The immediate, intense, and mutual attraction stirs up an entirely different set of issues. To be together, August and Hector will need to thwart the most evil of plans and accomplish the most daring of rescues, all before Cirian follows through with his threat to drop August off the side of a cliff.

The people of House Gaeland have endured much, and yet, there is more trouble on the horizon. A birth and a wedding are far too much happiness for the universe to allow, so to level the playing field, the devil must add his cards to the deck. Violence begets violence and Cirian is perfectly willing to take a dagger to his brother, if need be. Will he feel the same if the blood spilled belongs to someone much closer to his heart?

Snapped is the third book in the Opposites series, the series must be read in order. It is an adult, dystopian majorly M/M series that encompasses all manners of relationships (including M/F and F/F). In this world logic is irrelevant, love is key, and things get broken—just ask Aiyan and Kaden.

*Warning* there is a brief mention of sexual assault, though not in detail. 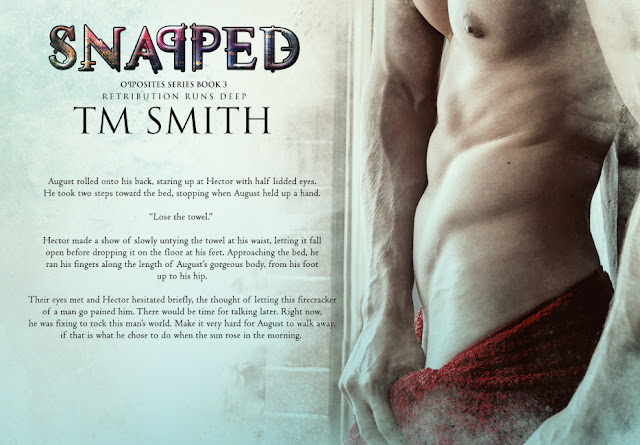 
Okay, first off—if you haven’t read the other books in this series, you’ll want to do that first before picking up Snapped.  TM Smith has built an amazing dystopian world here in the Opposites series, and you’ll definitely want all of the background before starting this story.  There’s an intricate web of characters and relationships, and every one of them play an integral part in the entire series-let alone in this book.

While the synopsis might give the impression that Snapped focuses primarily on August and Hector, we actually get a whole lot more.  So many of the characters I’ve grown to love throughout this series play major roles in this installment, and at this point in the stories all of the characters have reached tremendous depth which in turn makes Snapped a richer, more robust tale.  I was personally thrilled with the amount of page time Raven and Tanis had in this story, and can’t wait to read more about Apollo and Ian as this series continues.

August is bitter, devastated by his sister’s death, and wants retribution—though as time goes on he becomes more and more conflicted as he learns the full story of what happened.  Cillian doesn’t care—he’s just fine using August to help him achieve his own goals as he plans his revenge on his estranged family.  When Hector comes into the picture, it complicates things even more for August-leading to plenty of drama and discord as events play out.  If you’re like me, you’re going to find Cillian a twisted, detestable man—he certainly plays his villain role perfectly.

What I love about this story—the emotion, the drama, the couples (I can’t get enough of Aiyan & Kayden, Raven & Tanis, and of course Cirian and Rian).  The intense bonds the couples have makes it so I find myself completely invested in all of them, totally absorbed in the Opposites world.  What I didn’t love—Cillian.  This man has caused so much pain, and what happens here in Snapped when his plan goes a bit sideways—let me just say that he deserves a lot more than what he gets in the end.  What I was a little on the fence about (and the only reason this wasn’t five stars for me)—how fast things progressed with August and Hector.  Even though other couple matches in this series have been just as fast, if not faster (I’m looking at you two Aiyan and Kayden!), for some reason with August and Hector it felt just a bit too fast for me.  They’re still a hot and steamy matchup, and I really liked how protective Hector was of August.

Snapped is a great entry in the Opposites series, and satisfied my need for more of the couples in this world while really piquing my interest for what will come in the future for little Apollo and Ian (oh my goodness Apollo was just wonderful in this story!).  4.5 stars, and I do very highly recommend this series to all M/M romance fans, and dystopian fans in particular.  This story is meant for readers 18+ for adult language and explicit, scorching hot M/M sexual content.  There is a scene dealing with sexual assault that may be disturbing or a trigger for some readers. 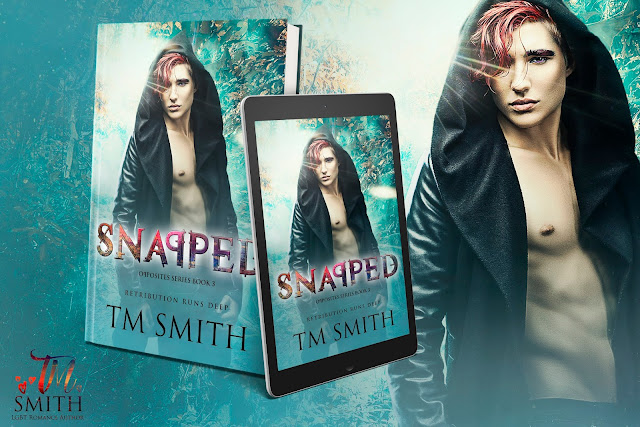 Available in Audiobook summer of 2017!

Up for grabs are two prizes...

Grand Prize goodie bag is US only shipping and includes a signed paperback copy of either Opposites with The Library or Appearances with The Cellar, series inspired swag and an Author TM Smith image collage coffee mug.

Runner up is for International readers as well, a $20 Amazon or Barnes and Noble giftcard, winner's choice, to be delivered electronically at the end of the tour.