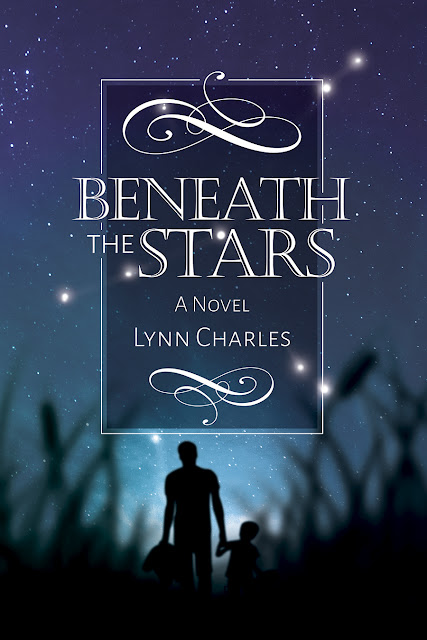 Sid Marneaux puts his fashion career on the line when he returns home to care for his ailing father. When he meets the new fire chief Eddie Garner, their romance sparks hot, but Eddie harbors burdens of his own. Through the wisdom of a child and the connection of mothers-now-gone, the men redefine family, career, and most importantly, love.

Sid walked around the center circle and spun around. “It’s smaller than I remember.”
“You’re bigger,” Eddie said, grabbing Sid’s hand. “Does it feel weird being here?”
They sat in the middle of the field. Its size seemed to stretch out, and perspective was restored. “It does. It’s been a long time.” Sid lay on his back and tugged Eddie to join him. “And in all the time I spent on this field,” he said, “I never did this.”
“Did you want to?”
“No offense to present company, but I dreamt it would have been after a winning game with Tyrone Lemmon. Built more for baseball than soccer. Lousy stamina on the field—great ass.”
Eddie laughed. “Jon Marcum. Lousy basketball player. Got cut our senior year. Thighs… for days.”
“Oh, what could have been.”
“Eh, I dated too many exactly like him. We didn’t miss anything.”
Sid looked away from the lights to find Eddie staring at him. “Maybe it wasn’t the right time.”
“Maybe it wasn’t the right guy.”
With a loud pop and a whoosh, the field lights shut off. After laughing at their mutual squeaks of surprise, Sid wiggled closer. They fell silent and refocused on the night sky.
“Is that the North Star?” Eddie asked.
“Yep, Polaris. See? It’s the tip of Little Dipper’s handle. Big Dipper—Ursa Major, my dad would correct—is to the west of it.”
Neither moved or spoke, letting the vastness of the sky rearrange perspective once again.
“I had a nice time tonight,” Sid said.
Eddie reached for Sid’s hand. “So did I.”
The quiet they shared was new for Sid. Everyone had something to say: plans to be organized, money to be made, successes to be touted, or worse, failures to be shamed. As they lay there, the ground cooled on his back; Eddie’s hand rested comfortably in his. Sometimes, silence sang the most beautiful of tunes.
“So,” Sid finally said. “My place isn’t much… but I have fresh peaches. Will you come?”
“I’d love to.” Eddie sat and pulled them up to stand. His cheeks were flushed, his hair was ruffled, but his attention remained on the sky.
“Hey,” Sid said, brushing his finger along Eddie’s cheek. When Eddie turned, Sid caught a sadness in Eddie’s eyes he’d not seen before. Sid knew the sky was for dreaming and melancholy, for longing and love. With his finger at the curve of Eddie’s chin, Sid kissed him, lingering when Eddie’s smile bent beneath his lips. “Thanks for being my first.”

I LOVED this book.  This is one of those stories that I can’t wait to tell you I’ve given a 5-star, top recommendation rating to because it just needs to be said right up front.  Sid and Eddie’s story is beautiful-emotional, heartwarming, sad, sweet and was just a joy to read.  The characters are easy to relate to, and in the middle of it all is the incredibly precocious and intelligent Adrian who pretty much steals the show in every scene in which he appears.

Family drama, especially when it relates to parents being slowly taken from us by illness, always ratchets up the tension in a story.  Here in Beneath the Stars, it makes the evolving relationship between Sid and Eddie more complicated since without that drama, Sid and Eddie would not have met in the first place—and once the drama is resolved, what happens then?  The strain of Sid’s father’s deteriorating health along with the stress of trying to help while his fledgling business back home is just getting off the ground makes things very hard on Sid.  Eddie has his own pain to work through from the loss of his best friend, and he now has his own strained life as he adjusts to raising his son on his own while still grieving for his friend’s loss.  Eddie is the one who holds Sid together, and Sid does the same thing for Eddie.

The emotionally charged relationship that develops between them is healing but becomes is more than Sid can handle—until he realizes he actually can’t handle things without Eddie there to be his rock.  They’re good for each other, and watching as their connection evolving gave me a warm feeling inside as it felt natural, loving and just RIGHT.  And Eddie’s son Adrian—well, this book wouldn’t be what it is without him.  He is brilliant, talented and adds levity and such sweetness to the story.

I was so wrapped up in this story as I read; the writing was fantastic and really drew me in.  I was fully invested in not just Sid and Eddie, but in Adrian as well.  The chemistry between Sid and Eddie was apparent from the start, and everything between them was so comfortable.  Their physical scenes ranged from loving and intimate to steamy and intense, never overtaking the story.  You can really feel the conflict both Sid and Eddie go through as they try to work out being together long-term.  My feelings were one hundred percent involved in their happiness, and I loved how everything turned out.

Beneath the Stars is a story that just made me happy in the end, and it truly deserves the top recommendation, 5-star rating I’ve given it.  M/M romance fans will definitely want to add this to their library…and I dare you not to fall in love with little Adrian.  This story is meant for readers 18+ for adult language and M/M sexual content.  This was the first story I’ve read by this author, and I’m certainly hooked! 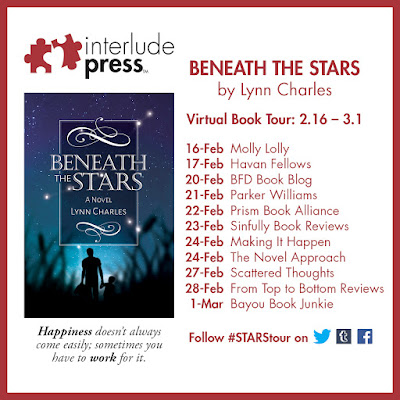 AUTHOR INTERVIEW: BENEATH THE STARS—LYNN CHARLES

Today I’m very lucky to be interviewing Lynn Charles author of Black Dust. Hi Lynn, thank you for agreeing to this interview. Tell us a little about  yourself, your background, and your current book.

I'm happy to be here! I’m an author, wife and mother living in Central Ohio. I’ve  been writing—from lavish journal entries to fictional stories—most of my life. My first novel, Chef's Table, was published in December 2014 with Interlude Press. Black Dust is about a couple who, fifteen years after a tragic car accident tore  them apart, are given a second chance to heal and to love.

What’s the easiest thing about writing?
Coming up with the seed idea that gets the ball rolling. Keeping the ball rolling can be easy, but sometimes you’re pushing that fool thing through rough terrain, up steep hills, or through depths of muck. Coasting to the end is usually pretty easy too—especially if you’ve laid the proper groundwork for a solid end.

Name one author (living or dead) you’d like to write  with?
Jennifer Crusie. She writes hilarious and smart romantic comedy in a style I’ve always enjoyed: strong dialogue, layered stories and rich characters from supporting to lead.

Tell us about your cover and how it came about.
My publishing company is blessed to have the most talented CB Messer as art director. After she’s read the manuscript, we have a conference call and discuss ideas I might bring to the table. I, however, had few ideas this time: no faces and a gif I had seen online that represented the colors and a general movement I’d like to see. How she took those meaningless requests and made it into the gorgeous cover I have, I’ll never know. I’ve come to believe she’s a wizard.

Is this book part of a series? Do you have ideas that could make it into a series? If it is a series, tell us a little about it.
It is a stand alone book, but if I were to do a series, I think I’d be remiss if I didn’t expand Rue’s story. She is Sid’s assistant at his company in Chicago: strong, wise, has a layered backstory and would have a girlfriend of equal interest… or she’d be pursuing one like that anyway.

Word association. Tell us the first thing that comes to mind when you read these words.
Ketchup—hot dog
Flakes—frosted (I might be hungry)
Elastic—waistband
Timer—dinner’s ready (yes, I’m definitely hungry)
Google—chaotic information

Lynn Charles’ love of writing dates to her childhood where thoughts, dreams, frustrations, and joys poured onto the pages of journals and diaries.

She lives in Central Ohio with her husband and adult children where a blind dog and his guardian cat rule the roost. When she’s not writing, Lynn can be found planning a trip to New York or strolling its streets daydreaming about retirement. Her previous novels include Chef’s Table (2014) and Black Dust (2016).