New Release-Excerpt & Giveaway: AS THE SUN SETS by RJ Jones 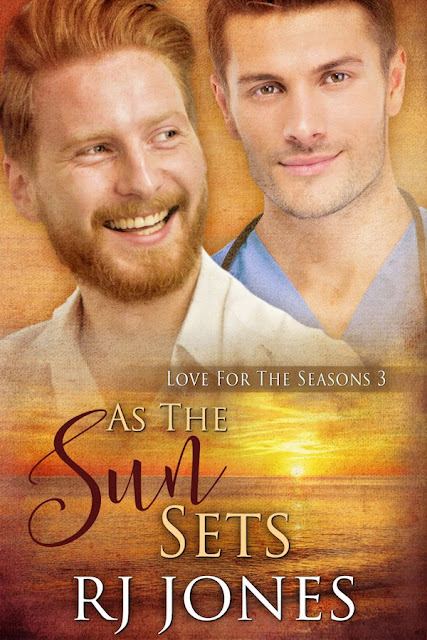 As the Sun Sets (Love for the Seasons #3)

A sea change could be just what the doctor ordered.

Doctor Scott Penney used to be a Paediatric Oncologist—until he burned out. Watching children suffer and die took its toll on his mental health. To cope, he used anonymous sex as an emotional crutch, thinking it was better than hitting the bottle. But that inevitably destroyed his relationship with the man he loved.
With his tail between his legs and a year’s worth of celibacy under his belt, Scott accepts a position as an Accident and Emergency consultant, leaving his career in oncology and London behind.
Ben Jenkins is a paediatric nurse who loves his seaside city, his job, and his faithful old Labrador, Happy. When he meets the new doctor, Ben falls for Scott’s kind-yet-reserved personality—not to mention his good looks. Scott is great with the children who come through the hospital, but Ben senses there’s more to Scott than meets the eye.
Scott tries to resist Ben’s sunny charm—Scott’s not boyfriend material, after all—but it’s impossible not to fall in love with the sad looking old dog and his charming owner. As Scott and Ben get closer and the weather heats up, tragedy strikes and Ben is left wondering how much of Scott’s history he actually knows.
For them to move forward, Ben must show Scott that no matter what happened in the past, a beautiful day can always start after the sun sets.

**This can be read as a standalone**

Amazon
available only on Kindle Unlimited!

Scott shrugged into his jacket. When he smiled at me, it didn’t reach his eyes like it had earlier. “Goodbye, Ben. Thanks for the chat. Have a good couple of days off.”

I glared at Emma before grabbing my hoodie and going after Scott. Something wasn’t quite right and I felt I owed him an apology. For what, though, I didn’t know.

“Scott, wait.” I caught up to him as he pushed through the door and headed onto the street. “I’m sorry. Emma can be quite… blunt when she’s sober. The champers makes her more so.”

Scott smiled sadly. “It’s okay, really. I had my doubts about going tonight, but it has nothing to do with Emma or anyone at the hospital. I haven’t been one to socialise lately, but I’m glad I came. We work with some pretty good people.”

I grinned, feeling a little better that we hadn’t made him uncomfortable enough to leave. “I have to agree with you there. I couldn’t imagine working anywhere else.”

We stared at each other for a long second, our gazes locking as a small current ran between us. In the far-off distance, I could hear the odd car passing or the screech of a gull overhead, but Scott kept looking at me, his intense gaze holding me captive. My heart leapt into my throat. The connection I felt earlier was back, making my mouth dry up. I licked my lips and was surprised to see Scott watching the movement of my tongue.

“Can I walk you home?” I found myself asking.

Scott shook his head, breaking our moment as he looked away. “Don’t you live the other way?”

“Go back inside and have a drink, Ben. I’ll see you in a couple of days.”

Before I could register what I was doing, I started to lean in but caught myself just in time before I made a fool of myself. “On my days off, I usually run just before lunch. Happy would be pleased to see you.”

Scott nodded but didn’t smile. “I’ll keep that in mind.” He turned and headed up the road, hands in his pockets and head down.

He didn’t turn around before he disappeared up a side street. 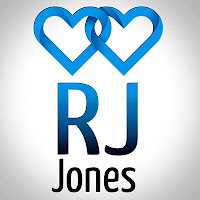 RJ started as a reader and eventually made the progression to reviewing. It wasn't until two men popped into her thoughts, insisting on telling her their story that she started to write. It started with one scene. A hot and dirty one in the shower.
RJ's initial thought was if she could write their scene then they'd shut up and allow her to concentrate on other aspects of the day. That shower scene was 3000 words long and three hours of work.  But they didn't shut up.  They told her their entire story and she didn't sleep for days.  Sometimes she couldn't keep up with what they were telling her and she had to keep a notebook by the bed.

Whilst RJ was writing their story a side character decided he needed his story told too. Then other characters followed suit.

You see the problem? If RJ ever wants to sleep again then she needs to write.

RJ is a wife and a mother to two boys. Even her dog is a boy.
She is surrounded by males.

RJ writes emotionally charged, character driven romances. Her guys will always get their HEA, but it will never be easy. 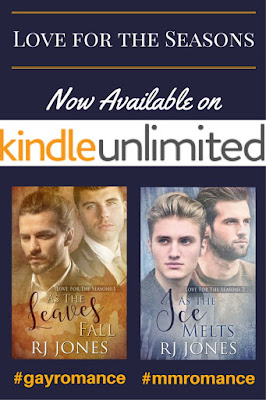 Be sure to check out the first two books in the series!

As the Leaves Fall on Amazon

Check out my 5-star review on Goodreads!

As the Ice Melts on Amazon

Check out my 5-star review on Goodreads!