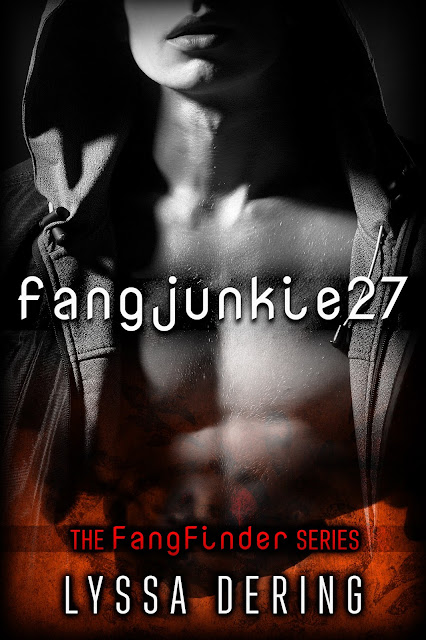 One human. One dhampir. Seventy-two hours where anything goes.

Shameless vampire addict Eli spends every waking moment chasing pleasure, securing invites to vampire den after vampire den via the vampire/human social network FangFinder. This weekend, he's signed up for his most extreme adventure yet, a 72-hour party where a legal contract serves as his voluntary consent to anything and everything the den members decide to do to him...

Strong and silent type Orion is the only member of his den without fangs, a dhampir who wears metal points on two fingers so he can give the human guests what they crave. What he craves is a release for the savage half of his nature; he wants to force a human into submission. When his fellow den members inform him that Eli has signed up for just this treatment, Orion lays claim to him for the weekend.

But Eli would never have agreed to spend three days with a half-breed, and he'll fight Orion's touch every chance he gets. Even if the pleasure he finds in the dhampir's grip is more intense than anything he's ever felt with a vampire...

Want a bit of dark, rough and dirty?  This story will definitely fit the bill.  With an interesting premise and characters that experience growth even with this being a shorter read, fangjunkie27 did capture my attention, though I was left feeling like Eli and Orion’s story wasn’t quite finished.

Eli is definitely an addict, addicted to vampires—the pain, the bite, and just the beings in general.  He’s totally at a loss and quite a bit ticked off once he realizes Orion is a dhampir and not a full vampire…something that Orion is also not happy about either.  What I liked about their story is that in the space of the 72 hours in which their rendezvous takes place, we see Eli go from hating their matchup to not wanting to give it up…if with a little help.  And even though it’s such a short time period, I thought it was still believable (well, as believable as a vampire story can be).

The two of them together are beyond hot, sexy and downright naughty, and those scenes are well balanced with those following the intense difficulty Eli goes through with his addiction and distaste for someone who isn’t a full vampire.  My only lament is that the ending feels more like a happy-for-now instead of happy-ever-after since we have no frame of reference to know if the way Eli comes to accept things will actually last.

3.5 stars for fangjunkie27, and I think paranormal/vampire M/M romance fans will enjoy this story.  It is clearly for readers 18+ for adult language and explicit M/M sexual content.  I hope we’ll get to see more of Eli and Orion in future stories in this series as I think there’s more of their tale yet to be told.