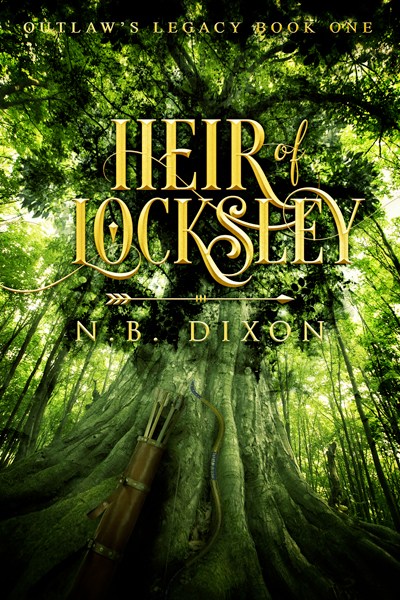 Robin of Locksley is a rebel, more comfortable roaming Sherwood Forest with his longbow and courting the village girls than learning how to run a manor.An innocent flirtation with a peasant girl soon lands Robin in trouble, and worse, he finds himself inexplicably attracted to Will Scathelock, his best friend since childhood. Robin must decide whether to follow the rules of society or his own conscience.Meanwhile, his neighbour, Guy of Gisborne, is anxious to get his hands on the Locksley estate and he will do anything to make it happen—even murder.

I’ve never really had a ton of exposure to the Robin Hood mythology in general-the majority of my familiarity comes from Robin Hood: Prince of Thieves movie with Kevin Costner (yes, I know all the downfalls of his acting and accent in this, but I enjoyed the story it presented and the action/suspense of the film).  But the romanticism of the Robin Hood character is something that draws me in, and I thought the author’s take on the Robin Hood lore was original and quite well done.

As a die-hard fan of gay romance (regardless if it’s contemporary, historical or any other genre), I was initially attracted to this book by the synopsis hinting at something between Robin and Will Scathelock, as I zeroed in on that as the unique element to make this a totally new take on the legend.  Given that, I did find frustration while reading as this aspect was not given much page time, and came across as more of an aside at this stage of the story.  I also found a bit more frustration as I neared the end of the book to realize that this is not where the story ends—we’re left with a cliffhanger, which right now is driving me a bit nuts even with the promise of more down the road…which I will definitely be seeking out the moment it’s available.

The author’s writing is exceptionally-detailed and descriptive without being overly wordy, and though at times I had to put this down when my frustrations grew a bit too much, I was still hooked by the story and fully invested in every character.  We do get to hear the story from multiple characters’ points of view, something I really enjoyed since it gave the story so much more depth.  Robin is everything you’d expect him to be, and fans of the true romantic hero in a story will surely be falling in love with his character.  As for Will, my heart went out to him over and over,  He is patient and protective when it comes to Robin, and the close friendship between them is quite obvious—even if deeper feelings are a bit elusive to Robin’s mind at this point (though we do see a flickering of them a few times late in the story).

If you are coming to this book expecting a grand romance, that is not really what you’re going to find.  What you will get though is action, excitement, suspense, intrigue and a hint of what’s to come down the road.  For me, the discontent comes from the wait to get to what’s coming.  Heir of Locksley sets the stage for readers by giving the backstory of Robin and Guy of Gisborne’s relationship as sort-of friends whose connection becomes irreparably damaged at a young age, leading to Guy’s path of hatred and destruction.  It also fully crafts their world and the characters from it, resulting in a firm foundation not just for this story, but for whatever’s coming for readers going forward.

Even with my bit of frustration, Heir of Locksley was still an engrossing 4.5-star read for me.  I’m now eagerly awaiting the rest of the saga, and would definitely recommend this to any fan of Robin Hood lore.  This story can be enjoyed by readers from young adult on up, though would probably be best directed for readers at least 16+, particularly given the direction the saga will be taking.  Do not expect any steamy intimate scenes—you’re not going to find them here, and really that is not what this story is intended to be about.  It doesn’t need them anyway-the angst and tension is present throughout the pages regardless of which of Robin’s relationships it is centering on at any point in time.