New Release: HOW THE OTHER HALF LIVES by Clare London-Includes Excerpt & Giveaway! 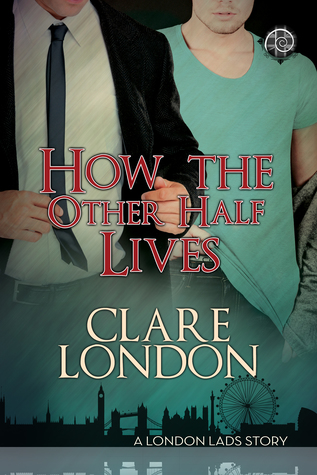 Martin Harrison keeps himself to himself and his Central London flat as neat as a new pin. Maybe he should loosen up and enjoy more of a social life, but in his mind, that's tantamount to opening the floodgates to emotional chaos. He agrees, however, to join the flat-sitting scheme in his building and look after another tenant's flat in exchange for a similar watch over his when he's travelling for his work.

A floor away in the same building, Russ McNeely is happy with his life as a freelance cook and a self-confessed domestic slob. He also joins the flat-sitting scheme, both to be neighbourly and to help keep his flat in order, as Russ also travels for his work.

For a while, the very dissimilar men never meet. Martin is horrified at the mess at Russ's flat, while Russ finds Martin's minimalist style creepy. But in a spirit of generosity, each of them starts to help the other out by rearranging things in their own inimitable way.

Until the day a hiccup in the schedule brings them face-to-face at last.

There’s no way I think Ethan’s amusement is justified, no way at all. I suppose I imagined he would share my righteous horror at the experience I’ve just been through. No… suffered is the appropriate word.

“Holy crap in a handbasket, Martin, if you could only see the expression on your face! Was it really that bad?” He laughs, rather too loudly and too long for my liking. “Come on, we’re living in a sophisticated city, in a hub of the civilised world, not some kind of ghetto. These are very smart flats, and the tenants have to pass some kind of credit check before moving in. Your upstairs flat-sit can’t have been the hellhole you so graphically describe.”

“It was.” I’m still shuddering at the mere memory. “Initially I thought the place had been burgled. I’ve never seen such a mess in my life. Everything jumbled together. Nothing labelled, stacked properly, or cleared away.” Ethan’s still laughing at me, and I don’t approve of his levity. “There were dirty plates, Ethan. Lots of them, and not just in the sink! I found an umbrella in the bathroom, a car maintenance kit in the kitchen, and some correspondence pinned to the wall in the lobby with a fork. Like a…. Like a spear.” It remained the most aggressive vision. “There was dust on the top of every door frame, and a very disturbing colour scheme on the walls of the living room. I had a headache after my first evening visit.”

Thankfully, I catch that glint of mischief back in his eye. “Very amusing, I’m sure. No, I only have to check in on a daily basis. Make sure that the alarm is set, turn off lights that have been left on—every single one, Ethan!—and collect up the post. Sensible things like that.”

From the sly look on Ethan’s face, I suspect he’s still provoking me. “What about it?”

“I believe you can tell a lot by a person’s post.”

“I believe so too,” I reply dryly. “But if that’s the case, I’m not much the wiser, having waded through a mass of free flyers and invitations to various gourmet events. The owner appears to be in the catering trade, or has ambitions to be. Unless they’re a professional gamer—there were several magazines with lurid covers of impossibly cantilevered animated women, or surly assassins dressed in camouflage, with guns larger than their own torsos.”

“How the other half lives,” murmurs my so-called friend, unable to hide his grin. “You sorted through it for the owner, then?”

“Well, of course I did.” I can feel a slight flush on my cheeks. “Among other things. The owner obviously needs help, and I… had a spare hour. For example, I put the car kit and the umbrella back in the hall, and took a large pile of bedding from the living room to the dresser in the bedroom. Then back in the living room, I sorted a total mess of CDs into alphabetical order.”

I’m slightly disturbed that I sound like someone’s domestic help, but I’m also secretly impressed with how efficient I’d been in the allotted time. “Oh, and there was a hideous smell in the bathroom. I was going to alert the caretaker of the building, but upon investigation, I found a filthy bottle of stagnant liquid in the linen cupboard by the boiler. I disposed of that, of course.”

“I did find washing-up the crockery particularly challenging. The tenant appears to cook extensively and uses some very eccentric, exotically flavoured ingredients. If left to dry on the china, they stain—that’s all I’ll say about it.” I finally acknowledge Ethan’s amusement at my expense. “You’re the one who told me to show some neighbourliness.”

“So, you found out who owns this flat?”

“Um. Well, barely.” One would think Ethan assumed some ulterior motive in me, like common curiosity or something equally alien to my calm self-sufficiency. “A person called McNeely, initial R. Apart from that, I have no information. The owner never turned up for the introductory meeting. The management committee provided the key and the details, including the signed agreement to my access.” I shift, inexplicably uncomfortable for a moment. “I’m not sure all of this meets your criteria of making new friends and influencing people, so perhaps I should just let it drop.”

Ethan raises an eyebrow sceptically. I think we’ve either been friends for too long, or else his empathy is improving.

“Okay.” I sigh heavily and a little petulantly. “I’ll persist with it. Actually, I had some ideas for a shoe storage rack in the hallway and more efficient shelving in the kitchen. He might be interested in that, as I’ve never seen so many ill-assorted utensils scattered all over the counter. And I did think a formal message board for him would be an excellent idea.”

“He? Him?” Ethan’s eyelids flicker and his mouth tightens, as if he’s trying hard to keep his expression neutral. Maybe my empathy is improving too.

“I saw his flat, remember? I saw the post. And—” I’m racked with another shudder. “—I saw the piles of unfolded laundry. It’s a male tenant. Please don’t ask me to elaborate.”

“Underwear?” Ethan is relentless. “I believe you can tell a lot by a person’s—”

I glare at him and he bites back the rest of the sentence. “I can assure you, I didn’t stay any longer than necessary. I was going to play some of the CDs that had been left out of their cases, just to check whether they were still serviceable, but I couldn’t get the equipment to work.”

Ethan frowns. “It was broken?”

“No, no.” I’m impatient with him now, and although I like his company, I’m hoping he’ll go soon. There’s something disturbing my thoughts, and I need to wipe the whole flat-sitting episode from my mind. I need to settle back in my own place, on my own, with my things around me. I need… peace. “The place was the most appalling jumble, Ethan. I just couldn’t find the remote control. Then when I was about to lock up and leave, I found it under the—”

Now it’s my turn to bite off my unfortunate words, but it’s too late. Ethan’s all but pounced on me.

“Where, Martin? Where did you find it?”

“Under the laundry,” The flush is all over my neck now. “If you must know, it was under a pile of boxer shorts illustrated with a character called Super Mario.”

Clare took the pen name London from the city where she lives, loves, and writes. A lone, brave female in a frenetic, testosterone-fuelled family home, she juggles her writing with the weekly wash, waiting for the far distant day when she can afford to give up her day job as an accountant. She's written in many genres and across many settings, with novels and short stories published both online and in print. She says she likes variety in her writing while friends say she's just fickle, but as long as both theories spawn good fiction, she's happy. Most of her work features male/male romance and drama with a healthy serving of physical passion, as she enjoys both reading and writing about strong, sympathetic and sexy characters.

Clare currently has several novels sulking at that tricky chapter 3 stage and plenty of other projects in mind . . . she just has to find out where she left them in that frenetic, testosterone-fuelled family home.

All the details and free fiction are available at her website. Visit her today and say hello!