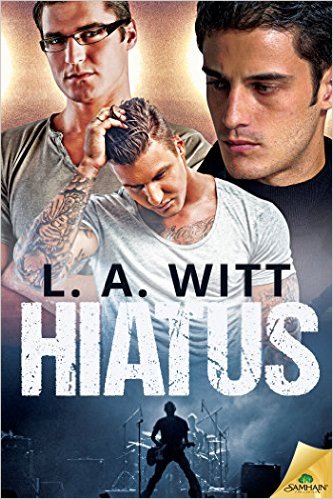 Rock star Nate Keller is on top of the world, but his headlining tour has one drawback. It keeps him away from his boyfriends, Theo and Cameron, for weeks at a time. Yet after four-and-a-half years—and a lot of hard work—the trio is still going strong.

But then Cam comes to visit with devastating news. After seventeen years together, he and Theo have agreed to a trial separation. Nate tries desperately to fix his lovers' broken relationship, but there's only so much he can do from the road.

At home, Cam tries to carry on, but feels like his whole life is spiraling out of control. Theo struggles to cope with the split as his depression worsens. They're both spinning their wheels, quickly losing hope they can keep it together—and keep the man they both still love.

Desperate, Nate drops everything in a last-ditch attempt to pull their trio back together before they hit rock bottom. Except their love could already be shattered beyond repair.

Warning: Contains two men who must face how broken they are before they can fix their failing marriage, and the man who loves them both—but doesn't know how to save them.

The cab driver punched it into his GPS, turned on the meter, and pulled away from the fairgrounds. The enormous parking lot had mostly cleared out, but there were still a few people making their way back to their cars, so I kept my baseball cap pulled over my eyes. As much as I adored my fans, and still couldn’t believe they’d recognize me—never mind mob me—I had somewhere else I needed to be tonight.

In my lap, I turned on my phone and texted my boyfriend, Cameron.

Then I turned the phone over and grinned in the darkness. Cam and his husband, Theo, had flown in this afternoon. I hadn’t seen them in three weeks—not since they’d met me like this at another hotel in another city—and I’d been climbing the walls every night. Skyping, texting, and e-mailing only did so much to make up for the lack of physical contact while I was out on tour. For the last seven months, I’d been on the road, only occasionally dropping back into LA, and in between, seeing them whenever they could meet me. Seven months down, at least five to go, assuming more dates weren’t added again.

Technically, we had an open relationship. Especially while I was out on the road, they had no problem with me hooking up with other guys. The same went for them. The only rules were we had to use condoms with other people, and with each other if we’d been with anyone else.

In practice, though, they were monogamous except for me, and despite the option being open, I hadn’t touched anyone. My band thought it was hilarious—now that we’d actually made it big and could act like the rock stars we’d always thought we were, I was practically celibate. Go figure.

But I didn’t want anyone else. For the last four and a half years, the only men I’d touched were the two who’d welcomed me into their bed and their marriage. I was one lucky bastard too. They were sweet, generous, and both were dynamite between the sheets.

Didn’t hurt that they were gorgeous too. They were different, and yet somehow complemented each other. Fair-skinned Cam, who never managed to get any color despite living in Los Angeles. Theo, who could tan just looking at a photo of a beach. They both worked out and looked the part, and even though they’d long ago left the world of high-powered investment banking, they still looked that part too. Theo kept his dark hair short and professional. Cam looked studious and serious whether or not he had on his glasses. Small wonder they’d caught my eye that first night, since they’d both been wearing shirts and ties.

I shivered. God, those two were the reason business attire had been invented.

My phone buzzed. I turned it over, and Cam had written back.

I put the phone down again and rolled my stiff shoulders. I was seriously tempted to ask him for a massage tonight, but damn it, he hadn’t come here to work. He and Theo were here so we could f*ck each other senseless, which would tide us over until the next tour stop where they could meet me.

Talk about a story that will break your heart.  Hiatus did that to me over and over for more than half of the story...but you know what?  I loved it.  Why would I love a book that hurt my heart?  Because it has some wonderful characters who are beautiful yet flawed, a plot that grabbed my attention and kept it hostage for every page, and writing that flowed so well that I didn't realize how quickly the time was passing.

I really, really loved all three main characters.  I quickly fell for each one of them, and their unique personalities and issues had me caring about all of them right from the start.  I was fully invested in their relationship and became even more so with every page that passed by.  Nate, Cam and Theo are intriguing on their own, but together--Nate and Cam, Nate and Theo, Theo and Cam...and all three together--the interactions are intense in every configuration, not to mention the tremendous chemistry in the couplings and threesome.  When it comes to communication and working on their problems though, that's where you can see the obvious breakdown.

There was a constant stream of drama, angst and arguments, contrasted with a lot of steamy sex scenes.  If you're not a fan of large amounts of turmoil and pain in your stories, be forewarned that Hiatus is filled with this for at least three quarters of the book.  That said, I was happy with the way things ended up...though honestly the resolution and happy parts at the end could have been extended a bit to help balance out all the issues and sadness.  Again, this type of story is not going to be everyone's cup of tea; truthfully, this is not normally how I like the books I read to go.  But something in it kept my heart fully involved, and in the end I was immensely satisfied with this book.

I give Hiatus 4.5 stars, and recommend this to M/M romance fans who prefer their stories on the high side of the angst and drama spectrum.  This is meant for readers 18+ for adult language and explicit, intense M/M sexual content.  The story is told from Nate, Cam and Theo's points of view, so you'll get a lot of depth and much more understanding of each character and their thoughts and feelings throughout the entire story.

L.A. Witt is an abnormal M/M romance writer who has finally been released from the purgatorial corn maze of Omaha, Nebraska, and now spends her time on the southwestern coast of Spain. In between wondering how she didn't lose her mind in Omaha, she explores the country with her husband, several clairvoyant hamsters, and an ever-growing herd of rabid plot bunnies. She also has substantially more time on her hands these days, as she has recruited a small army of mercenaries to search South America for her nemesis, romance author Lauren Gallagher, but don't tell Lauren. And definitely don't tell Lori A. Witt or Ann Gallagher. Neither of those twits can keep their mouths shut…