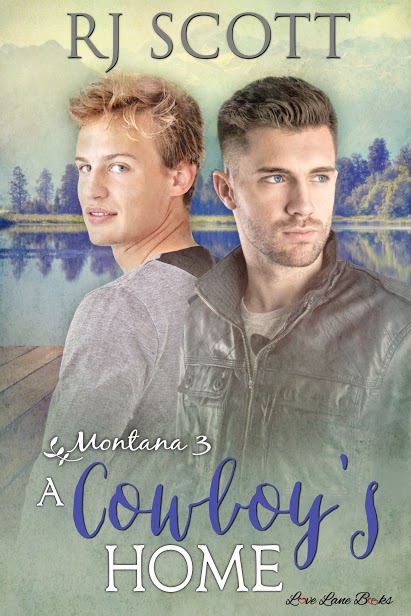 One burned and broken man finds his way home. Can he find peace in the arms of a man easy to love?Justin made the ultimate sacrifice for his country, battling domestic terrorism, never the man he really was, using hate to avenge the death of his best friend. The friend he'd killed.What he doesn’t count on is getting shot, and if he's going to die he wants it to be on Crooked Tree soil. Home.Sam is as much a part of Crooked Tree as any of the families, and the offer to buy into the ranch is a dream come true. But falling for a hidden, secretive, injured man isn’t the way to keep his head in the game.

“Who else knows you’re here?” Justin waggled the gun again and fear passed over Sam’s face.

Too late Justin realized that question would make Sam think too long about what he should reveal. Sam could have the whole ranch coming up after him, in which case he would probably say he was alone.

Or he could be alone, but pretend others knew.

My head is f*cked.

But he didn’t sound convincing, and Justin had been in way too many situations and he could tell that Sam was lying. “And have you called the cops?”

“Yes.” Sam met Justin’s gaze steadily, daring him to call him on the lie.

At least that was how it looked to Justin. “You’re lying.”

Justin gestured with the gun. “No sense in me staying here alive, then.”

“I have three bullets; I can take you down with one, kill the next person through the door, and use one on myself. I’ll be okay.”

Then he very deliberately aimed at Sam’s head. “You first.”

One of the reasons I love this series is the characters. There's a lot of depth to all of them, and discovering everything about the main characters in each book is very satisfying to me. Here in A Cowboy's Home, we get to see Justin's extremely painful journey from the time he goes missing from Crooked Tree until he finally makes his way back. Turns out he's one of the bravest, most selfless men around-even when he was still just a teen.

Sam may not have gone through physical pain like Justin did, but he has plenty of emotional pain from his past thanks to his family. It makes you feel good to see who he's become today, even more so once he discovers Justin on Crooked Tree property and comes to his aid. Sam does what's right, and is there for Justin every step of the way-even when Justin doesn't want any help. The two form a bond that is tenuous but is something for Justin to cling to.

For most of the story, Sam really acts as comfort for Justin-nothing romantic or sexy, just one person caring for another. Development of things between them is slow but always simmering in the background, and the story of Justin's survival, healing and the suspense around his situation are what take the forefront for the majority of this story...though yes, there will be a little bit of heat here and there (just enough to whet your appetite).

I really enjoyed being able to hear Justin's journey after being teased with his missing character in the first two books of the series. It was also great to spend time with all of the other characters from the series as they come to terms with Justin's return home and the ramifications of that.

Justin and Sam actually make a very good couple-they balance each other quite well with Sam providing stability and compassion to Justin's frenzied life and the pain he's suffered and is still suffering. It may be corny and cliche, but the phrase "you complete me" really does apply to the two of them.

This series is best enjoyed when read in order, and those readers who have been waiting to find out what happened to Justin will be very happy with A Cowboy's Home. It was a very solid 4-star read for me, and I definitely recommend this book and the overall series to M/M romance fans. It is still for those readers 18+ for language and sexual content. Oh, and be prepared to fall for both Justin and Sam, not just as a couple, but individually as well ;-)