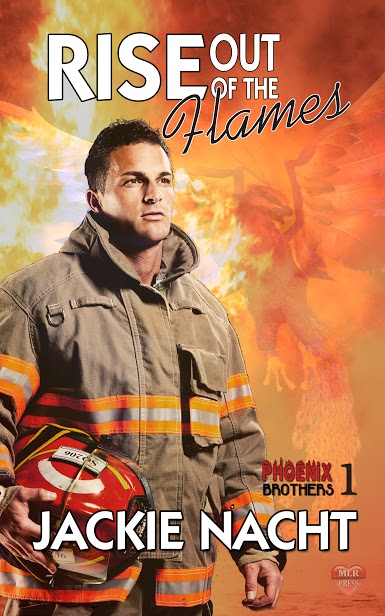 ARe - Amazon - Barnes and Noble

Blurb
Come and get saved by these phoenix firefighters brothers.Holden, a phoenix shifter, works at Rhodes Fire Department alongside his family. When he encounters his Sun, Rick, he's half naked on the fire escape and Holden knows he'll do anything to save Rick from the burning building. Even with the world knowing about paranormal beings, Holden has to figure out a way to tell Rick about himself. Phoenixes exist under the radar; keeping to small groups out of the limelight. Slight problem with maintaining secrets since it seems Rick may have unknowingly exposed himself to the phoenixes new enemy. How will Holden protect Rick with what happens when he goes up in flames?


Eighteen years ago
“Hurry, Holden.” Holden’s mother undid his seatbelt and carried him out of the car. He plopped down on the cold pavement in his footie pajamas, then Momma went running for the fire station, holding his hand.

“Jazzy, you want me to take Holden? Ed’s bad. He’s gonna need to burn out!” Uncle Niall called out to us.

Momma picked up the pace. “No, he’s going to find out sooner or later.”

Holden didn’t get to hear any more. They turned the corner and went straight into a room Holden hadn’t gone into with his little brothers. There was white tile along the walls and high amounts of steam. They turned the corner, and Holden saw several firefighters sitting, tired, in folding chairs as the showers rained down upon them. He searched for his dad, but couldn’t find him in the sea of sooty men.

“Jazz,” Holden heard his father rasp out, and his mother maneuvered him through the other firefighters. In the corner, where no water reached, lay Holden’s father. Three guys surrounded him, peeling away his destroyed gear.

His face was burned severely, and Holden clutched his momma’s hand. “Momma,” he whimpered out.

Momma knelt down in front of him. “It’s going to be okay, Holden. Daddy will be just fine. You need to see just how special you and your brothers are.”

Holden shook his head as his dad gasped. “Daddy!” Holden screamed as his dad’s destroyed body erupted into flames. Ash billowed all around the area. Holden cried out, trying to break free of his mom’s grip. My dad!

Holden covered his eyes as the ash around them made its way to Momma and him. He bowed his head down, crying, hiding as he waited for the ash to settle.

After a moment, Momma patted him on the head. “Holden, it’s fine now.” She scooped him up, resting him on her hip. Holden tucked his face into her shoulder and cried freely.

Holden wiped his face on Momma’s shirt before he turned and gazed down at the floor. Men were covering his dad with a blanket. His dad lay there, naked, burns completely gone from his face and hands. Ash began falling and covering him.

“Daddy?” Holden broke his hold and ran to kneel next to his father.

Daddy reached up and palmed Holden’s cheek. “Son, it’s time you found out how special your family line is.”


Present Day
There were plenty of things Rick Hills could have brought out with him on the fire escape besides his PC. A pair of pants was at the f*cking top of the list, since he stood there in his humping reindeer boxer briefs. And it was summer! Not only was he out of season, but everyone in a ten-block radius would know how scrawny he was under the baggy clothes he usually wore. No shirt, no socks, just obscene reindeers getting laid all over his boxers. Even in this dire situation, embarrassment surrounded him like the black smoke coming out of the building.

A pair of shoes was another item he could use right about now, but no, he was in the middle of an online raid, and thought he didn’t want to let his other gamers down. How the hell was he going to take down a boss when his building was going up in smoke? Then there was his work on it. Many irreplaceable photos. All the families counted on him to capture those special moments in their lives. Rick was in a sh*tty situation. God, did his computer back up automatically after he transferred the photos today? He hoped so, because his cameras were going to burn.
Oh, and one more thing, how in the world was he going to get down when the fire escape was f*cking broken? Sh*t, a phone would have been nice, too.
Neighbors came out to gaze up at the burning building and him. Jesus, of all the ways to go out. He had to do it in front of his nosy neighbor, ninety-year-old Mrs. Florence who loved to pinch his cheeks every time he passed. And no, it wasn’t the cheeks on his face.
Rick noticed several onlookers on their phone and prayed that one of them was actually talking to 9-1-1 instead of posting about what was happening on social media. A few snapped a shot, and he could only pray that come morning, his photo wouldn’t go viral.
Someone was underneath him, making an attempt to fix the broke-d*ck ladder. Rick should tell the guy it was no use, that kids had been using it to break into the apartments. The wolf-shifter neighbor, a floor beneath him, had taken it upon himself to make sure no one came in to steal his electronics again, shifting and tearing the ladder to pieces. At the time, Rick was grateful to the guy, since he was also a victim of the robbery, but now, it might just cost him his life.
Fear choked him, and Rick whipped his head around, seeking for an alternative escape. He couldn’t go back into his apartment; his place was already billowing with the thick black smoke. Sh*t. Panic settled in, and he began to tremble on the escape. Nothing. Absolutely nothing. There was no way out of this except to jump, and he was five floors up. The fall would kill him, for sure.
Sirens sounded in the distance, and Rick peered down the street to see emergency lights in the distance. Rick blew out a quivering breath. He might just see the light of day again.

Short, sexy and sweet— where a little love goes a long way.That’s the best way to describe Jackie Nacht’s stories.

She was introduced to M/M Romance through her sister, Stephani, and read it for years. Then, she thought it was time to put her own stories on paper. Jackie began writing short and sweet stories that ended with a happily ever after.

Thinking back to her own book addiction, where there were many nights Jackie stayed up way too late so she could read just one more chapter— yeah, right— Jackie decided to write short romances for young adults as well as adults. Hopefully, they will give high school and college students, or working men and women something they can read during their lunch hour, in between classes or just when they want to briefly get away from the daily stresses of everyday life.