New Release-Review & Excerpt: YOU OR NO ONE by Olivier Bosman (Doggerland Trilogy #1)

You Or No One
by Olivier Bosman

Is the world ready for an openly gay king and his prince consort?

Eric is shy, insecure and a member of one of the oldest aristocratic families in Europe.

When they meet in university sparks fly.

They say opposites attract, but when Joel discovers that Eric is the crown prince and future king of Doggerland, he starts having doubts.

They want to get married. They think their greatest battle will be convincing the King and the Prime Minister to give their consent. But estranged relatives coming out of the woodwork, intrusive tabloid press, and the traditional, stifling lifestyle of the aristocracy conspire against them.

Are Joel and Eric secure enough in themselves and each other to overcome a world which is not as tolerant as they thought? 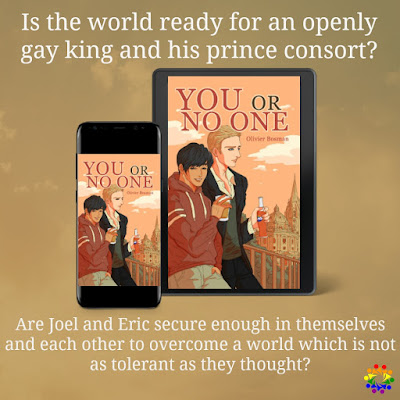 I got up early that morning. I entered the breakfast room five minutes after it opened. I wanted to beat Eric to it. I wanted to be the one to tell him to f*ck off when he pulled up a chair at my table. I sat at my table at five past, sipping coffee and nibbling on a croissant. I was engrossed by that croissant. How did they make them so delicious? I was busy dissecting the different pastry layers when a voice suddenly spoke to me.

"Mother never taught you not to play with your food?"

It was Eric, towering over me. His rosy face looked freshly scrubbed, his hair tightly combed, his white silk shirt freshly ironed, his beige chinos pressed. Before I could do anything to prevent it, he pulled up a chair and sat down before me.

"She’s gone to her friend’s hen do. Probably won’t see her again till Christmas."

He lifted his arm and clicked his fingers at the waiter. "Coffee, please. Black. And... um... eggs. Scrambled." Then he shooed the waiter away with his hand.

How rude, I thought. This was a side of Eric I hadn’t seen before.

"How was your little drive yesterday?" I made no attempt at hiding the bitterness in my voice.

"It was good. We drove along the coast and had a long good chat."

"About you, as it happens."

He sat up and cleared his throat. "I... um... I want to ask you a question. I wanted to ask you last night in your room. But you were sleeping."

He hesitated for a few beats. Then he blurted it out. "Would you like to marry me?"

Well! I don’t need to tell you that I was shocked. I gaped at him silently. Perplexed.

"This isn’t a proposal, you understand,” he added hurriedly. “I’m not asking you to marry me. Not yet. I can’t without the permission of my father and my government. But I’m asking you whether marrying me is something you would consider."

"Yes. I had a long chat about it with Petra. She said she talked to you last night. She likes you. She said you’d make a good partner for me."

"But we only talked for about ten minutes."

"Well, she’s a good judge of character. She saw the same good qualities in you as I did."

"Your confidence. Your self-assuredness."

"But I have no confidence."

"Of course you do. I mean, look at you. You’re poor, you’re Welsh, you’re not particularly good looking, and yet you’re sitting here in the smartest hotel in Brighton as if you had every right to do so."

"Wow! You really know how to sweep a boy off his feet!"

"No, you don’t understand. These are things that I like about you."

"That I’m not particularly good looking?"

"What I meant was..." He shook his head. "This conversation isn’t going at all the way I planned it. What I mean was that you’re grounded. You’re down to earth. You don’t care what people think of you. Otherwise you wouldn’t be wearing that."

"That hoodie. This is the Pavillion Hotel, not a hip-hop bar in Brooklyn."

"No. You don’t understand. I like that about you. I like that you snubbed the nice clothes I bought for you and chose to wear your council estate gear instead. I like that you come down for breakfast without even bothering to comb your hair. I like your ordinariness. Your earthiness. You’re a working class kid with the balls and intelligence to break out of your environment and compete with us rich kids. And you outshine us. Not with your clothes, or your wit, or your family name, but by being yourself. That’s what I like about you. And that’s what I want standing beside me when I’m king. Petra thinks so too, and she’s an excellent judge of character."

I was flabbergasted. Never had I felt so insulted and complimented at the same time! I’d read Petra wrong.

"What?" I’d long forgotten what the original question was. I was still reeling from his speech. You outshine us. That was the nicest thing anyone had ever said to me.

"Would you consider marrying me?" he said. "Or rather, what I’m asking is whether you’d be willing to be my right hand man. We’d be the first gay royal couple in history. We’d do all those things that you talked about in the car. Be ambassadors to gay rights and so forth. But it won’t be easy. We’ll be hated by many. There’ll be insults, ridicule, maybe even death threats. And that’s only if our marriage is approved by King and parliament, which will be a whole battle in itself. But one I’m willing to fight if you are by my side. So what do you think? Will you consider it? Will you be the next Prince Consort of Doggerland? Will you be my husband?"

I’m a sucker for romances involving members of royalty, so I naturally gravitated to this title.  You should know going in that as the first book of a trilogy, much is left open-ended and the main characters of Joel and Eric do not reach their HEA in this installment.  The story ends on a cliffhanger, and you’ll need to wait for the next book (or two) before you’ll find resolution.

I found Joel and Eric to be likable enough, though some of Eric’s quirks when he deals with other people (particularly those in service roles) are a little irritating—something Joel notes as well.  I thought that the progression of their relationship was not a natural one; there wasn’t enough relationship development, and they seemed to jump from a few hookups (because I wouldn’t really count them as true dates) to wanting to say “I do” without knowing hardly anything about each other.  It seems unlikely that Joel would be so willing to commit to a life as the consort of a prince—and eventually a king—without truly getting to know one another.

The writing didn’t flow as smoothly as I would have liked, having a bit of a choppy feel to it.  I also felt like we only got to know the characters on their surface; we didn’t really get an in-depth look at them which made it harder for me to connect and become invested in them as people.  They felt more hard-edged and some of the things they would say or do seemed out of character for them, even given as little as we get to know about them.

For all that though, I do wonder where things will go from the point the author leaves us hanging, since the situation Joel and Eric find themselves in is a sudden predicament and their future is even more uncertain than Eric had made it when he and Joel had their own confrontation.

You really won’t find a lot of physical intimacy detailed in this story, it’s more of a tell-after-the-fact then an in-the-moment thing, but the subject matter and adult language would still make this book one for readers 18+.  Also remember that being the first book of a trilogy with no resolution yet, you’ll want to commit to all three books before you start.

*this review is based on an advanced copy and only focuses on the story itself, not the technical aspects of the book*

Born to Dutch parents and raised in Colombia and England, I am a rootless wanderer with itchy feet. I've spent the last few years living and working in The Netherlands, Czech Republic, Sudan and Bulgaria, but I have every confidence that I will now finally be able to settle down among the olive groves of Andalucia.

I am an avid reader and film fan (in fact, my study is overflowing with my various dvd collections!)

I did an MA in creative writing for film and television at the University of Sheffield. After a failed attempt at making a career as a screenwriter, I turned to the theater and wrote and produced a play called ´Death Takes a Lover´ (which has since been turned into the first D.S.Billings Victorian Mystery). The play was performed on the London Fringe to great critical acclaim.

I am currently living in Spain where I make ends meet by teaching English. 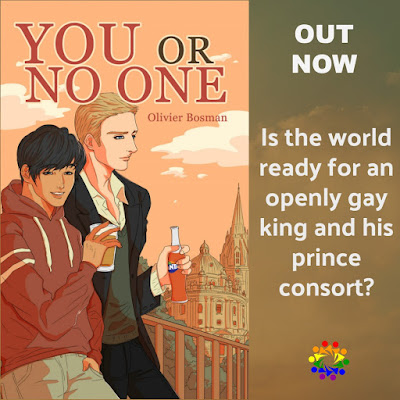