New Release-Excerpt & Giveaway: A VIGIL IN THE MOURNING by Hailey Turner (Soulbound IV) 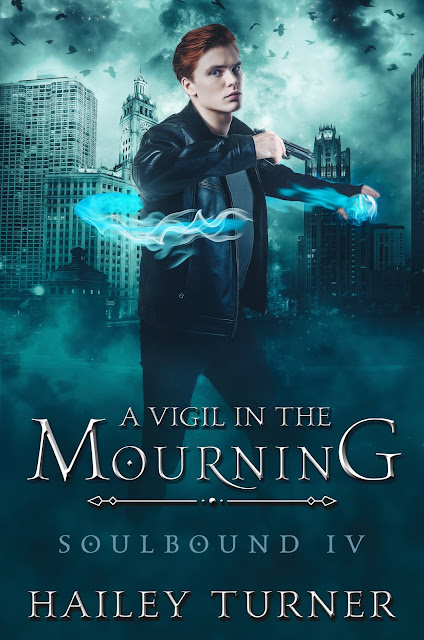 A Vigil in the Mourning
by Hailey Turner

The devil you know is never the one you should trust.

Special Agent Patrick Collins is dispatched to Chicago, chasing a lead on the Morrígan’s staff for the joint task force. Needing a cover for his presence in the Windy City, Patrick is ordered to investigate a politician running for mayor. In the lead up to election day, not everything is what it seems in a city where playing to win means appeasing the gods first and the electorate second.

But Chicago brings its own set of problems outside the case: a stand-offish local god pack, a missing immortal, and Patrick’s twin sister. Fighting Hannah and the Dominion Sect provides Patrick with a sinister reminder that some blood ties can never be cut.

Left behind in New York City, Jonothon de Vere finds himself targeted by hunters who will go through anyone to kill him—including the packs under his protection. With a bounty on his head, Jono is forced to make a choice that Patrick would never approve of. Doing so risks breaking the trust he’s built with the man he loves, but not acting will give the rival New York City god pack leverage Jono can’t afford to give up.

When Patrick and Jono reunite in Chicago, Patrick must confront the fraying of a relationship he’s come to rely on for his own sanity. But fixing their personal problems will have to wait—because Niflheim is clawing at the shores of Lake Michigan and the dead are hungry.

A Vigil in the Mourning is a 102k word m/m urban fantasy with a gay romantic subplot and a HFN ending. It is a direct sequel to A Crown of Iron & Silver. Reading the first book in the series would be helpful in enjoying this one.

Praise for A Vigil in the Mourning (Soulbound #4)

Patrick and Jono fight for their lives, tangling with Norse gods and monsters, while their relationship is strained by secrets and separation, in another exciting, deliciously angsty ride from Turner's Soulbound series. — Layla Reyne, author of the Fog City Trilogy

VIGIL IN MOURNING takes the Soulbound series a step further into stellar story crafting. A change in scenery for Patrick and a separation from his soulmate raises the stakes, and cliches are deftly avoided and expectations shattered as the central love story becomes fraught with tension. Each plot twist leaves the reader gasping and clinging to the pages, and I was not expecting that ending. Jono and Patrick lead an ensemble cast of characters that includes a snack obsessed dragon, a seer with a sarcasm problem, and gods that can't help but meddle. Patrick's snarktastic attitude leaves me laughing and terrified at the trouble he calls down.  — SJ Himes, bestselling author 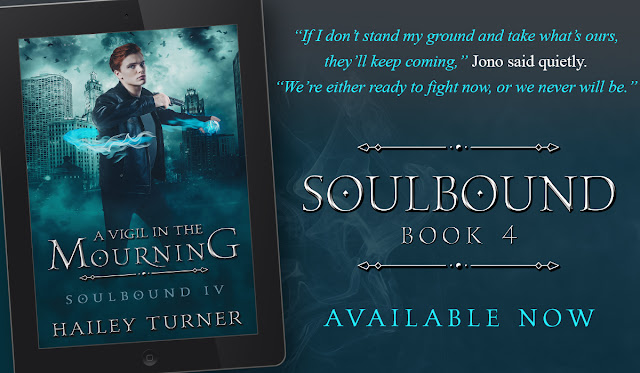 Jono shoved the mobile into his back pocket before opening the front door. He ducked his head against the cold wind and jogged to where everyone was gathered on the sidewalk. Slowing to a stop, he turned around and stared at the building.

“Is this really necessary?” Jono asked after a moment.

“Did you talk to our landlord?”

“Gargoyles are allowed to choose what building they want to live on and the owners have to let them. Most people consider their presence an asset to the property value,” Tiarnán said.
Jono eyed the trio of gargoyles sniffing about the front of the building, their stone bodies moving with a surprising smoothness as they searched for the best perches. “They eat pigeons and leave feathers everywhere.”

“Does that include trespassing werecreatures?” Marek wanted to know. 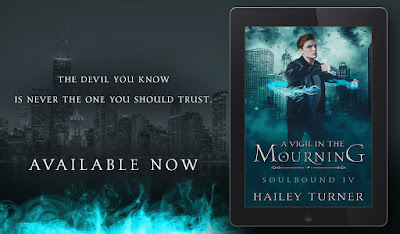 Hailey Turner is big city girl who spoils her cats rotten and has a demanding day job that she loves, but not as much as she loves writing. She's been writing since she was a young child and enjoys reading almost as much as creating a new story.

Newsletter:  You can keep up with Hailey's future projects by joining her newsletter, where you can instantly download several free short stories:  http://bit.ly/HaileyTurnerNews

Celebrate this exciting new installment in the SOULBOUND series with a giveaway! Two winners will receive any e-copy of a Hailey Turner book. Must be 18 to enter and win. Open Internationally. 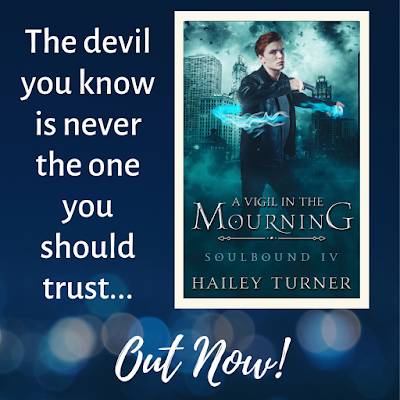