Review, Excerpt & Giveaway: THE ARTIST AND HIS ALPHA by Lisa Oliver-Includes Author Interview!

The Artist and His Alpha
Series: The Alpha and Omega Series
Author: Lisa Oliver
Book: Three
Each book is a self-contained story and can be read as a standalone. 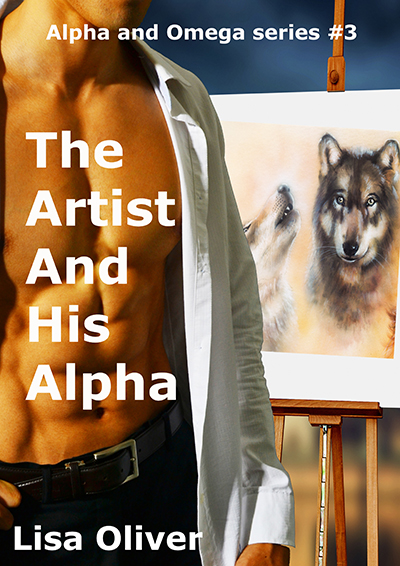 Caden Wolfe lives his life hiding from the world. As an Omega with a brute of an Alpha looking for him, he can’t afford to take any chances.  He is happy enough with his art, his one good friend Felix and his agent who adores his paintings. It’s a far cry from life on the streets and Caden is determined to keep working hard, and stay out of the spotlight. Staying away from all things wolf is easy enough in the city, until he meets the one man with the potential to blow his cover and his way of life, out of the water.
Sean Black has it all – a brother for pack, a home pack that is still supportive but far enough away not to interfere with his daily life, a good business, and men who clamor for his attention every night of the week. The last thing he wants or needs is a mate, but after a brief meeting with a gorgeous artist, he realizes his life will change, and not necessarily in a good way.
A misunderstanding leads to danger for Caden and Sean has to make a choice.  Can he give his Omega what he needs, or should he make sure he’s protected and then walk away? A rogue Alpha with an agenda of his own, a trap, and trouble from the council are just a few of the things this couple will have to contend with if they are ever to have their HEA. 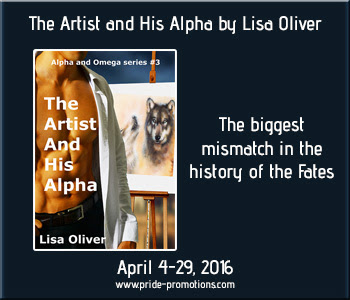 Excerpt:
“Holy sh*t, he has a gun. Caden, for f*ck’s sake don’t shoot!”
Sean heard Felix yell and he damn near pushed Liam off the fire escape, leaping up the last of the stairs. He could understand how Felix would want to talk quickly, especially if a gun was involved, but he had to see Caden for himself. As he stood on a rickety ledge he was momentarily stunned by the vision in front of him. A huge lit space littered with canvases spoke of hard work, dedication, passion for art and an apparent disregard for mess. And in front of it all stood Caden – locked, loaded and ready for bear.
The young man looked even better than Sean remembered. His slim, pale torso gleamed under the light, his unruly mop of straight blond hair falling just over the top of one eye. All Caden appeared to be wearing was a pair of jeans that hung low on his hips – a truly sexy picture. But it was the confident way Caden held the gun in his hands, and the unflinching glare in his eyes, that touched Sean’s heart. Felix had been right about one thing. Caden was determined to defend his home, and he looked more than capable of doing it. Damn, if that idea didn’t slam Sean in the groin and hang on.
“What are you doing here, Felix?” Caden’s voice held traces of nervousness that wouldn’t be noticed by human ears, but Sean noticed that the hands holding the gun didn’t waver.
“I was worried about you,” Felix called out, stepping closer to the glass, his hands spread to show he was unarmed. “We all were. You wouldn’t answer your door; you weren’t taking my calls. I had to know you were all right. We’re friends, Caden, I thought you trusted me. Now please, let us in. This damn ledge is f*cking unsafe and you know I’m scared of heights.”
Caden held his glare for a long minute, and Sean wasn’t sure the young man would ever move. But then he carefully raised his weapon, removed the magazine, which he tucked in his back pocket, and then walked over to rest the gun against the wall.  Only then did he come towards the large panes of glass, releasing a latch, which Sean realized was actually a door latch. What he had mistaken for windows doubled as large sliding doors.
Once all three men were inside of what was a huge space, Caden seemed unsure of himself. “I know we’re friends,” he said to Felix hesitantly – scared, but apparently determined to defend his actions. “I’m not doing anything wrong.” His eyes seemed to catch Sean’s automatically and Sean was shocked to see they were full of fear again. “I’m an adult. This is my place, my territory. I’m not intruding on anyone’s space. I have a right to be here.”
Sean realized in that instant that Caden’s immediate fear had a name – the Black Brothers - and damn, if that didn’t make him feel sick. He and Liam were full-blown Alpha wolves, and his little Omega must have thought that they had a pack, or at least a right to the territory he lived in. No wonder the poor guy had locked himself in and refused to talk to anyone. He was terrified of losing his home and possibly his life.
Felix looked confused. “No one said you didn’t have any right to be here. This is your home, bought and paid for. No one can take it away from you so long as you pay your taxes, and your trust does that for you.”
“Then why did you bring them?” Caden hadn’t stopped looking at Sean, but clearly Liam was included in the ‘them’ comment as well. “They know what I’m talking about. Why are they here, if not to beat me, torture me, rape me and then kick me out of my home? That’s what men like them do. What are they doing here?”

It's been a while since I've read a shifter book, and this was a great one to get me back into it.  It can definitely be read as a standalone-I haven't read anything else in the series and it was just fine on it's own.  I'm always keen to read about the alpha/omega dynamic and The Artist and His Alpha does a really good job at showing the extremes in this story.

I absolutely loved Caden's character.  He was so brave to strike out on his own, escaping a horrible alpha and what really was a poisonous pack.  He exudes strength and independence, and is willing to fight for what he's rightfully earned on his own.  Sean was a bit harder for me to like, at least until the last quarter or so of the story.  He kind of came off as a little aloof and like he just expected things since he never really had to work for any guy's attention before...though he is still irresistibly drawn to Caden.  Sean just didn't seem like he was working as hard toward their relationship as he should be.

The story is paced well, and it kept my interest all the way through.  The cast of supporting characters was strong, and I'm actually hoping we'll get to see a story for Sean's brother Liam with Felix.  Sean and Liam's father, Ian, is a really great character, very compassionate and understanding and he is so supportive not only of his sons but of Caden as well.

Fans of M/M shifter romance will enjoy The Artist and His Alpha, and I do recommend it to those 18+ for adult language and M/M sexual content.  This was a 3.5-star read for me, and I'm looking forward to reading more by this author in the future.

Lisa Oliver had been writing non-fiction books for years when visions of half dressed, buff men started invading her dreams.  Unable to resist the lure of her stories, Lisa decided to switch to fiction books, and now stories about her men clamor to get out from under her fingertips.
When Lisa is not writing, she is usually reading with a cup of tea always at hand. Her grown children and grandchildren sometimes try and pry her away from the computer and have found that the best way to do it, is to promise her chocolate.  Lisa will do anything for chocolate.
Lisa loves to hear from her readers and other writers.  You can friend her on Facebook (http://www.facebook.com/lisaoliverauthor), catch up on what’s happening at her blog (http://www.supernaturalsmut.com) or email her directly at yoursintuitively@gmail.com.

Today I’m very lucky to be interviewing Lisa Oliver, author of The Artist and His Alpha, the third book in the Alpha and Omega series. (Can be read as a standalone.)

Hi Lisa, thank you for agreeing to this interview. Tell us a little about yourself, your background, and your current book.

Hello and thank you for having me here today.  I’m a full time writer and author of the Cloverleah Pack series, the Bound and Bonded series, Stockton Wolves, Shifter’s Uprising, and of course The Alpha and Omega series. The A&O series differs from my other books because they are all standalones and have no overlapping characters.

In this book, TAAHA, I was looking at the ideas of what it would take to have a young man, with few friends, who lives in fear for his life every time he steps out of the door, willingly forge a connection with another wolf. An Alpha wolf, which is the type he despises. Caden has a lot of growing to do in this book, but then Sean, his Alpha does as well. While I have always adored the true mate trope, I don’t believe in insta-love, so these two had to work for their HEA.
I have paid attention to reviewers, especially when they criticize my style, or the words I use. I had a lot of problems with my first couple of books, because I am a Brit, who lives in NZ and who writes stories set in the USA.  I now have a dedicated team of beta readers who help improve the quality of my stories.

I like for my titles to set the tone for my stories. Usually a phrase will just come to me while I am thinking about my characters, and I have learned to go with my gut instinct in that sort of situation.

I am always on the lookout for new authors, especially in the M/M paranormal genre. New to me, just recently I have been reading Jordan L. Hawk, Hannah Walker and Carol Lynne.

I adore the writing process, seeing the stories in my head come to life on the page. It’s being an author I have more trouble with – the editing, promotions and things like that. But writing itself is an addiction to me.

I am a chocoholic, so normally I would just say chocolate. But my kids reminded me there is more to life (sacrilege) so I’ll say cups of tea, Big Macs, Steak and salad, and Chocolate.