Review & Giveaway: THE COLOR OF SUMMER by Anna Martin 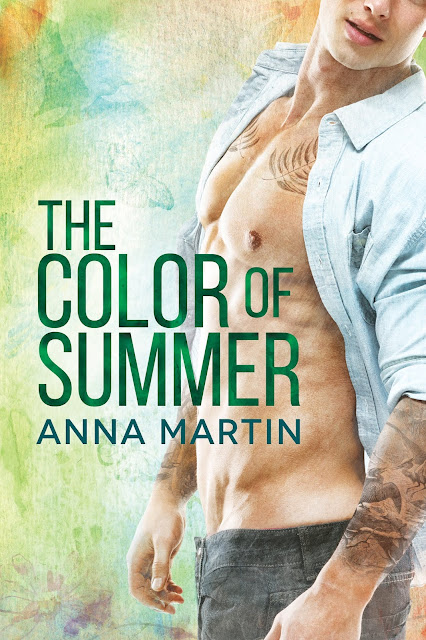 Reconnecting with Tyler helps Max settle back in, and it also leads to attraction. But when he tries to explore that connection at the grand opening of his tattoo studio—by kissing Tyler—awkwardness ensues. Max wants more, but has he misread Tyler’s signals?

As a single father raising a six-year-old daughter, Tyler doesn’t have much time to date. He’s ignored his attraction to men for years, but he can’t stop thinking about the kiss he shared with Max. If he can handle the complications of dating in a small town and the possible consequences to his career, this romance could blossom with all the colors of summer.

Presented as a best friend’s brother romance, The Color of Summer actually does not have that feel at all while you’re reading—it felt more like a “former friends to more” story instead.  I think it felt that way to me because Max’s best friend Shaun actually does not have a lot of page time in the book.  The story is more centered on Max and Tyler’s relationship development, with a touch of drama thrown in maybe two-thirds of the way in to provide a touch of excitement.

Max’s character was my favorite of the two leads; I liked how responsible and easygoing he was, and his commitment to getting his business off the ground.  He’s the kind of guy who doesn’t really do serious commitment; casual is more his thing…which is the opposite of Tyler, who isn’t into the hookup/casual scene.  Tyler’s a single father, hot cop, and an upstanding member of his community.  He gets to go through some self-discovery when he realizes his attraction to Max, which didn’t carry much angst at all.

Actually, the overall story is pretty angst-free, with the two of them falling into a mostly comfortable relationship.  Though Tyler has concerns about coming out, those are really not brought to the forefront in this story.  The bit of drama that is introduced adds tension and suspense, but mostly acts as a device to bring Max and Tyler closer.

Max and Tyler make a good pair, though I didn’t quite feel that “click” between them.  I also wasn’t a fan of Max allowing his mom to influence his decisions regarding his relationship at one point, especially since it didn’t feel like she had a full grasp on the progression of things between Max and Tyler up to that point.  Tyler’s daughter was cute, though she did come across as older than she was.  I liked how she and Max formed their own bond naturally, and how he knew he needed to take that into consideration in his relationship with Tyler.

The Color of Summer was a 3.5-star read for me; it did feel longer than it was (and a bit longer than it needed to be), but still was a good read.  This story is meant for readers 18+ for adult language and some sexual content.