New Release with Excerpt: SURVIVING THE SHADOWS by Miranda Turner (The Bearer of Truth #2) 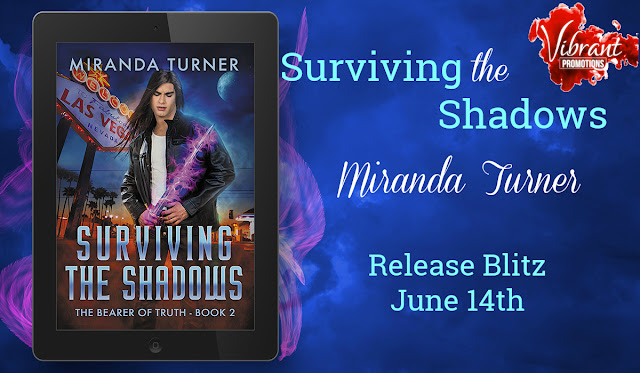 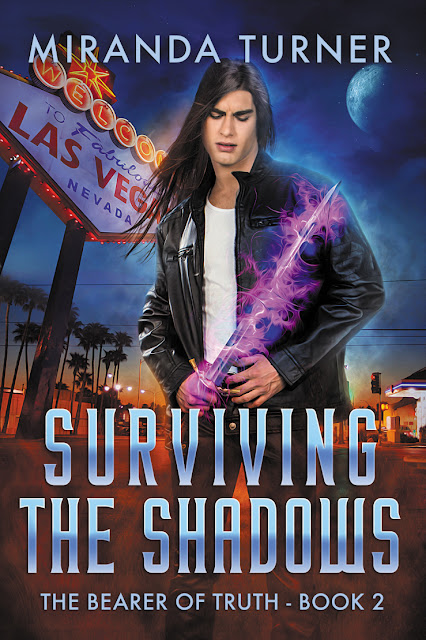 Gabriel has been gone longer than predicted, and Evander is growing increasingly worried each day that passes without his return. Confounded by their leaders’ lack of answers, Evander and the team begin to fear the worst.


In the midst of fruitlessly searching Miami for clues to the Daemon Abaddon’s whereabouts, Evander begins to have disturbingly vivid dreams. With a little help from a newly-returned and empty-handed Michael and Barabbas, Evander discovers Gabriel has been calling out for help across their nascent bond. With a little backup from an unlikely source, they set off to rescue Gabriel from the depths of the Underworld.


Gabriel is old friends with torture, and his captors haven’t been gentle. Despite growing weaker every day, Gabriel resolves to survive long enough for rescue, or to die fighting, until a Dark Seer begins to dredge up the terror of Gabriel’s horrific childhood, threatening to destroy his mind and soul. Nearing the end, Gabriel manages a last-ditch effort to contact help, reaching out to Evander in his dreams.


Against all odds, Evander and the team fight through the Underworld to reach Gabriel and come face to face with mortality. Sacrifices made for the bonds of brotherhood nearly break them, and Gabriel learns the hard way that embracing the darkness while fighting for the light may be the only way to survive.


From the underbelly of Reno to the glitz and glam of Vegas, Gabriel, Evander, and the men they call family will be tested, and the final confrontation with Gabriel’s maker may be the end of everything they hold dear. 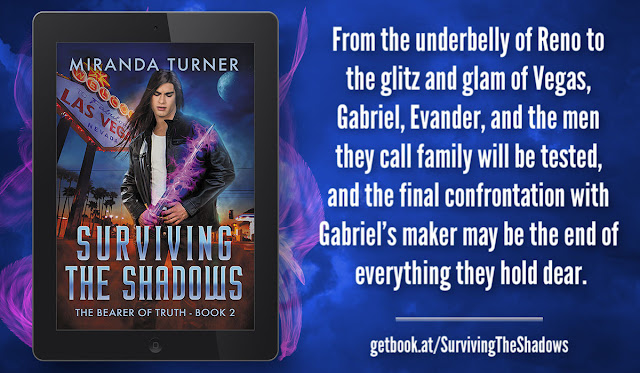 
EVANDER WOKE WITH A GASP. What the hell was that? He’d dreamt of Gabriel before, but never like that. It felt so real. The images were burned into his brain. Gabriel in chains, the elegantly muscled body he’d touched and explored so thin it almost looked like his wrists could just slip out of the cuffs, his once-vivid eyes that changed color from blue to silver to purple were a flat gray, and his vibrant spirit dulled as if it almost had been snuffed out. The listless sadness rolled off him in waves, the absence of hope, and the putrid smell somehow invaded Evander’s senses even while dreaming. How was it possible?


The strangest part had been when Gabriel seemed to know he was there. He had looked right at Evander and whispered his name with a desperation that was frightening in its intensity. Evander had felt it pull at his heart in an all too real and painful way, creating a need in him to find Gabriel and save him. Especially after seeing the dark , malevolent presence hovering over Gabriel. It was without form, faceless, but Evander could feel the noxious evil that rolled off it.


Evander had already been worried about Gabriel. He had been gone a lot longer than anyone, including Gabriel, had thought he would be. His team of Bellators, those who fight for the Light on Earth, had moved on to Miami like Gabriel had instructed and done some low-key investigation into the town’s leadership, enough to know Abaddon— Gabriel’s father and the Daemon they were currently searching for— was not there. 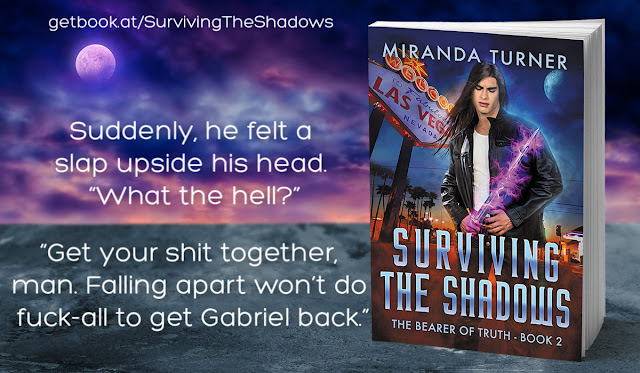 Miranda Turner is a single mom of eight living outside a small, hippie town in the middle of Ohio. She’s surrounded by children, chickens, and one temperamental editor kitty who is silently judging her on a daily basis. She is a voracious reader and an editor who decided she had different stories to tell. She firmly believes a happily ever after is there for everyone, but she likes to make her characters earn it.
Facebook - Instagram - Email