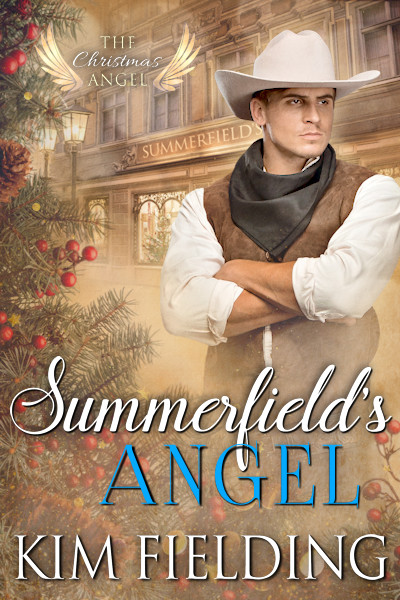 After the hard winter of 1888 ended Alby Boyle’s work as a Nebraska ranch hand, he returned to New York City in search of his long-lost family. His mother and brothers are nowhere to be found, however, and after Alby’s years of absence, Five Corners no longer feels like home. His prospects seem as dim as the nighttime alleys.

When Alby pauses to admire an angel ornament in a department store window’s Christmas display, he meets Xeno Varnham-Summerfield. Wealthy, handsome, and enthusiastic, Xeno brings Alby some temporary cheer. But for Alby to achieve his dreams of love and a real home, well, that may take a bit of holiday magic.

The second in The Christmas Angel series, and Kim Fielding gives us another well-researched, touching historical romance with that little touch of magical from the angel.  Alby and Xeno are another set of opposites attracting, thankfully without much angst.  I found the setting in New York of the 1880’s to be pretty interesting, a definite contrast to the New York of today.

I loved the character of Alby.  He’s a strong, responsible man and I while I was saddened by the way his childhood turned out, it really wound up being the best thing for him.  He’s a toughened ranch hand with hardly anything to his name, but still makes the best of things.  Xeno on the other hand comes from wealth, able to travel the world and have all his needs met many times over.  Their chance meeting and subsequent encounters slowly lead to more, and though this story is not too long, I never thought their relationship felt rushed at all.

While historical settings for M/M romance can be tricky due to the taboo nature of two men being together (even illegal depending on how far back the story is set), I’m really glad that is handled in such a way to still give us a plausible solution that leads to a happy, realistic ending.

I truly enjoyed this story, and thought Alby and Xeno were a great match.  Even though they are not of the same station in society, they complement each other well like all great opposites attract couples usually do.  Summerfield’s Angel was a 4.5-star read for me, and while this is just the second book in the series that I’ve read so far, I’m glad I’m reading them in order to see how things evolve with the angel from the start.  This book is meant for readers 18+ for some adult language and sexual content.

Kim Fielding is the bestselling author of numerous m/m romance novels, novellas, and short stories. Like Kim herself, her work is eclectic, spanning genres such as contemporary, fantasy, paranormal, and historical. Her stories are set in alternate worlds, in 15th century Bosnia, in modern-day Oregon. Her heroes are hipster architect werewolves, housekeepers, maimed giants, and conflicted graduate students. They’re usually flawed, they often encounter terrible obstacles, but they always find love.
Kim’s novel Brute was the 2013 Rainbow Award Winner for Best Gay Fantasy and tied for fourth place for Best Gay Novel.

After having migrated back and forth across the western two-thirds of the United States, Kim calls the boring part of California home. She lives there with her husband, her two daughters, and her day job as a university professor, but escapes as often as possible via car, train, plane, or boat. This may explain why her characters often seem to be in transit as well. She dreams of traveling and writing full-time.