New Release-Excerpt: SHADOWING THE LIGHT by Miranda Turner (The Bearer of Truth #1) 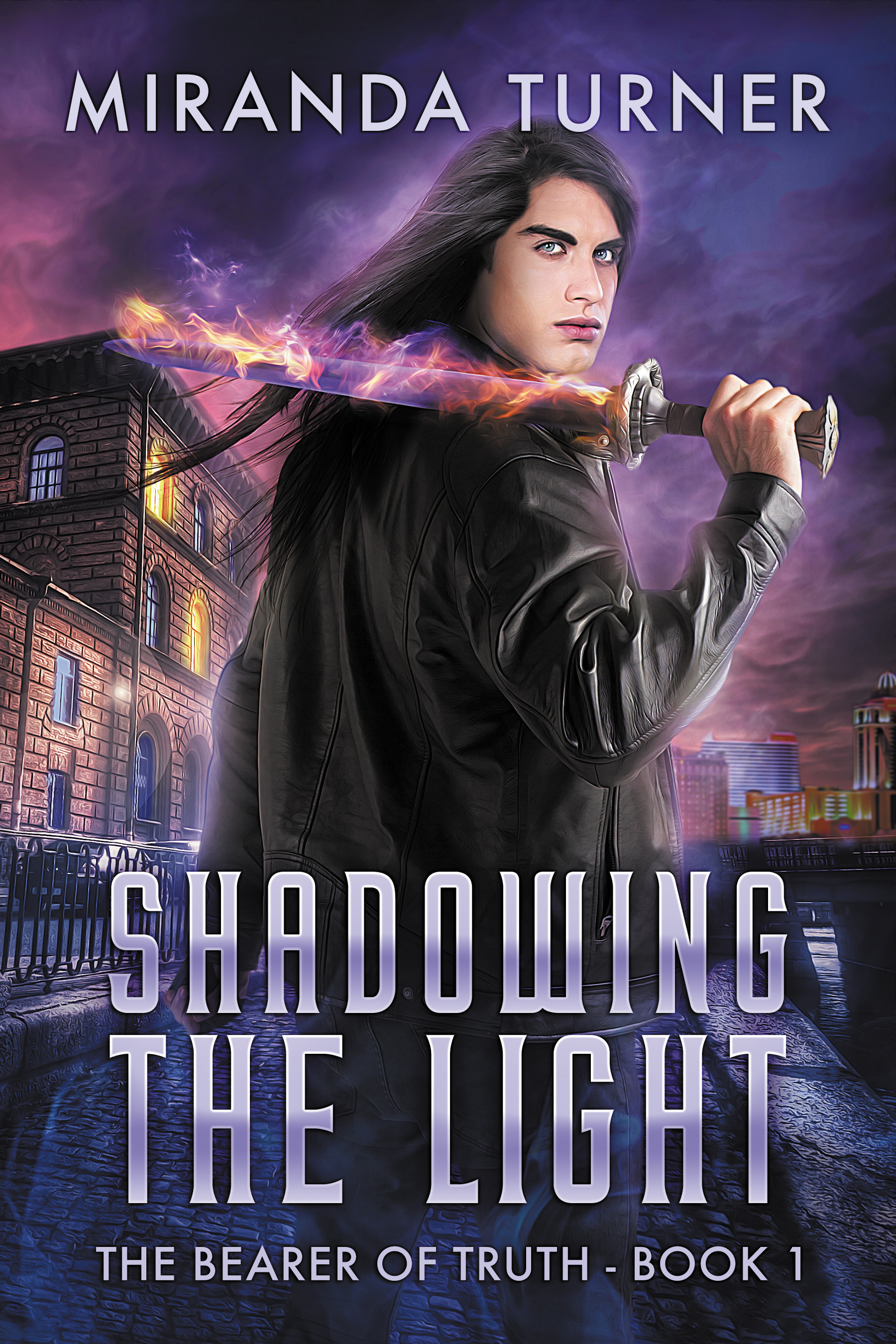 “Everybody has their own agenda. Everybody.”

Hunted for the unique blood that runs through his veins, half-angel, half-demon Gabriel Sinclair lives without expectations. On the run from forces on both sides of an ancient conflict, he searches for strength and peace in a world which only seeks to use him.

When Gabriel is forced to stop running, assigned a team—and a mate—he doesn’t want, and reluctantly tasked with a mission, he must overcome obstacles both real and imagined. Otherwise, the world as he knows it, and the mate he’s reluctantly come to care for, may cease to exist.

“I will do as the Creator bids me. Always.”

Evander Ryan is special, and he knows it. The final handcrafted immortal warrior for the light, he is the Creator’s greatest masterpiece. For fifty-eight years, he’s lived his life in black and white, coddled by his Maker, while leading his team to countless victories against their enemies. Those fights were easy. Working with a new, uncooperative mate who sees the world in shades of gray? Less so.

As Evander’s eyes are opened to the existence of light warriors who are not good, dark warriors who are, and the wider world of supernatural beings, he learns nothing is as he thought it was, and his mate isn’t who he thought he was either. Maybe there’s something to be said for not always following the rules. . .

Gabriel sighed. Every f*cking time he tried to relax something went wrong. Why did the drama always find him? “Do you need help?”

“If you would be so kind as to get me out of here without them seeing me, I would be very grateful.”

“Sure, man. I’ll make sure they don’t notice you. See the doorway right there?” Dubhlainn nodded. “That’s the back exit. I’ll provide a distraction, you get out there. I’ll meet you four alleyways to the left in fifteen minutes.” Gabriel looked over his shoulder at the two gigantic fae warriors Dubhlainn was running from. “Uh, maybe twenty.

“Go…now. Keep your head down,” Gabriel commanded him. Then he swung around off his stool and affected a drunken stumble, pulling a dollar out of his pocket. Walking across the room, he acted like he was heading for the jukebox on the other side of the bar. As he drew even with the two fae, he stuck the dollar in their face, asking them if they had change. As he asked, he swayed too far forward, losing his balance and taking the two large men down.

“Get. Off.” The warriors began trying to push Gabriel off them, but he kept stumbling and falling back onto them, clinging like a barnacle to their bodies to keep them from getting up. After a few minutes of struggling, they managed to extricate themselves from Gabriel and made a mad dash for the back door.

Smiling to himself, Gabriel stood up. Steady on his feet, he slinked out after them, intending to make sure his new friend got away safely.

Staying far enough behind them that they wouldn’t notice him, Gabriel followed the warriors through the alleyways. They kept trying to scent the air, but with all the scents in city alleys, it was almost impossible to single out any one being unless you were a were of some sort. Eventually, they turned the wrong way to continue their search, and Gabriel made his way to the meeting spot.

When he arrived, Dubhlainn wasn’t alone. “F*ck.” Why the hell was Michael there? “Was this one of your stupid f*cking tests?” Gabriel asked.

“No, Gabriel. I was here to find you and saw you providing a distraction for the fae. I followed him when he left. I assure you, I’ve never met him before in my life.”

Gabriel rolled his eyes. “Way to be creepy, Michael. Dubhlainn, are you okay?”

“I am well, Gabriel. I will take my leave of you now. I would like to offer a token of my appreciation.” Bowing at the waist, Dubhlainn handed Gabriel a gold coin the likes of which he’d never seen. “Do not lose it. Its worth is beyond anything money can buy.”

Gabriel and Michael stared down at the coin. “What’s it fo…” Gabriel looked up only to realize Dubhlainn had disappeared.

“What the f*ck?” Gabriel spun around, searching for any sign Dubhlainn hadn’t been a figment of his imagination. Well, the coin he now slipped into his pocket was real enough.

“I must say, I do meet the most interesting people when I’m with you.” Michael chuckled.

Miranda Turner is a single mom of eight living outside a small, hippie town in the middle of Ohio. She's surrounded by children, chickens, and one temperamental editor kitty who is silently judging her on a daily basis. She is a voracious reader and an editor who decided she had different stories to tell. She firmly believes a happily ever after is there for everyone, but she likes to make her characters earn it.