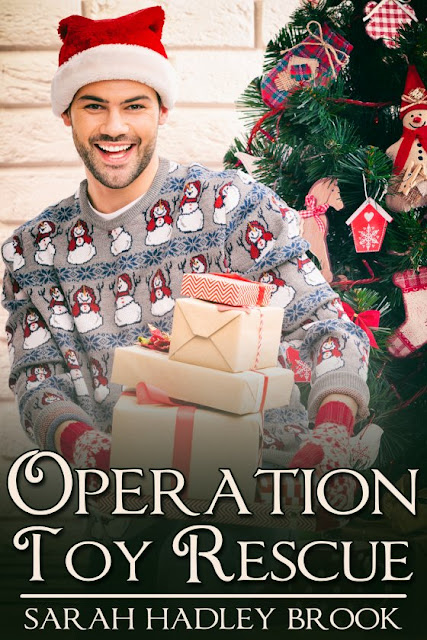 When Jules Evergreen lands in trouble at the North Pole and gets shipped off to Snow Hope Island for ninety days, he never expects to take up the cause of the forgotten toys waiting for new homes. Falling for his new boss is not on the agenda either, but his heart has other ideas.

Felix Winterson has grown up on Snow Hope Island and now runs the place. He isn’t thrilled when party boy Jules arrives, and Felix tries hard to ignore the man’s charms. He has other problems, anyway. For years he’s tried to get Santa to look at the growing inventory of damaged toys in the warehouse, to no avail.

When Jules comes up with a plan to save the toys, the men find themselves working closely together. As Christmas Eve looms, there’s a lot at stake. Can they save Snow Hope, convince Santa to rescue the toys, and fall in love all at the same time?

He was surprised that no one else was in the building yet. Unless they were upstairs in the loft, or locked away in an office. He thought he’d seen Eve’s coat hanging from a peg up front.

Jules opened the laptop and logged in, ready to get started. He really wanted to take that trip to the warehouse with Felix and the quicker he finished logging things in, the quicker that could happen. As he carefully opened a rather large box, he heard a door open and turned to see Felix, Eve, and Zuzu hurry out of Felix’s office. All wore a look of panic and his heart jumped.

“The Big Guy is coming for a visit three days before Christmas! We just found out. He never does this. Never, Jules.” Her voice rose as she spilled the news.

Jules glanced at Felix and caught his eye, holding it for a moment. “Isn’t Santa coming a good thing?” he asked, confused.

“We don’t know. He never does this. Never,” Eve reiterated.

“She’s right. He doesn’t. What if he wants to make major changes? Or move us to the North Pole?” Felix asked.

Jules crinkled his brow. In his mind, moving to the North Pole would be great. Felix would be closer to Jules. “You don’t want to live at the North Pole?”

All three of them looked at him in shock, their mouths gaping open.

Okay, I’ll give them that. But there were good things, too.

“But you’d be closer to ...” he flicked his gaze to Felix and felt his cheeks heat up. “The main operation,” he finished lamely.

“But we like it here. Our island is beautiful and we’re like a family. What if we’re torn apart?”

“You don’t know, Jules,” Eve broke in. “Maybe he thinks we don’t do enough to help these toys.”

Felix was vigorously nodding his agreement, so Jules shut his mouth and sat down in front of his laptop, considering the possibilities. He finally glanced back up, his lips curving up into a small smile as he eyed all three. “Then I guess there’s only one thing to do, guys. We need to show Santa how important the island is to children all over the globe.”

“How do we do that?” Eve asked quietly, her brow furrowed.

“By developing a kick ass plan to get these ‘inadequate toys’ into the hands of kids,” he explained, using air quotes. It was really just expanding what he and Felix had talked about last night. But calling it a plan made it feel more real. More promising.

Again, they gaped at him. Well, all but Felix. He was grinning. Happiness filled Jules’s chest and his heart raced as he grinned back, warmth spreading through him. Their gazes held and Jules felt like Felix was peering inside of him. Like he was seeing the real Jules. Not the guy that always screwed up. Not the guy that only thought of himself. But the one that finally -- finally -- wanted to do something worthy. Something that would bring others joy.

“Jules is right. We need to work together to show Santa we can handle the responsibility of taking care of the toys on this island. To prepare them for new homes. To convince him to take them with him on Christmas Eve.” Felix straightened his shoulders as determination flitted across his face and hope flashed in his eyes.

Jules couldn’t look away. The man was beautiful in every way.

If you’re looking for a cute, lighthearted holiday romance in a unique setting with just the lightest touch of spice, you’ll find it here in Operation Toy Rescue.  Given the short length of the story, don’t expect a huge amount of depth, but even so it’s still a fun, complete tale with engaging characters that intersperses a romance with the inner workings of the North Pole—focusing particularly on those toys that aren’t perfect and what happens to them.

Jules and Felix are adorable together, not quite a love at first sight but definitely a quick attraction.  I would have loved to read a longer version of this story since I really liked their characters.  Their relationship was sweet and believable even with the story being a quick one.

Operation Toy Rescue is a fun quickie escape holiday romance that was a 3.5-star read for me.  It can be read in probably a couple of hours, and is meant for readers 18+.  It's hard for me to say much more without giving  away too much of the story, just know if you're a fan of short M/M holiday romances, you'll want to check this one out.