“It’s not all about serving coffee and typing reports.”


Working for a secret organisation specialising in alien cover-ups, Connor Smith is no stranger to the abnormal or dangerous. His love life on the other hand… not so exciting. Until he reluctantly agrees to a blind date and meets the perfect bloke, Jason.


Things are finally falling into place for Connor, so of course that’s when he attracts an alien stalker.


Noah Jones, ex-alien, has been stranded on Earth and forced to live as a human since 1648. Alone and detached from the world around him, Noah has spent centuries observing and recording humankind. In all that time, he’s only experienced a connection with a human once… until he finds Connor.


Even knowing Connor is in a relationship, Noah can’t ignore their potential bond, or stay away.


While dealing with missing alien artefacts, a dangerous and shadowy group of collectors, and the ever-present Noah, Connor finds his orderly life crumbling around him. At least he still has the perfect boyfriend…


When Noah goes missing, Connor is forced to face the feelings growing between them and the mounting evidence that Jason isn’t who he says he is…


Blaine is giving away two sets of "A Triad in Three Acts" & "Oren's Right" with this tour – enter via Rafflecopter: The Dross Woods, four-bloody-something in the morning, hunting for six-armed, two-legged white creatures.


Agent Connor Smith, personal assistant of Chief Security Lieutenant Natalie Tallis of Primrose UK, yawned. The lingering mist clung to his ankles as he tightened the straps of his field gear. He took his tranq out of its holster and flicked his torch on. The dense, tall trees hampered visibility, and the smattering of shrubs didn’t help, either. The path, at least, was wide enough for two.


“How many were there again?” Agent Simpson, team Alpha’s leader, asked. His dark, bald head gleamed in the early dawn as he moved to stand next to Connor.


“Ten, I think.” Or eleven. Connor hadn’t been awake enough to pick up everything during the interview with the Cleaton brothers, two aging sheep farmers, who had called it in. Why have a sheep farm so close to this vast and dense piece of forest? It was asking for trouble.


“They kept them in the stables, right? So, what happened?”


“Broke out,” Connor said as he trailed into the woods after Simpson. Though Connor outranked the stocky but agile team leader, Simpson had at least a decade of field experience on him. Simpson’s torch lit up the uneven, knobby-rooted ground, and Connor used his to search the shrubbery next to the path. He wished he’d brought an extra coffee, because he was not awake enough for this. Hopefully, the pale colour of the creatures made them easier to spot.


“Have you seen the thing they called stables? It’s nothing more than a rickety old shed. Even one-armed creatures would have had no problem breaking out, let alone these... Noren, I think the brothers called them.”


“All I understood was that we’re here to catch us some aliens.” Simpson veered left, following the whimsical bend in the path, and looked back. “It was a late night.”


“Right, you were chasing another missing artefact. Lieutenant Tallis filled me in. File’s probably making its way to my desk as we speak.” Connor squinted, aiming his torch at the shrubbery to his left. A mix of red, yellow, and purple flowers brought some colour to the otherwise dreary looking forest. “It’s the eighth time this has happened. It’s becoming a problem.”


“Chest height or about. Why? Spot something?” Connor pointed his torch along Simpson’s.


The shrubs shuddered and shook until Simpson stepped forward. A twig snapped, followed by meowing. A cat. Just a cat.


Connor shrugged at Simpson and they moved forward again.

Somewhere a shout rang out: a high-pitched screech that caused goose bumps.


“One down!” someone called through the commlink—team Bravo’s Forente or Briers, Connor guessed. “There are at least two others here.”


“That way,” Simpson said, pointing to their right, onto a narrow path overgrown with creepers.


Connor nodded, but Simpson had already turned away.


Step by step, they followed the narrow path, the darkness only broken by the light of their torches. They were hampered by the creepers as they moved along—listening, stopping, and listening again—as well as having to push low branches out of their way every other step.


One by one, more teams called in their catches.


“They seem to like sheep,” Forente commented after his first catch. “I heard one bleat, and the next thing we know, one of those Noren is coming right at us.”


“How many is that now?” Connor eyed the shrubbery in front of him, squinting as he pointed the torch at it. Eerie how dark a forest could be at daybreak. He preferred the smell of fresh moss to the damp, woodsy smell that now hung around him.


So, three to go, and he and Simpson had yet to run into any.


Something rustled behind them, and Connor turned, aiming his tranq. He hoped it wasn’t another cat. More rustling, but no movement in the shrubs. The foliage was denser here—they must have reached the middle of the woods by now.

Satisfied a Noren wasn't stalking them, Connor went to catch up with Simpson. when a sudden crunching of leaves to his right stopped him again. Something whitish moved behind a tree, too large to be a rabbit. He wished he’d paid more attention when Tallis had told them what to look for. Not that she’d been any more awake than he was. Simpson wasn’t the only one who’d been working late. The—


Another crunch, nowhere near, though. If there were two Noren around, he'd need Simpson. He tapped the commlink. “Simpson?”


“That was me. The path circles back onto itself.”


That was a relief. “There’s one behind a tree in front of me.”


“Good idea.” Then he remembered the comment about the sheep. “Wait. You don’t have to. Draw it out, bleat if you have to. All I need is a clear shot. I can’t take a shot as long as it’s hiding behind that tree,” Connor said, keeping an eye on the tree the Noren hid behind. He hoped it was just the one, even though they didn’t seem violent towards humans.


Simpson’s imitation of a sheep sounded nothing like the real thing, yet the Noren thought it genuine enough, since it came out from behind the tree, straight into the dense shrubbery next to it.


“Bugger.” Connor tracked the movement, but the shrubbery blocked his view. “I don’t have a shot. It fled right into the bushes.”


Simpson didn’t reply. Instead, he made his way around Connor, judging from the flashes of torchlight jumping around, and repeated his sheep imitation.


The leaves shuddered, and Connor narrowed his eyes, hoping to get a clear shot.


Simpson bleated again, and this time the Noren came running out of the shrubbery. Connor aimed and pulled the trigger. The Noren went down hard. Hit in one. He knelt next to the creature, taking the cuffs out.


“Nice shot, Smith,” Simpson said when he reached them.


“Thanks.” Connor cuffed all three sets of arms. It seemed like overkill, but he knew better than to take any risks. He was about to activate his earpiece to ask how many were still on the loose when a shrill whistle sounded, calling them back.


“Well,” Simpson said as he helped Connor pick the Noren up, “I guess that’s that.” 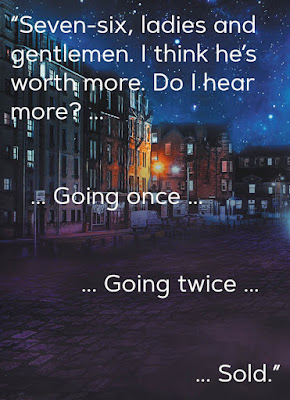 This is the first book I’ve read by this author, and I thought the writing was solid, the story had a distinctive plot with interesting characters, and it definitely held my attention the whole way through the book.  It did seem that while starting out that you’re just set down in the middle of a situation and not really given any background up front behind what Primrose is, and how Connor came to work there.  This information eventually gets revealed, but at the beginning of the story I did feel just a bit lost—though I did wind up working out everything without impacting my enjoyment of the story.

There are quite a few characters here, the majority of whom are members of the various teams at Primrose including one of the main characters, Connor.  His title might be Personal Assistant, but he’s really a whole lot more than that.  It was easy for me to relate to his character, and I warmed up to him right away.  Noah is a much more complex character thanks to his ex-alien status, and I thought that the alien elements that contributed to his complexity were unique and made for a fascinating character.  His character was one with whom I could sympathize given the circumstances that led to him being stranded on Earth, and that he continues to have to live with for many, many, many years.  The connection between Connor and Noah lends itself toward a soul mates bond, but one that develops slowly over time.

Much of the story focuses on the sci-fi and alien elements, and a ring of dealers and buyers who trade in alien artefacts—as well as aliens themselves—and there is plenty of action and suspense to be found in the cases which Primrose handles.  There is definitely an element of romance as things develop between Connor and Noah, but it doesn’t overtake the story.  There’s also the fact that Connor has just started seeing someone else (Jason) shortly after the start of the book, and that plays a part in the overall story as well as when it comes to Connor and Noah.

Aliens, Smith and Jones was an intriguing story that will keep you on your toes as you read.  You can expect more on the case solving side of things than the romance side, though I’m hoping that there might be more books to come that would give more insight into Connor and Noah’s relationship.  They didn’t seem to get as much page time devoted to the evolution of their relationship, something I would have expected given the connection they have between them.  There is also a bit of a plot hole regarding Jason, which did confuse me as I was reading since I couldn’t understand why Connor stayed with him as long as he did.

Overall, my rating for this book is hovering between 3.5 and 4 stars, mostly because I can’t decide how much that plot hole should affect the rating.  If that could be cleared up, I’d definitely go up to a 4.5.  This story is meant for readers 18+ for adult language, some violence/torture, and a bit of sexual content. Blaine D. Arden is a purple-haired, forty-something author of queer romance mixed with fantasy, magic, and suspense who sings her way through life in platform boots. She is an EPIC Award winning author, and her scifi romance “Aliens, Smith and Jones” received an Honourable Mention in the Best Gay Sci-Fi/Fantasy category of the Rainbow Awards 2012.


Born and raised in Zutphen, the Netherlands, Blaine spent many hours of her sheltered youth reading, day dreaming, making up stories and acting them out with her Barbies. After seeing the film “An Early Frost” as a teen in the mid-eighties, an idealistic Blaine wanted to do away with the negativity surrounding homosexuality and strove to show the world how beautiful love between men could be. Our difference is our strength, is Blaine’s motto, and her stories are often set in worlds where gender fluidity and sexual diversity are accepted as is.