New Release-Excerpt: HER GENTLEMAN DOM by Kate Allure (Getting Serviced #2) 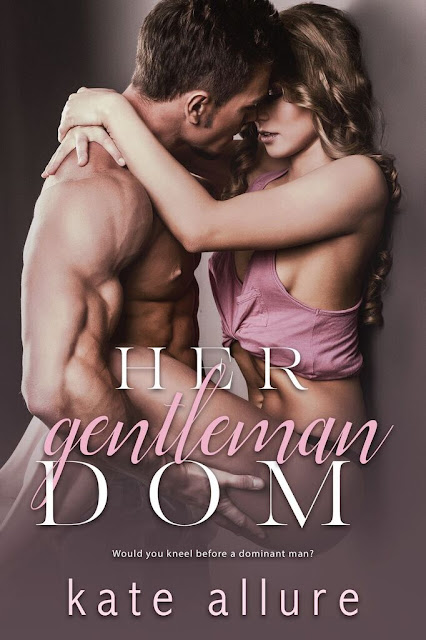 Would you kneel before a dominant man?

Lilli is thrown together with a wickedly sexy British architect on a San Francisco building project, but her paralyzing attraction to the man could ruin her career. An experienced Dom, Finn never initiates unsuspecting, young women into his dungeon, but hints of her sexual subservience along with her can-do spirit are irresistible. After a night of passion, Lilli discovers his true nature and runs, only to return later and offer her submission, but Finn doubts she'll have the moxie to survive his training. It's up to Lilli to prove she can flourish under his loving bondage.

Be prepared to fall to your knees.


Buy it exclusively on Amazon

Her hope that he wasn’t as good-looking as she remembered was dashed. He was effin’ gorgeous in his nerdy, quirky sort of way, his horn-rimmed glasses and the slightest shading of gray at his temples making him look not distinguished but somehow naughty. She could see him in a library at Cambridge, a professor overseeing a flock of drooling coeds, all more than willing to earn some extra credit in the stacks. On their knees.

Startled, Lilli shook her head, dislodging the dirty image of her on her knees in front of his crotch.

He extended his hand to shake hers, and when their fingers met, electricity shot through her, right to her toes, warming the sensitive parts in between. Realizing he was waiting while she stood there staring, Lilli turned away before he could see her blush. He’d seen enough of those the first time they met.

“Let me give you a quick tour.” She started walking toward the back of the building.

Finn followed her. “I’ve set aside the entire morning, so no need to rush.”

She threw him a smile over her shoulder. “That’s great.”

It wasn’t great, not unless she could control her attraction to him. Her palms were sweaty, and she stifled an urge to giggle. Stop this!

Walking briskly, back straight, Lilli led him to the kitchen. Facing him, she held her head high and gave him her best attempt at a confident but professional smile.

“I know the building looks terrible, but it’s structurally sound. When the Fresh Start board first saw it, they nearly voted no to accepting the donation. Now that you’re here, I hope you don’t find any insurmountable problems.”

Eyes twinkling, his gaze swept her from toe to head, the slightest smile curving his mouth. “Don’t worry, I’m very good at seeing beneath the surface to the hidden potential underneath.”

Kate Allure writes erotic romances that celebrate sensuality, sexual exploration and, of course, true love. Writing for Entangled Publishing and Sourcebooks, her books feature real women meeting handsome professional, working men as they go about their everyday lives—and the fun they have behind closed doors! Her work is “Escapism of the richest, most decadent variety, 4 stars" (RT Book Reviews), and "sizzling and sensual. Intense chemistry, great characterization, and a kinky page-singeing ending will have readers clamoring for more," (Publishers Weekly). Kate’s non-fiction writing includes the Romance Readers Guide to Historic London under the name Sonja Rouillard. Beyond writing, Kate’s passions include traveling and exploring all things sensual with her loving husband.