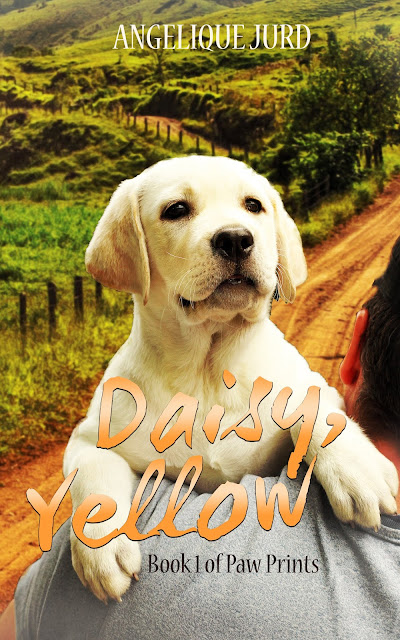 Just months after breaking up with his boyfriend, Noah Jenkins inherits his grandfather's farm and he decides it's time for a change of scenery. He packs his bags, buys a dog, and moves onto the property. When his Labrador puppy Daisy gets hurt he meets local vet Hunter Ross and life starts to look interesting again.

Hunter Ross has always lived in small, conservative Newton, in rural Illinois. At 39 he's never been in love and never had a lover and may have neglected to tell anyone he's close to that he's gay. It's never been a problem - until Daisy, Yellow and her owner, Noah, show up.

Is Noah's love enough for Hunter to risk everything? Does Hunter have the strength to make the hardest choices he'll ever make and survive? 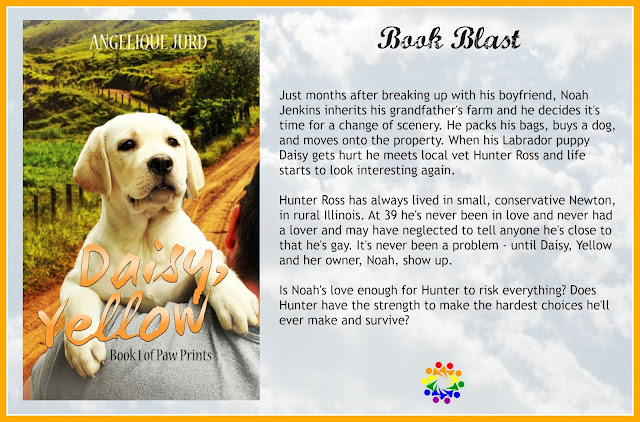 The great thing about small towns it turns out is that delivery is free and it’s quick. His new furniture will arrive tomorrow morning, which gives him time to get the living room ready. The parking lot in front of the clinic is empty but Noah can see Hunter’s truck parked further back and, on a whim, he follows the driveway down. He parks, unbuckles Daisy from her harness, and clips her leash on before he gets out of the car. When he turns around, Hunter is leaning against the doorway, wearing low slung jeans and a threadbare tee-shirt, arms crossed over his chest.

“Hi,” Noah croaks. His mouth and throat have gone dry and when Daisy pulls the leash free from his grasp, he barely notices. Hunter pushes the screen door open with a bare foot and she rushes inside.

“Sh*t, sorry!” He leaps after her, but Hunter doesn’t seem concerned, only amused.

From the depths of the house comes a volley of high pitched barks followed by an angry hiss.

Noah trails behind him as Hunter goes inside, taking in his surroundings as walks. The cluttered living room is small with plain, simple furnishings in faded colors. In contrast, Noah notices, the sounds system, hooked to a laptop and a flat screen television, is state of the art. In the middle of the room stands the cat from the clinic, back arched and tail puffed up. Daisy bounces forward with a yip only to be met by a grey and white paw that smacks her nose three times in quick succession and sends her scuttling back to Noah with a yelp and a whimper.

As he picks her up he spots two scratches across her nose, both beading with blood.

“Hey, your cat scratched my pup.”

“Your pup tried to chase my cat.”

Annoyed, Noah clutches Daisy to his chest and braces his shoulders. She’s bleeding.

“You should control her better.”

The statement is met by laughter. That he likes the sound of it annoys Noah even more than the laughter itself.

“She’s a cat. How do you propose I control her?”

“I don’t know but you’re a vet, you should be able to think of something.”

Hunter steps over and peers at the scratches on Daisy’s nose.

“She’ll live. You can trust me on this, I’m a vet.” The mocking tone makes it very clear what Hunter thinks of Noah’s reaction. He bends and gathers Rosie up and puts her on the back of an armchair. She immediately jumps off, flicks her tail at the room and saunters down the hallway.

Noah is about to protest again when Hunter leans forward and brushes a kiss over his mouth. It’s brief and rough, over before Noah can even register it’s happening. Stunned, he runs his finger over his bottom lip and hugs Daisy to his chest as he watches Hunter walk away, calling over his shoulder as he goes.

“Do you want coffee?”

Yes, M/M romance books that have one of the main characters very closeted tend to irk me a bit, but in the case of Daisy, Yellow, the more narrow-minded small town setting does a lot to temper that ire.  I can’t imagine how Hunter must feel, especially in one of the more dramatic and upsetting scenes late in the story.

Hunter is 39 and has always been in that closet—and has never done much physically with anyone…man or woman…in all that time.  This gives his character an touch of innocence when it comes to interacting with others on a romantic level, but also makes him very skittish once he and Noah start seeing each other (all on the very down-low of course).

Noah is that adorable city guy who’s suddenly in the middle of a bit of country life, which does make for some funny moments.  He and Hunter have excellent chemistry together, and their relationship unfolds slowly since Noah doesn’t want to push Hunter due to Hunter’s lack of experience.  During that relationship development we get to see the deep bond that forms between the two, and the whole time I was waiting for the other shoe to drop when it came to Hunter having to decide between Noah and his current life.

There are some very distressing scenes that come up once word somehow gets out about the two of them, ones that sadly are still very prevalent in many areas (and not just small towns), and in this case those scenes broke my heart.  But I did like to see how Hunter reacted to what came about, coming out a stronger character in the end.  And speaking of the end…the way things wrapped up at the end of the story felt a bit too quick for me, and it did leave things open making it feel more like a happy-for-now (HFN) ending then a fully resolved HEA (happily ever after).

As for Daisy?  I'm about ready to go pick out my own Daisy after reading this.  I love pets in books, but especially dogs and Daisy was absolutely adorable!

Though I would have liked a more solid ending, Daisy, Yellow was still a very solid 4-star read for me, and my curiosity is piqued for whatever the author has in store for this series.  This book is meant for readers 18+ for adult language and sexual content. 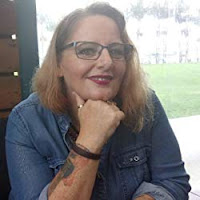 A former print journalist and editor, she has over the years, written about a wide variety of topics from politics to duck breeding to rock concerts. Her interest in fandom studies was sparked in 2015 when she watched Supernatural for the first time and she has been fascinated by the intersection between fans and creators ever since and is currently completing an MA (Media Studies) in the subject.

She likes cold champagne, hot coffee, neat whiskey, loud Springsteen, and the Winchester brothers kicking butt. When she's not writing she likes to color, watch movies, and get more tattoos. 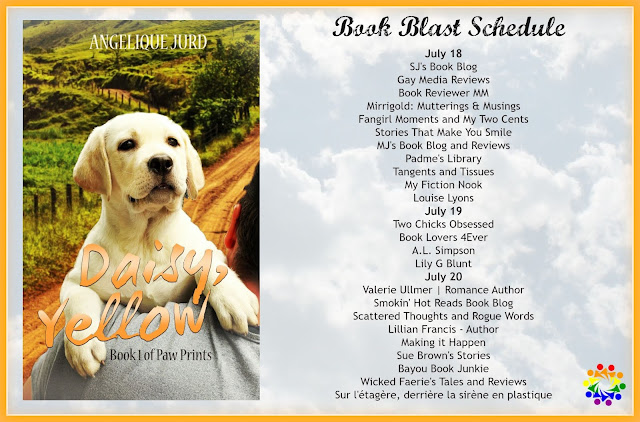