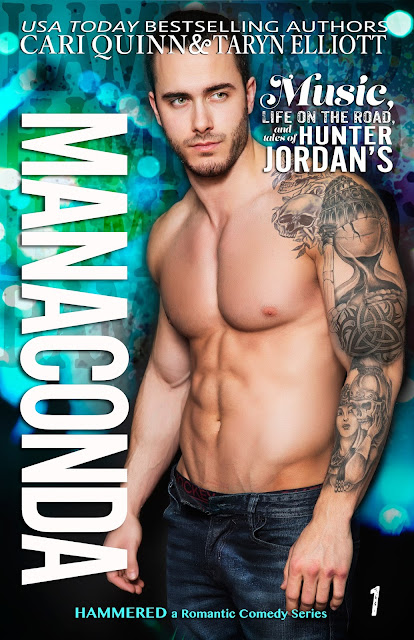 My name is Hunter Jordan, lead singer of Hammered and no, I didn't name my cock Manaconda.

On the front cover of their damn magazine.

I still haven't lived it down. And now our record label wants to maximize the frenzy.

So, I have a brand new PR person–Kennedy McManus.

And she's making me insane.

I don't know whether to ignore her, yell at her, or push her up against the wall and kiss her smart mouth shut.

BEYOND OBLIVION - A Rockstar Romance full of sexy fun set within the world of our Lost in Oblivion series! You never know who you'll see show up in the books.

“Maybe we should go back.”
I shook my head. “Maybe we can sneak around. Seems like there wouldn’t be any fans back here.”
“Famous last words,” she muttered.
I strode out, gravel crunching under my boots.
“You know, I’m not a huge fan of this dragging me around like a child.”
I turned back to her, dragging her into my body. “Nothing child-like about you, Kenny.” I bent down to her, our noses touching. “I just want a little alone time with you.”
A loud engine started up.
“There’s an elevator back there.” She pointed with her thumb. “I bet we could do a lot of things in your room, my room—whatever.” She rose on her toes until our lips were a breath apart. “You can give that whole seven thing a go.” She dragged her nail over my bottom lip. “I don’t believe you’ll make it to seven, but I’m willing to let you try.”
“I—”
“Oh, my God, that’s Hunter!”
The hiss of hydraulics and stomp of many feet did not bode well.
I closed my eyes. “Sh*t.”
“What?”
“Please don’t be what I think it is.”
“What?”
A trio of people in black shirts with our new album on the front were standing in front of a huge bus. “Can you run in those things?”
She looked affronted. “I can do anything in heels.”
“I hope so.”
A woman in her twenties pointed our way. “Is that him?” she shrieked.
“Fan club.”
“What?”
“This is where the fan club bus is parked.”
“They should be at dinner. Why aren’t they at dinner?” Kenny asked with rising panic.
“Guess it’s over.” I sprinted to the door we’d just come out of. “Son of a bitch.” I twisted the handle but nothing. “It must have locked after us.”
She slapped the keypad. “Ya think?”
“Not helping.” I darted a look past the bus, along with the line of at least seventy people lined up to board. Definitely couldn’t go that way.
“They’ll eat you alive.”
“No kidding.”
Three women broke off from the crowd and headed our way. As soon as they did, twenty more followed. I dragged Kenny with me to the front of the bus and around the side. The bus driver looked down at us and shook his head.
No help there.
The people that had boarded the bus were pointing at us as we ran to the other end. I shot by another line of cars and zig-zagged around another bus and saw a familiar logo. “Thank God.”
“Where did he go?” Came shouts that were way too close.
“Where are we going?” she hissed.
“My bus.”
“Your bus?”
I dragged her behind me as I ducked behind a black truck we used for our equipment. It has been a stripped down stage, but we still had a lot of instruments between Keys’s pianos, the entire percussion set up that Wyatt used, all the guitars, amps, and digital network we used—we needed a truck no matter what.
“New plan.” I unlatched the back of the rig and lifted the rolling door. “Get in.”
“Are you freaking kidding me?”
I stared down at her. “Does it look like I’m kidding?”
She groaned. “I can’t get up there.”
I lifted her until her knee was on the base of the truck ledge. She scrambled in as the scraping of heels and running feet got closer.
“Move it, Kenny.”
Her skirt rode up as she dragged herself inside. I threw her a soft whistle. She turned back to me with murder in her eyes. I squashed down a laugh, rolling in after her, tugging the door down behind me with a bang.
“I hate you.”
I just smiled into the dark.

Okay, now that was fun.  You've got your classic rockstar bad boy type male lead (Hunter) who actually is more down-to-earth than most of the world realizes, and a female lead who starts off serious and in charge, only to have everything go haywire on her right from the start (Kennedy).  And when things don't go as planned, sometimes you just have to roll with it, right?  Easier said than done.

Manaconda-just the title skews your expectations of the story-is actually fun, dramatic, searingly hot, and has a full complement of great supporting characters.  Oh, and be advised--things do not wrap up in this book.  Even though it might seem like the story is heading toward an ending, it's left wide open on the very last page (so please don't say you weren't warned!).

I found that the story flowed quickly and smoothly, and it held my attention tightly from the moment I picked it up.  While we didn't get a lot of depth from the supporting characters in this installment, there was enough to have my interest piqued for a lot more for this series (can't wait for Bats and Wyatt's stories...and wouldn't mind a side story for Noah as well).  The authors leave you wanting for more, and I for one am eager to explore more in this series.

For a story that I initially wasn't expecting any more from than your basic rockstar romance, I actually got more power behind its punch and a nice dose of drama and tension to go along with the scorching hot and steamy intimate scenes (oh, the quest for seven...you'll get it when you read it...).  This was a rock-solid 4-star read for me, and fans of rockstar romances will devour this story.  Recommended for 18+ due to adult language and explicit sexual content.

USA Today Bestselling duo, Cari Quinn & Taryn Elliott, have been having a ton of fun with rock stars, but they also love a good MMA fighter story, oh and a suited guy. Can’t forget the suited guys. Getting these two authors together always includes some sweet & snarky moments, a lot of angst, and unlimited heat.
Oh, and let's not forget the jaw dropping moments. They really love those.

Rafflecopter Giveaway ($25.00 eGift Card (Amazon, B&N or iTunes) and an Ebook copy of THE OPENING ACT)
a Rafflecopter giveaway