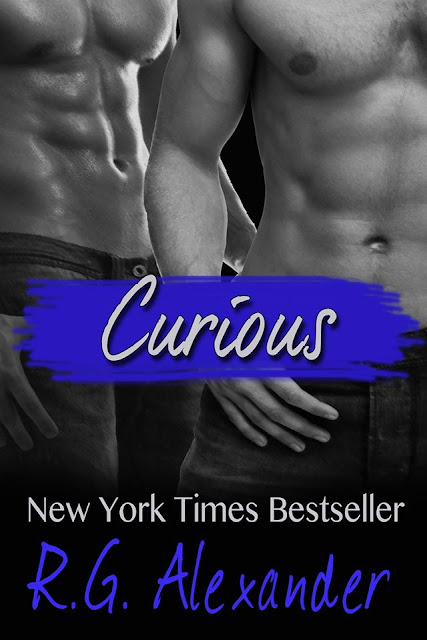 Are you Curious?Jeremy Porter is. Though the bisexual comic book artist has known Owen Finn for most of his life—long enough to know that he is terminally straight—he can’t help but imagine what things would be like if he weren’t.Owen is far from vanilla—as a dominant in the local fetish community, he sees as much action as Jeremy does. Lately even more.Since Jeremy isn’t into collars and Owen isn’t into men, it seems like his fantasies will remain just that forever…until one night when Owen gets curious.Warning: Contains explicit m/m nookie. A lot of it. Very detailed. Two men getting kinky, talking dirty and doing the horizontal mambo. Are you reading this? Do you see them on the cover? Guy parts will touch. You have been warned.

One of the things I loved about the main characters, Owen and Jeremy, is that they are both pretty open with just about everything—except with their feelings for each other. Neither hides their individual proclivities from the other. And once Owen’s curiosity about being with another man is admitted, things really start to heat up—to a scorching, off-the-charts level. The problem for Jeremy? He’s got feelings…real, deep, true feelings involved…which makes for some really engaging reading and this had me thoroughly invested in both his and Owen’s characters.

There’s some great supporting characters in Owen’s family as well as his and Jeremy’s friend Tasha. What I really liked about the Finns was how supportive they are of each other, with everyone coming together when needed—and they include Jeremy in their family as well.

I’ve always said that M/M romance comes across as so much more emotional than traditional M/F stories, and Curious demonstrates that perfectly. The emotional impact is evident throughout the story, giving the story added depth and pulling the reader even further in. I enjoyed getting Jeremy’s inside thoughts when he and Owen are together-this is an excellent example of the added emotion attached to an M/M romance.

View all my reviews