It is the first book in a series of standalone books/novellas and does not end on a cliffhanger.

A fairy-tale retelling with a paranormal twist!

Concerned for his gran’s health, Red braves the snow-covered forest to ensure she’s safe in the worsening weather. After several encounters over recent months, Red is both hoping to run into the huntsman again whilst also dreading he might because he knows their friendship can’t lead to more, no matter how much he wishes it might.

A glimpse of his huntsman distracts Red and he stumbles away from the safety of the woodland path straight into the danger known as the wolf of Bowland. Shaken, but unharmed, Red manages to escape to the safety of his gran’s cottage to recover.

Despite Red’s reservations, the pair grow closer after they end up snowed in together at the huntsman’s cabin, but can Aldrich help Red accept there is nothing wrong with who he is? Or will Red let his secret and insecurities come between them? Especially when he finds out his huntsman is hiding a secret of his own.

This M/M romance from Beth Laycock features friends to lovers, an age gap, snowed-in together, shifters and witches, and of course a HEA.

I stopped as I reached the twisted oak and drew in a deep breath, and then slowly blew it out in a plume of white vapour. Hope warred with trepidation. I didn’t know the man all that well, we’d met a handful of times over the last few months in the woods to stop and talk, but I knew enough that I liked the man and wanted to discover more about him.

And those encounters in the secluded woods had left me wanting more. More glimpses of the toned body that was hinted at beneath his clothes. More opportunities to listen to his lilting, almost musical voice as we chatted about everything and nothing. More chances to lose my senses in his intoxicating musky scent with that spicy hint of cinnamon.

And didn’t that just spell trouble with a capital T. Looking forward to seeing the huntsman could only lead to heartache. I doubted one night with him would be anywhere near enough. And I didn’t do relationships. Couldn’t.

With a brush of my palm over the twisted oak’s trunk, I veered off to the right and towards Gran’s. The hairs on the back of my neck lifted and as I raised my gaze…there he was. As if thinking about him had conjured him out of thin air, and I sucked in an icy breath.

Crouched in the distance, blurred by the snow that had begun to fall again, but I’d have recognised him anywhere. I took a step towards him. Adrenaline surged through my veins as excitement and anticipation spurred me closer. I couldn’t drag my gaze off him as he reached out a hand to the snow.

What is he doing?

Too engrossed by the vision of the huntsman, I must have wandered to the edge of the path because I stumbled over a small boulder hidden beneath the blanket of snow. I cried out as I fell, throwing out my hands to break my fall and to try to keep me on the path as my gran’s warnings rang out in my head. Never leave the path, Red. It’s not safe in the woods if you’re not on the path, that’s the only place I can protect you out there.

But it was too late. As my elbow connected with the ground, it was cushioned by the soft earth of the forest floor instead of hard stone. Pain ripped through my body, and every bone ached as the curse took hold of me.

I rolled onto my side as my hands morphed into paws, claws flicking out, and grey fur sprouting over every inch of my skin. My eyes shifted position and my vision dimmed to only muted colours as my sense of hearing heightened—the scuffle of some small animal scurrying away along a branch, the whisper of the snow falling on the ground, the slow, deep breaths of the huntsman in the distance—and my ears twitched.

My fangs dropped from my gums to replace my useless regular teeth, and my nose lengthened into a snout as the smells of the forest overwhelmed me. I could scent the huntsman even from this distance. And that tug I felt in my chest every time I saw him intensified to the point I almost threw my head back and howled.

The cinnamon tang of him had saliva dripping from my fangs, and I shuddered at the thought of sinking them into his warm, soft flesh. I shook my head, trying to rid the idea from my mind as I scrambled to my paws, but I could almost feel the give of his skin beneath my fangs as they sliced through him.

My wolf did not control me. I would not bite a human. My heart throbbed at the thought, especially at the notion of harming the huntsman. It seemed wrong somehow, even though it was in my wolf nature to kill, and I couldn’t deny that weird urge—bite, bite, bite—whenever I was around him.

The snap of a twig made me flinch. It was so loud and brought my surroundings back into sharp focus. A glance over my shoulder confirmed my worst fears. The huntsman was headed straight for me.

I bounded away in the other direction, dodging between trees in the hope of shaking him off my trail. Of course, I didn’t. He was a huntsman and he easily tracked my paw prints in the snow despite the fact he couldn’t match my pace.

I circled back to where I’d stumbled off the path, crossing over my original paw prints to throw him off my tail. My tongue lolled out despite the cold nip in the air. I darted behind the twisted oak tree, my ears twitching as I listened for the huntsman. Nothing.

I hung my head and drew in a breath. The big bad wolf escapes his hunter. 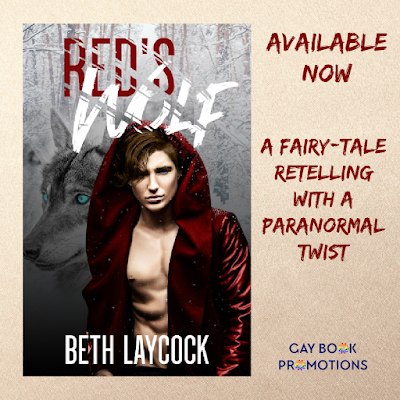 Red’s Wolf is a modern retelling of the Red Riding Hood fairy tale, though it’s not going to be what you might expect with the interesting twists it throws in.  This was a pretty quick read, maybe two to three hours depending on your reading speed.

Red’s life is a bit complicated, and he thinks that will keep him from having any kind of relationship.  But there’s more than meets the eye to a lot of things in this story, so be prepared to expect the unexpected.  Red and his huntsman, Aldrich, definitely have some chemistry together.

Red’s Wolf made for a few hours of enjoyable reading.  While I would have loved to have seen this more fleshed out to provide additional background for the characters, and I think this story has the potential to develop into more, as-is it is quite entertaining and was a 4-star read for me.  This book is meant for readers 18+ for adult language and sexual content.

Beth Laycock’s books are influenced by her time living overseas as well as the gritty, urban landscape of the north of England where she grew up. She has been reading romance since she was old enough to tell herself that line every book lover does—just one more chapter.

As a teenager, she attempted to write her first novel, and many more since then are still gathering dust on her bookshelf. It wasn’t until she discovered the M/M genre that her muse showed up and refused to quit telling her stories about beautiful men finding love together. She hasn’t stopped scribbling them down since. Beth’s muse usually shows up when she is in the shower, is allergic to cleaning, rarely lets her watch TV, and insists she drinks copious amounts of coffee so she can turn caffeine into words.

Beth’s books range from sweet to sexy, long to short, contemporary to paranormal, but a HEA is always guaranteed.

an ebook from Beth's backlist plus a $10 Amazon gift card